I saw this yesterday in the Discovery Channel’s Curiosity.com. In answer to the question “do intelligent people drink more alcohol,” two separate answers reached the same surprising conclusion. When I say surprising, I mean it will come as a shock to the anti-alcohol wingnuts who continue to deny any positive attributes whatsoever to drinking alcohol. Because while the answer isn’t that new, or that unpredictable, especially if you’ve spent a lot of time around responsible drinkers — wets vs. drys — you probably already knew that the answer is simply yes.

Their first answer was from Ian O’Neill, Discovery News’ Space Producer, who wrote:

Surprisingly, a recent study using data from the National Child Development Study in the United Kingdom and the National Longitudinal Study of Adolescent Health in the United States indicates that intelligent people really do drink more alcohol.

By tracking the intelligence of children under the age of 16 and then revisiting them as adults, it turned out that kids who were considered “more bright” than others in their age group ended up drinking more alcohol later in life. Even after researchers canceled out marital status, parents’ education, earnings and childhood social class, smarter kids were drinking more alcohol as adults.

Why would intelligent people drink more alcohol? Some researchers suggest that as the production of alcohol is only a recent invention (within the last 10,000 years) and our ancestors had gotten their alcohol buzz from rotten fruit, the more intelligent humans would be more likely to drink modern alcoholic beverages. Although this is attractive evolutionary speculation, it’s more likely the real reasons are more complex.

The second answer was presented not by an individual, but as a group answer by Curiosity:

It’s a myth that alcohol kills individual brain cells, but drinking can cause long-term brain damage. That’s why researchers were surprised in 2010, when data from Britain and the United States revealed that more intelligent children, when grown and of legal age, tended to drink more alcohol than their less intelligent peers. The researchers were able to control for other factors that might affect a person’s propensity to drink, such as marital status and income, and the findings related to childhood intelligence held up. Researchers aren’t exactly sure why this link exists; one writer posited that drinking alcohol for pleasure is a relatively new thing, evolutionarily speaking. Intelligent people tend to try new things, so the writer argued that people who enjoy a glass of wine with dinner are actually performing a novel act when you take a long view of history.

One of the longitudinal study each answer is referring to was The National Longitudinal Study of Adolescent Health (Add Health) conducted here in the U.S., while the other was part of the UK’s massive National Child Development Study in the UK. I started writing about some of the conclusions drawn from the UK study several months ago, abandoning it when I got busy with other projects, but it’s still pretty interesting. Satoshi Kanazawa, an evolutionary psychologist who writes a blog for Psychology Today entitled the Scientific Fundamentalist, wrote More Intelligent People Are More Likely to Binge Drink and Get Drunk which covered much of the same ground. Although in it Kanazawa focuses on something I strongly disagree with. “Not only are more intelligent individuals more likely to consume more alcohol more frequently, they are more likely to engage in binge drinking and to get drunk.” That propensity to “binge drink,” I’d argue, has more to do with the narrowing definition of binge drinking than any actual increase in drinking. Binge drinking used to be a defined qualitatively but over the past few decades has become quantitative, meaning it’s become defined as a specific number of drinks in a set period of time, absent any context or mitigating factors (of which there could be many). And even that nonsensical number keeps shrinking and changing.

Kanazawa wonders aloud if that should be worrying. I have to say “no, Doc, it’s not.” Here’s why. Look at this chart below. It shows the correlation between intelligence and incidence of “binge drinking,” as defined using the modern absurdity of five drinks in a row. 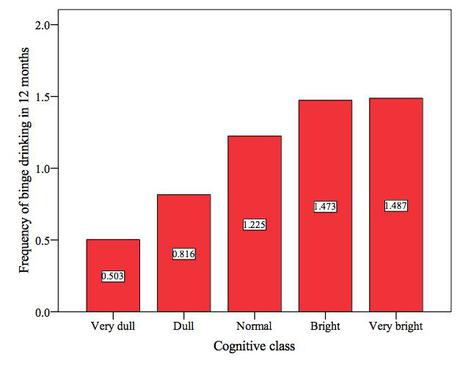 But what this chart really says is that the most intelligent among us have just under five drinks one and a half times a year, roughly three times every two years. The horror! Or is it?

Even “controlling for age, sex, race, ethnicity, religion, marital status, parental status, education, earnings, political attitudes, religiosity, general satisfaction with life, taking medication for stress, experience of stress without taking medication, frequency of socialization with friends, number of sex partners in the last 12 months, childhood family income, mother’s education, and father’s education,” the smarter you are as a child, the more you’ll apparently drink as an adult. Isn’t it at least possible that the intelligent people are on to something? Maybe it’s not such a terrible thing after all.

Another psychologist who also writes for Psychology Today, Stanton Peele, wrote sort of a rebuttal to Kanazawa. In Are More Intelligent People More Likely to be Alcoholics?, he ponders.

So, we can ask, is getting drunk ‘once every other month or so good, bad, or neutral? Is it harmless — even beneficial? Is it a social convention? An exploration of the universe? Fun for people who are better off and can spare the time and who can protect themselves while having a night out drinking? Or is this behavior pathological, a precursor to alcoholism? Specifically, are more intelligent people more likely to be alcoholics?

To this, he posits three possibilities.

Which, he notes, is odd, since it would seem to suggest “childhood intelligence is a risk factor for alcoholism.” Are parents putting their children at risk by sending them to good schools, making them do their homework or encouraging them to read? Peele declares this to be something of a “quandary — something most people generally value leads to a behavior of which we disapprove.” And Kanazawa concludes that since “more intelligent children are more likely to grow up to engage in binge drinking and getting drunk,” then “occasional drunkenness is incompatible with regular moderate drinking.”

The fallacy with both these lines of thought, I believe, is that occasional drunkenness may not be the demon the medical community has come to believe. In their zeal to quantify everything, they’ve removed the problems in problem drinking and reduced it to a simple formula that clearly doesn’t work. By their standards, I’m an undisputed binge drinker, and yet I’d warrant I’m drunk less than many people. I can state clearly and unequivocally that I’m not an alcoholic, having grown up with and around countless actual problem drinkers. And without trying to sound too egotistical, I’m not an idiot, at least. I did reasonably well in school. Maybe that’s why I drink more now? Since most of the people I know also drink a fair amount, does that means beer drinkers tend to be smarter than non-drinkers? My anecdotal evidence says yes. But then I’m very biased. Don’t we all want to believe we have smart friends? Maybe, but I’m just happy if they like good beer. Of course, that may possibly be one and the same thing.