I stumbled upon this interesting write-up of the Beers of Martin Luther on a Lutheran website, Cyberbrethern. The post is based on notes from a talk given at a Men’s Breakfast at Good Shepherd Lutheran Church, Fayetteville, New York in April of 1997. Keith Villa of Blue Moon Brewing is thanked for “describing how the beers of Martin Luther’s era would have looked and tasted.” 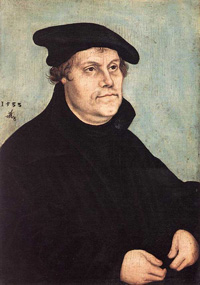 The article discusses German beer in the middle ages, both homebrewed beer and brews made at Abbeys, and then speculates which beer of the time would have been Martin Luther’s favorite. This proved easier than you might imagine.

Frederick Salem, in his Beer, Its History and Its Economic Value as a National Beverage (1880) notes, “Luther’s fondness for beer is well known, and on the evening of that eventful day at Worms, April 18, 1521, the Duke Erich von Braunschweig sent him a pot of Eimbecker (Einbecker) beer, to which he was specially addicted.”

Michael Jackson also mentioned this connection in his New World Guide to Beer, saying “Luther received a gift of Einbeck beer on the occasion of his wedding.”

The article goes on to suggest that Luther preferred homebrew over beer from commercial breweries, finding the latter to be “a curse for Germany.” But in an apparent contradiction, Luther “drank at home.”

One biographer notes, “The German prophet became a patriarch, and the living room was dominated by his presence. He enjoyed his beer and had a great mug with three rings on it, one ‘the Ten Commandments’, the next ‘the Creed’ and third ‘the Lord’s Prayer’. He boasted that he could encompass all three with ease.”

But he was also a champion for moderation, and in sermon he gave in 1539, preached the following:

“It is possible to tolerate a little elevation, when a man takes a drink or two too much after working hard and when he is feeling low. This must be called a frolic. But to sit day and night, pouring it in and pouring it out again, is piggish… all food is a matter of freedom, even a modest drink for one’s pleasure. If you do not wish to conduct yourself this way, if you are going to go beyond this and be a born pig and guzzle beer and wine, then, if this cannot be stopped by the rulers, you must know that you cannot be saved. For God will not admit such piggish drinkers into the kingdom of heaven [cf. Gal. 5:19-21]… If you are tired and downhearted, take a drink; but this does not mean being a pig and doing nothing but gorging and swilling… You should be moderate and sober; this means that we should not be drunken, though we may be exhilarated.” 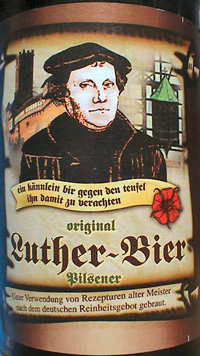 There is at least one Luther-Bier, a German-style pilsner brewed by Einsiedler Brauhaus. I’m not sure what that adds to the story, but I found in interesting all the same. As far as I can tell, it was a special release and there’s even a separate website for Luther-Bier, but there’s almost no additional information there. But you can see the special box it comes in an etched mug at a Wittenberg website.

And I found this great quote on another church’s website:

“We old folks have to find our cushions and pillows in our tankards. Strong beer is the milk of the old.”