Today in 1968, US Patent 3484244 A was issued, an invention of Peter D. Bayne and Joseph A. Kozulis, assigned to Schlitz Brewing Co., for their “Fermenting and Aging a Malt Beverage.” There’s no Abstract, although in the description it includes this summary:

The present invention is directed to a method of fermenting and aging at malt beverage which is based on a concept directly opposed to traditional brewing practices. More specifically, the wort is introduced into a tank and pitched with yeast. Following the addition of yeast, the Wort is continuously circulated from the tank to a heat exchanger and returned to the tank in a closed flow system. A cooling medium is supplied to the heat exchanger to maintain the wort at a temperature in the range of 45 to 70 F. during the fermentation process.

When the fermentation has proceeded to a point where the specific gravity of the wort falls to a predetermined value below 5 Plato the supply of the cooling medium to the heat exchanger is terminated and the fermented wort circulating within the closed system will gradually increase in temperature due to the heat generated by the fermentation process. The temperature of the fermented wort is permitted to rise until it reaches a value at least 4 above the fermenting temperature, and generally in the range of 50 to F., and is maintained at this temperature by controlled circulation of the cooling medium. At this time the yeast is still present in the beer and the beer is continuously circulated through the system for a period of about one to five days and until the diacetyl content falls to a value below 0.2 p.p.m. and the acetaldehyde content decreases to a value below 5 p.p.m. At this time, the beer is considered to be fully aged or matured.

At the end of the maturation cycle, the temperature of the circulating beer is reduced to a value of about 29 to 32 F. approaching the freezing point of beer. With the beer at this temperature, the beer is withdrawn from the tank and pumped through a centrifuge to re move the yeast. Following the removal of yeast, the beer is prefiltered and carbonated, injected with enzymes, and other additives, polish filtered, the carbonation adjusted and then is stored in government storage tanks for packaging in accordance with conventional brewing procedures. In some instances, only one filtration may be necessary to prepare the beer for packaging. 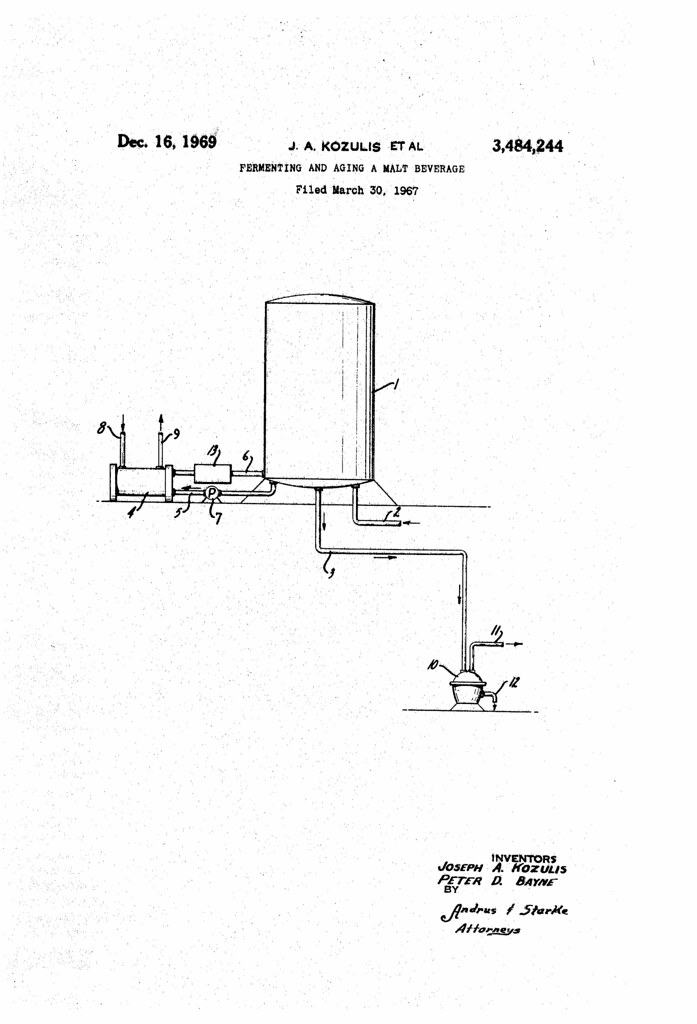