This morning Pilsner Urquell tweeted the quetion “What happened in Plzen in the 1830s to make the citizens decide to build their own brewery?” 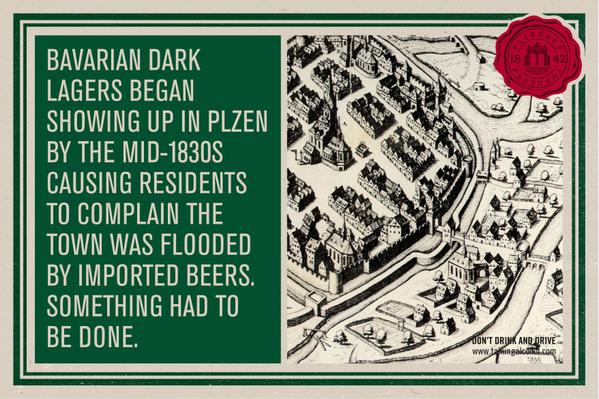 What was the town of Plzen like when Pilsner Urquell was founded back in 1842? To get a feel for things, imagine the number 563. That’s the total number of dwellings — just 563 buildings for living in — that stood in Plzen at the time of the town’s 1840 census.

Despite its small size, Plzen was still a relatively important place, especially after the construction of the military barracks that were built there in 1826 (this was crowd-funded and paid for by the citizens), after which the town’s population and strategic importance grew substantially. By 1840, Plzen had grown to 10,184 inhabitants, up from 6,447 inhabitants some fifty years earlier.

Along with the barracks, Plzen also developed a more cultivated side in the 1820s and 1830s, developing a merchant class and showing theatrical performances and concerts in both Czech and German languages. Perhaps because of that cosmopolitanism, as well as the town’s setting not far from the Czech-Bavarian border, a number of imported beers, including many Bavarian dark lagers, began showing up in Plzen by the mid-1830s. These proved to be quite popular, and some residents complained that Plzen was flooded by imported beers. Ironically, the imports were quite cheap, much cheaper than Plzen’s own beer at the time, which thus had trouble selling fast enough to keep up with its relatively short shelf life.

The result was a major problem for local beer lovers. The first solution suggested by the citizens of Plzen? A ban on all imported beer. Only after this idea was laughingly dismissed by the town’s mayor Martin Kopecký did the good people of Plzen came up with their second proposal: to build a new brewery that could compete with the imports.

It’s funny to see concerns about imports being an issue even 175 years ago, something that’s still talked about today.

The image Pilsner Urquell uses part of with the story is from 1649. It was a “copper engraving, uncolored as published,” and is a “Bird’s eye view of the city of Pilsen, published in the Topographia Bohemiae by Matthaeus Merian.” 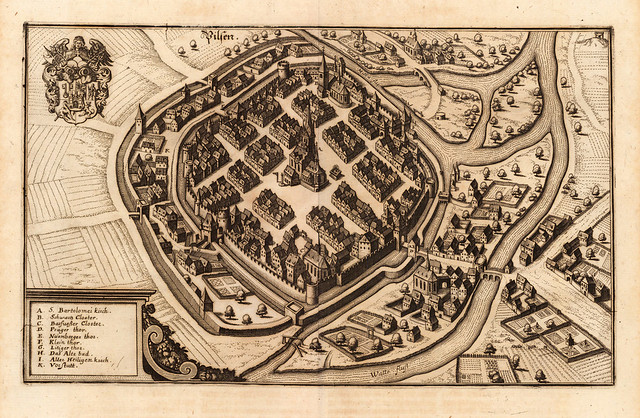