You are here: Home / Beers / Prohibitionists Picking On Past Their Primers

What is it with Alcohol Justice insulting people recently? A few days ago they called people around the world “idiotic,” and now they’re referring to the elderly as “geezers?” What happened to being an organization holding the alcohol industry to impossibly high standards? Or don’t those apply in the first person, only in the third person? Sadly, that’s probably the answer as whatever they do is championed as correct and everything — and I do mean everything — that alcohol companies and anyone who might choose to drink alcohol are doing is considered wrong.

So — sigh — what is it this time? AJ tweeted out the following this morning: 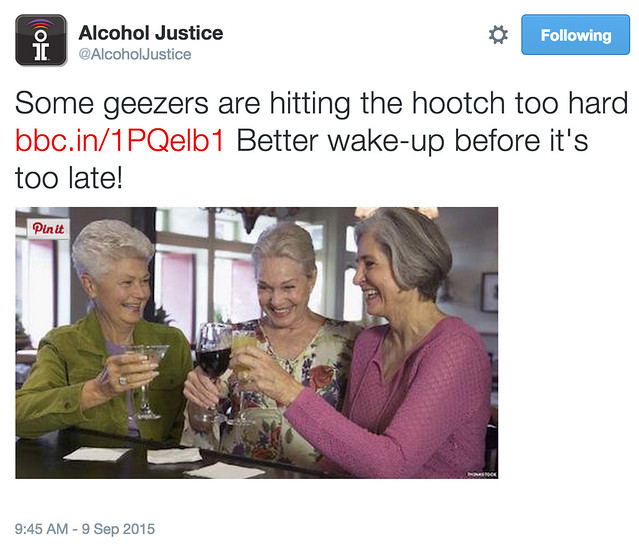 “Some geezers are hitting the hootch too hard bbc.in/1PQelb1 Better wake-up before it’s too late!”

The link takes you to an article posted on the BBC‘s health website, with the far more gentle title, Elderly people warned over alcohol consumption. So why exactly is AJ calling the elderly “geezers?” According to Wikipedia, “Geezer is a slang term for a man. In the UK, it can carry the connotation of either age or eccentricity. In the US, the term typically refers to a cranky old man.” In AJ’s tweet, of course, they show three elderly women sipping what looks like wine, champagne and a cocktail, not “hootch,” or even it’s more common spelling “hooch” (oh, AJ how many mistakes can you pack into one tweet?). Yes, hooch can mean any “alcoholic liquor,” but it usually refers to “inferior or illicit whiskey,” not the good stuff. So calling these three women geezers drinking hooch doesn’t really work, does it?

The BBC article itself, naturally, is problematic, as well. The headline is that they found that “one in five people over 65 who drink” (so only 20% and only 20% of the elderly population that are not teetotalers, meaning less than 20%) is drinking their “hooch” at “unsafe levels.”

First of all, those levels they’re talking about in the UK are arbitrary and were simply made up, as was revealed in 2007, twenty years after the guidelines for the UK had been set in stone in 1987. One committee member who’d worked on the guidelines remembered that they were simply “plucked out of the air” and had “no basis in science” whatsoever, which I detailed at the time in Target: Alcohol. So it’s pretty hard to get worked up about elderly people, and a minority of them at that, who are not following capricious, arbitrary guidelines that were simply made up.

But the kicker, for me, is that final admonishment in AJ’s tweet: “Better wake-up before it’s too late!” To which my first through was exactly the same as the nearly 300 commenters to the BBC article. “Or what?” After working my entire lifetime, and finally reaching retirement age, finally able to do the things I want to do, the last thing I want to hear is “go easy, darling, mustn’t have too much to drink” from … well, from anybody. Seriously, unless I’m falling down, incoherently drunk every single day at age 70, it’s nobody’s business but my own and Alcohol Justice and their ilk can go f*@k themselves. I’m going to enjoy my twilight years, if I can, and if I make it that far on my own, I think I can manage without their unwanted intrusion and advice. They don’t care about my health, they care about controlling people and telling them what’s good for them because they know better than you and me. It’s the true national pastime.

But what I’m still unclear about is why they’ve chosen to begin attacking people with insults and epithets, people who’ve done nothing more than live their lives as they see fit, but apparently differently from how AJ believes they should live. That’s certainly not how you win people over to your way of thinking. It just pisses them off.