Today in 1877, US Patent 192292 A was issued, an invention of Jules Alphonse Saladin, for his “Improvement in Malting of Grain.” There’s no Abstract, though it’s described this way in the application:

The object of my invention is the malting of grain, barley for breweries, or any other grains, and consists in causing grain to germinate in very thick layers (one meter or more) and in ventilating and stirring it mechanically, so as to obtain a great saving in manual labor over the old process, although producing with great regularity, and throughout the whole year, a malt of superior quality.

The apparatus and means used are as follows: First, a soaking-tub; second, a germinating-box; third, damp and cool ventilation fourth, a stirring apparatus fifth, a mode of carrying or transferring the grain from one apparatus to the other. 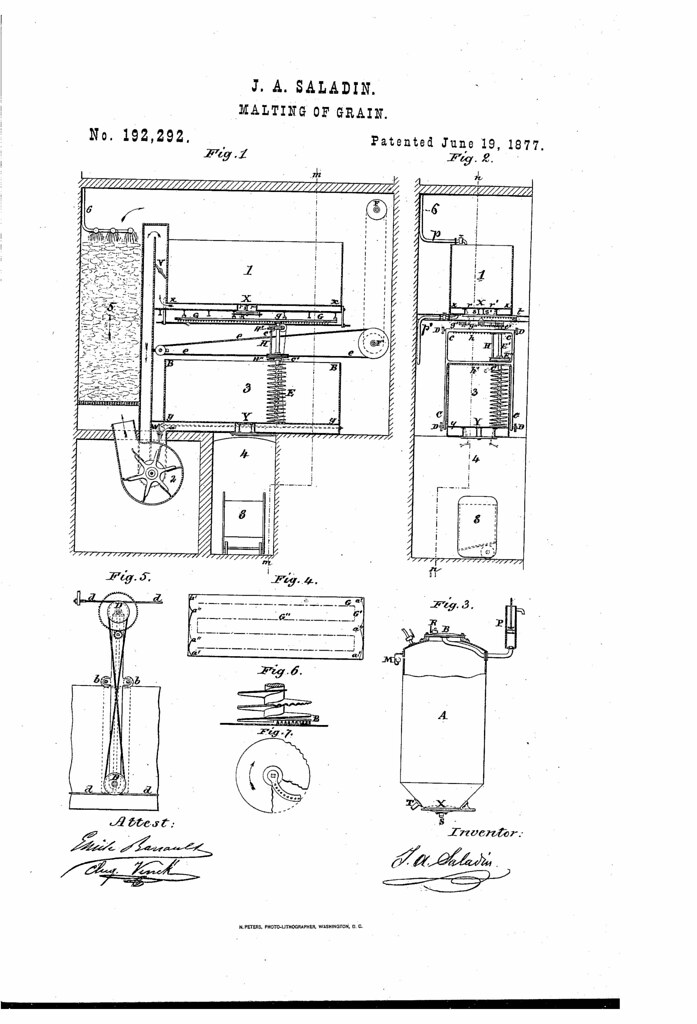 Today in 1885, US Patent 320361 A was issued, an invention of William T. Jebb, for his “Method of Preparing and Treating Starch.” There’s no Abstract, though it’s described this way in the application:

This invention relates to an improvement in the manufacture of beer and ale from barley malt and the starch extracted from Indian corn or maize.

The object of this invention is to utilize the starch contained in the Indian corn for producing a heavy, light-colored wort, without imparting to the malt-liquor an objectionable taste or flavor or impairing its keeping qualities, by extracting from the corn in a simple and inexpensive manner a crude starch which is substantially free from impurities, and then producing a wort from this starch in connection with barley-malt. 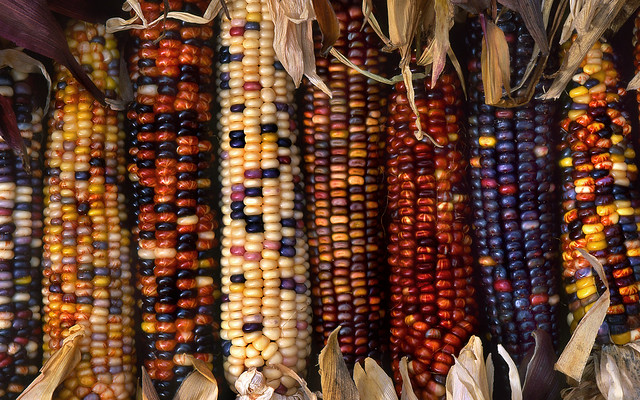 Today in 1908, US Patent 890031 A was issued, an invention of John F. Dornfeld, for his “Malting Kiln.” There’s no Abstract, though it’s described this way in the application:

I have invented certain new and useful Improvements in Malting-Kilns, of which the following is a specification.

Malting kilns as heretofore constructed comprise buildings of considerable height, in the upper part of which are arranged the malting floor or floors, and in the lower part are introduced the hot gases and. products of combustion from a furnace, together with a quantity of fresh air. No means is provided for mixing the hot and the cold air to produce a uniform temperature throughout the kiln and asa consequence the hot air rises in columns through the cooler surrounding air reaching the top of the kiln and there escaping through the ventilator at a temperature considerably in 4excess of the cool fresh air remaining in the bottom of the kiln.

One of the objects of this invention is to obviate the difficulty mentioned by mixing by mechanical means, the hot air and gases with cool fresh air, making a uniform mixture and introducing said mixture into the Further objects of the invention are to reduce the height of the kiln building, which reduction is rendered possible by locating the furnace outside of the kiln proper, and in other ways to improve the construction of such kiln. 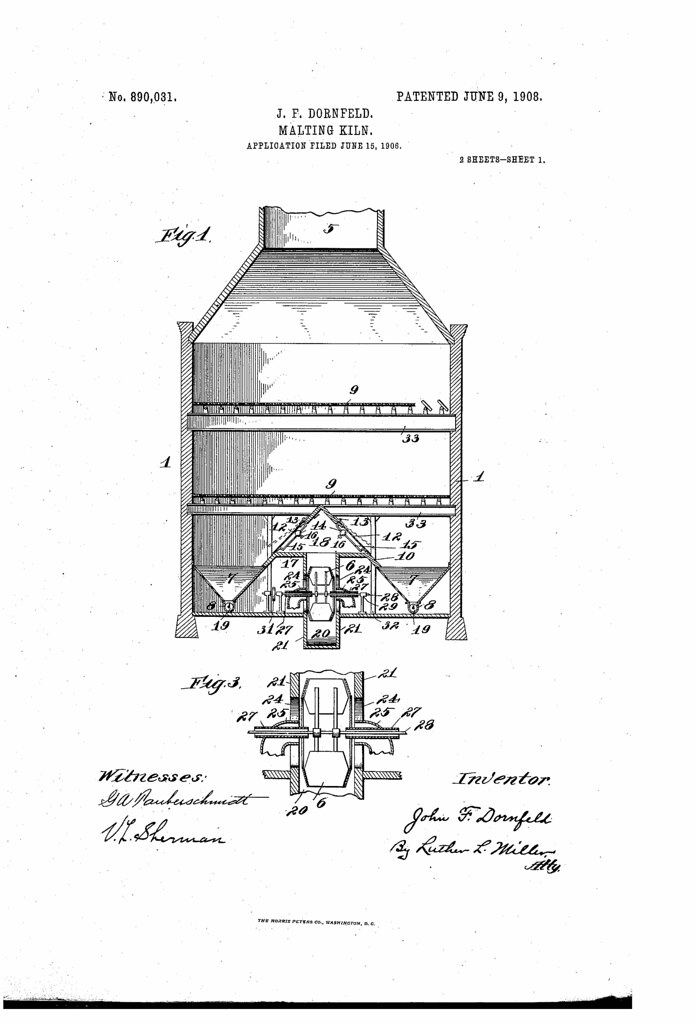 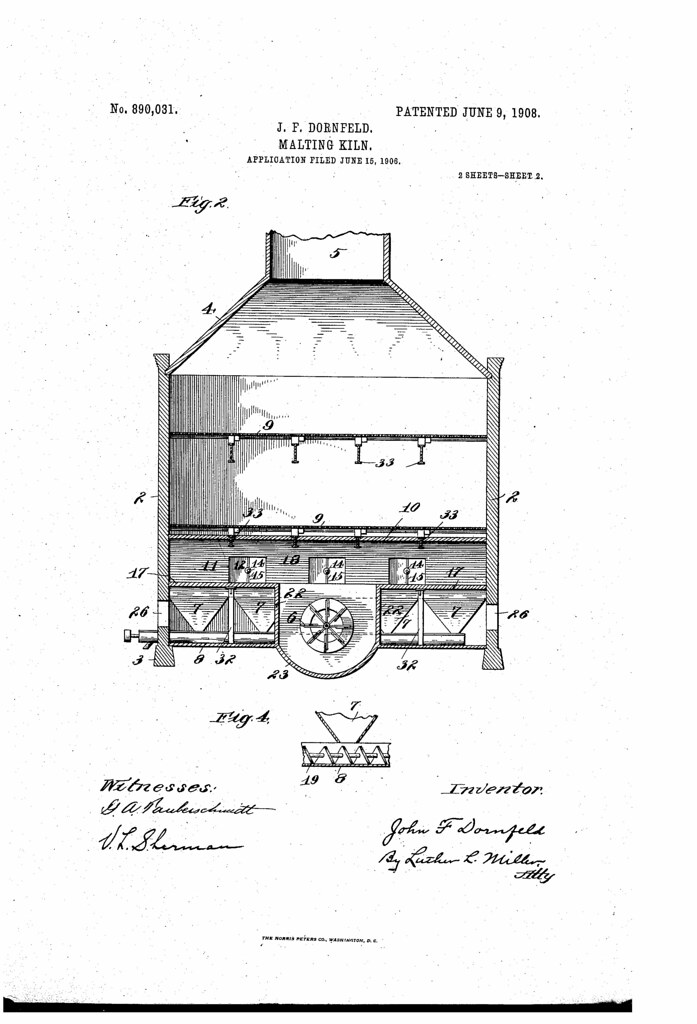 Today in 2012, US Patent WO 2011150933 A3 was issued, an invention of Lene Mølskov BECH, Søren Knudsen, Ole Olsen, Preben Riis, and Birgitte Skadhauge, assigned to Carlsberg Breweries A/S and Heineken Supply Chain B.V., for their “Energy Saving Brewing Method.” Here’s the Abstract:

Barley based beverages are produced in large quantities, employing highly energy consuming methods, for example in the malting and brewhouse facilities for kiln drying and wort boiling operations, respectively. The present invention relates to energy saving methods for preparing barley based beverages, as well as to barley plants useful in such methods. In particular, the invention describes barley plants with combined traits of null-lipoxygenase-1 (null-LOX-1), null-lipoxygenase-2 (null-LOX-2) and null-S-adenosylmethionine:methionine S-methyltransferase in one plant, which is particularly useful for energy saving methods to prepare barley based beverages, such as beer. 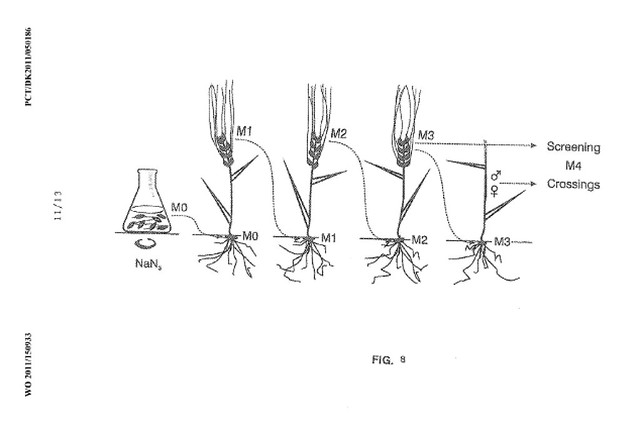 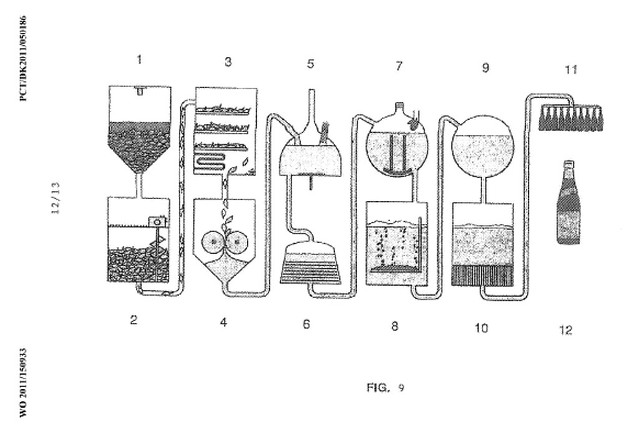 Today in 1987, US Patent 4670274 A was issued, an invention of Piroska Ress, Istvan Kiss, Geza Miltenyi, Antal Strahl, Imre Petro, Jozsef Farkas, Peter Biacs, Istvanne Kozma, and Istvan Debreczeny, assigned to Kobanyai Sorgyar, for their “Process For Controlling the Germination of Malting Barley.” Here’s the Abstract:

Today in 1919, US Patent 1299379 A was issued, an invention of Robert J. Owens, for his “Wild-Oat and Barley Separator.” There’s no Abstract, although in the description it includes this summary:

The object of my invention is to provide a separator which will dispense entirely with fans and air currents and wire sieves and of such devices as flannels, carpets and the like, frequently found in machines of this type for separating and grading grains.

A further object is to provide a machine by means of which not only wild oats but small, imperfect kernels of grain can be separated from the full, plump kernels that are suitable for seed. 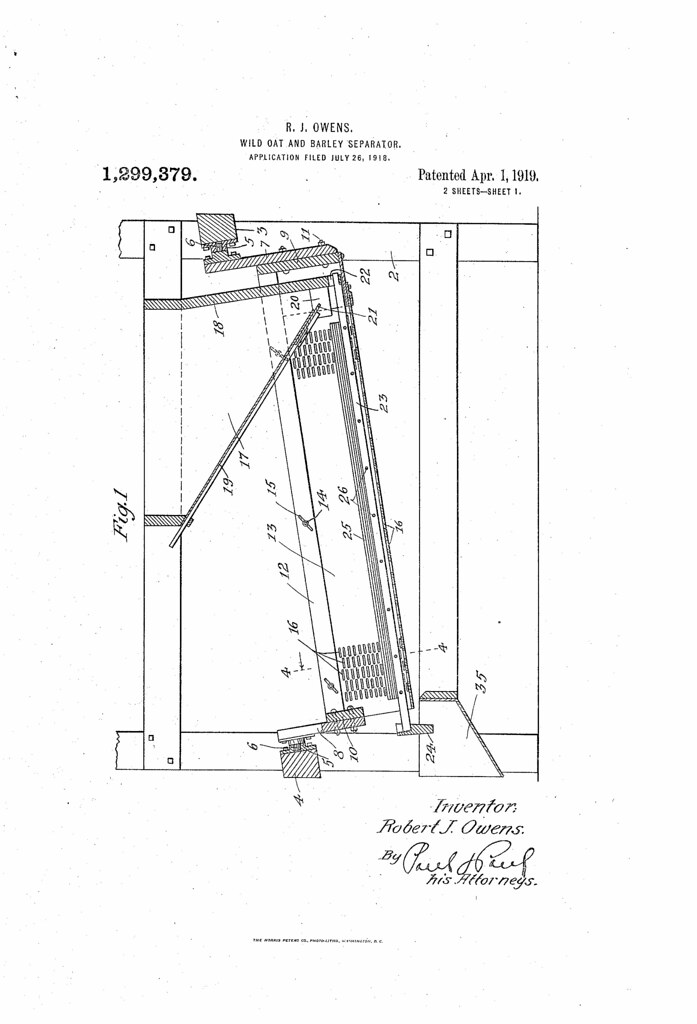 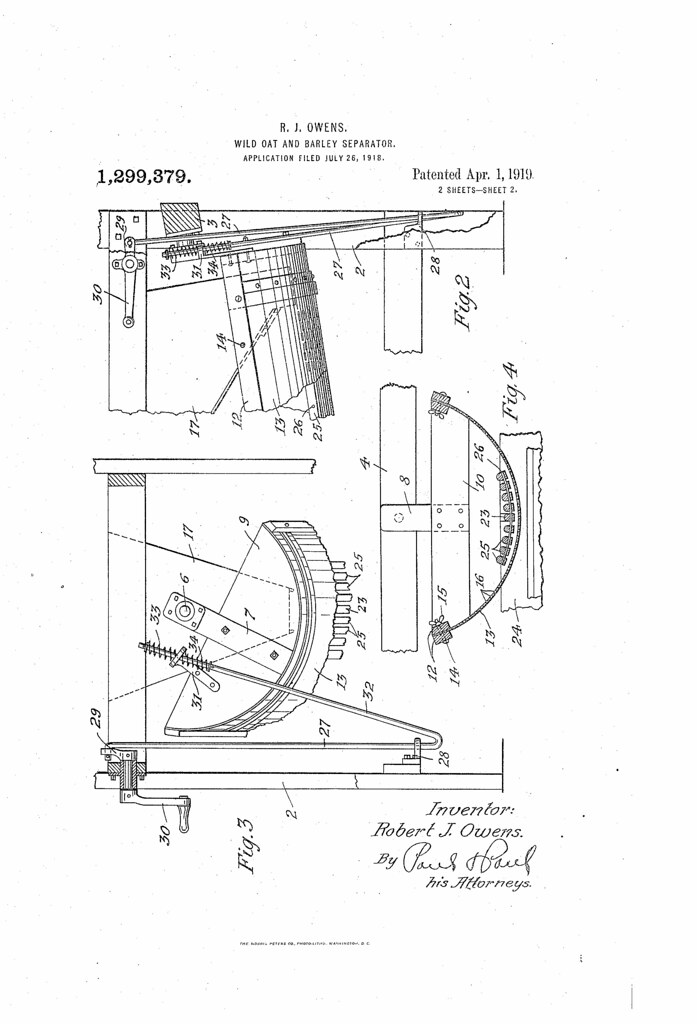 Today in 1916, US Patent 1170839 A was issued, an invention of John J. Molloy, for his “Barley or Rice Huller.” There’s no Abstract, although in the description it includes this summary:

This invention relates to grain hullers and particularly to barley and rice pearlers. It is an object of this invention to provide a simple, practical, automatic-feed continuously operating hulling machine of high efficiency in capacity and cleanness of product particularly designed for handling rice. A further object is to provide a huller in which the quantity of the discharge may be readily and accurately controlled and whereby the degree of pressure of the grain in transit is regulated and maintained uniform. 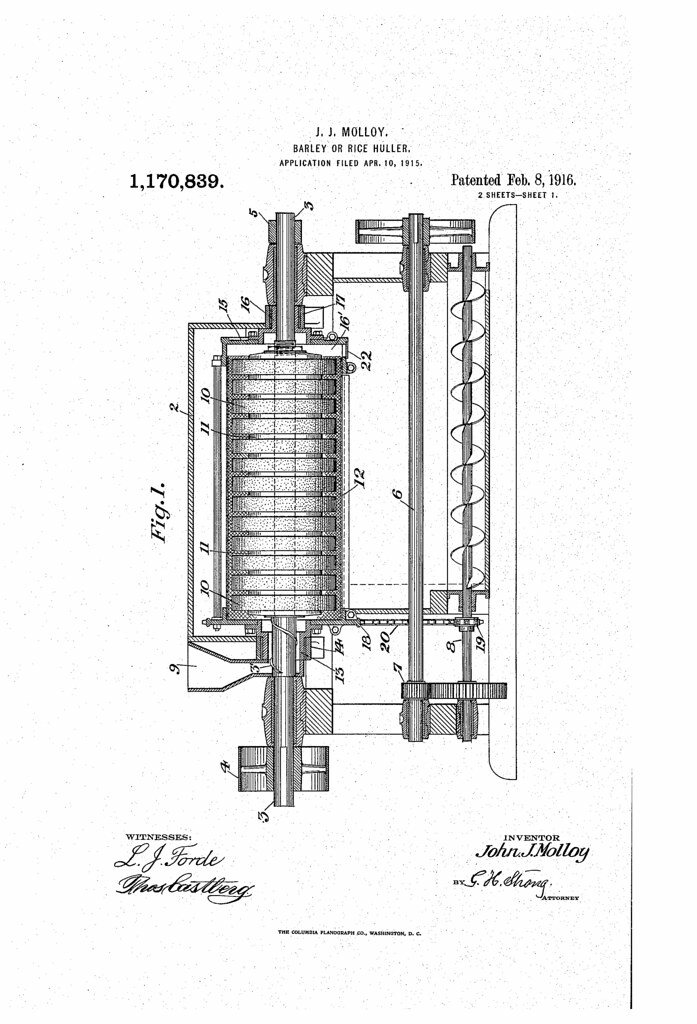 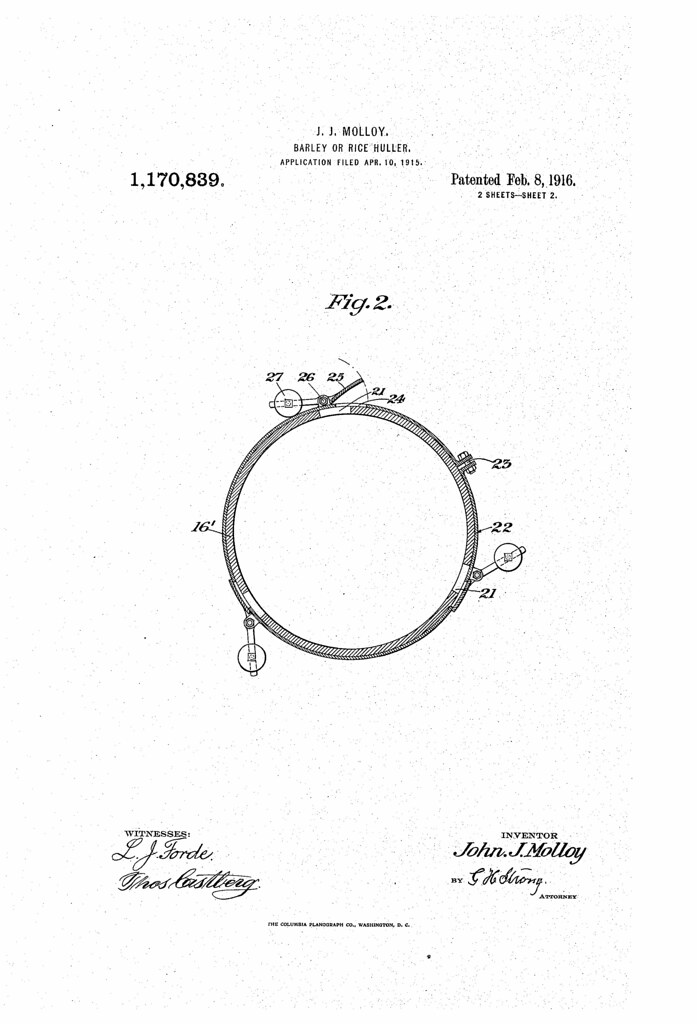 Today in 1894, US Patent 513694 A was issued, an invention of James White, for his “Apparatus For Drying Barley, Malt, Etc.” There’s no Abstract, although in the description it includes this summary:

My invention has reference to apparatus for drying barley, malt, oats, wheat or other substances of a granular or pulverulent nature.

The invention mainly consists in the construction within a kiln or drying house of an inclined or vertical channel formed with foraminous sides and divided transversely at suitable intervals into chambers the bottoms of which contain cross passages, which passages When the barley or other material which is supplied to the upper end of said channel is allowed to run or flow from one chamber to that next below, transfer the material that was at and near the respective sides of the upper of the two chambers to the opposite sides of the lower chamber, whereby the material gets well mixed and turned over and is consequently more uniformly dried than if it were merely allowed to slide bodily from chamber to chamber.

The invention further consists in the combination with the said cross passages at bottom of each compartment of a central tongue or board projecting up from between said cross passages, and of a central tongue or board projecting down from between said cross passages, the said tongues serving as guides or dividers for the material as it respectively enters and leaves said passages. The lowest chamber does not require cross passages at bottom but has a slide or shutter at top and another slide or shutter at bottom.- When the apparatus is inoperative the bottom slide is normally kept closed and the upper one open, and the two slides are worked at intervals to allow the material in the several chambers to move down one stage, that is to say to the extent of one chamber. To effect this the upper slide is first closed and the bottom slide is then opened to allow the lowest chamber to empty itself into a chute or receptacle. The bottom slide is then closed and the top slide opened, when every chamber (except the lowest) will empty itself through the cross passages into the chamber next below and become filled from the chamber next above, the top chamber receiving its supply from a hopper or otherwise. 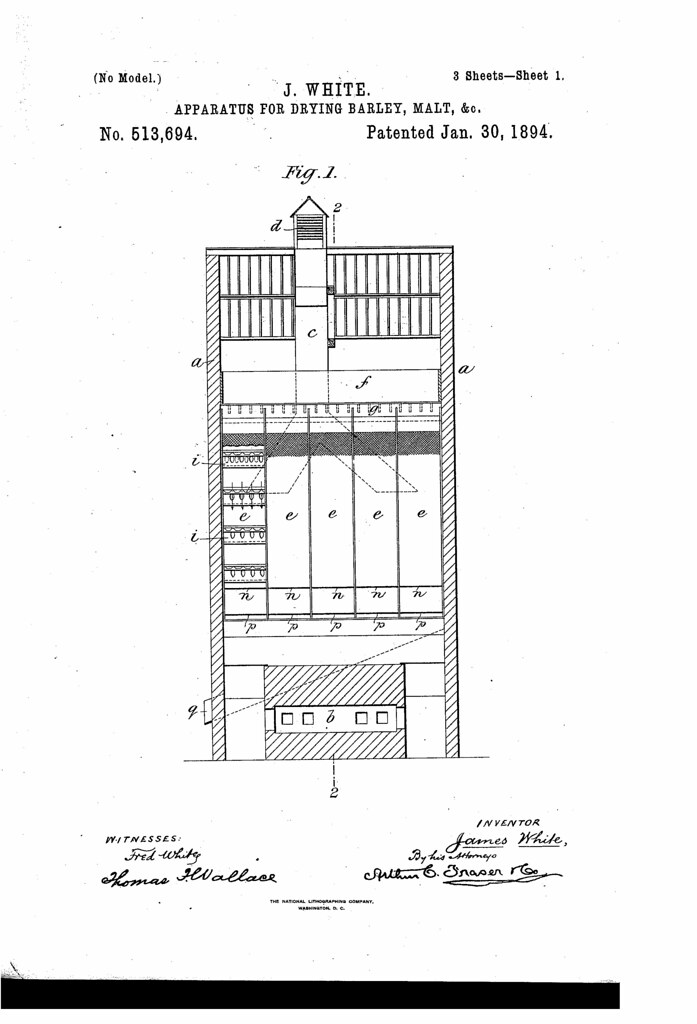 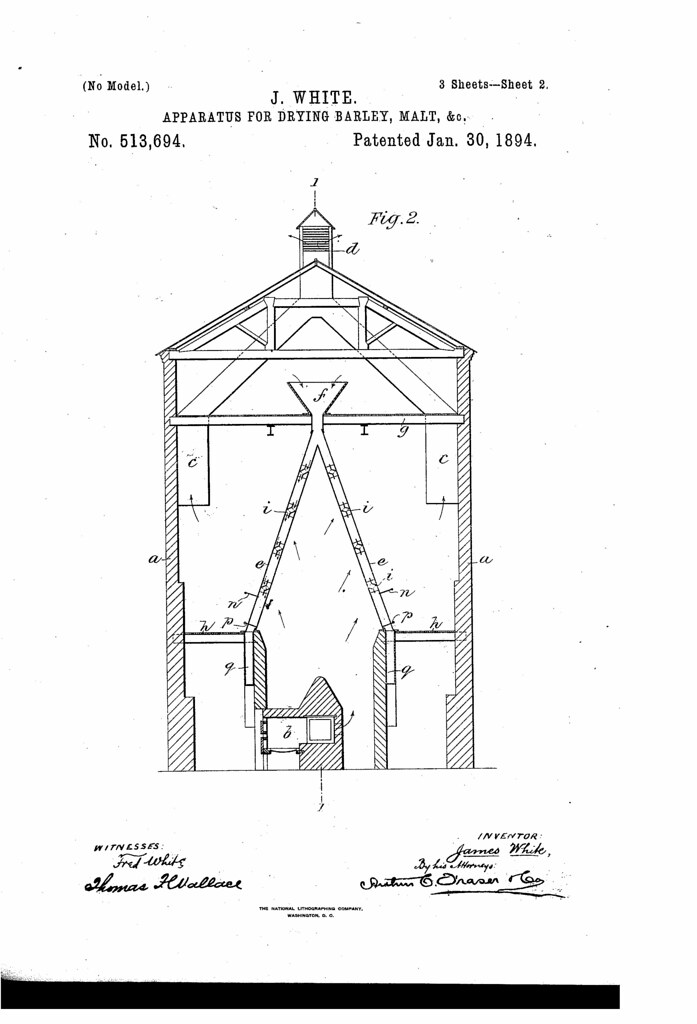 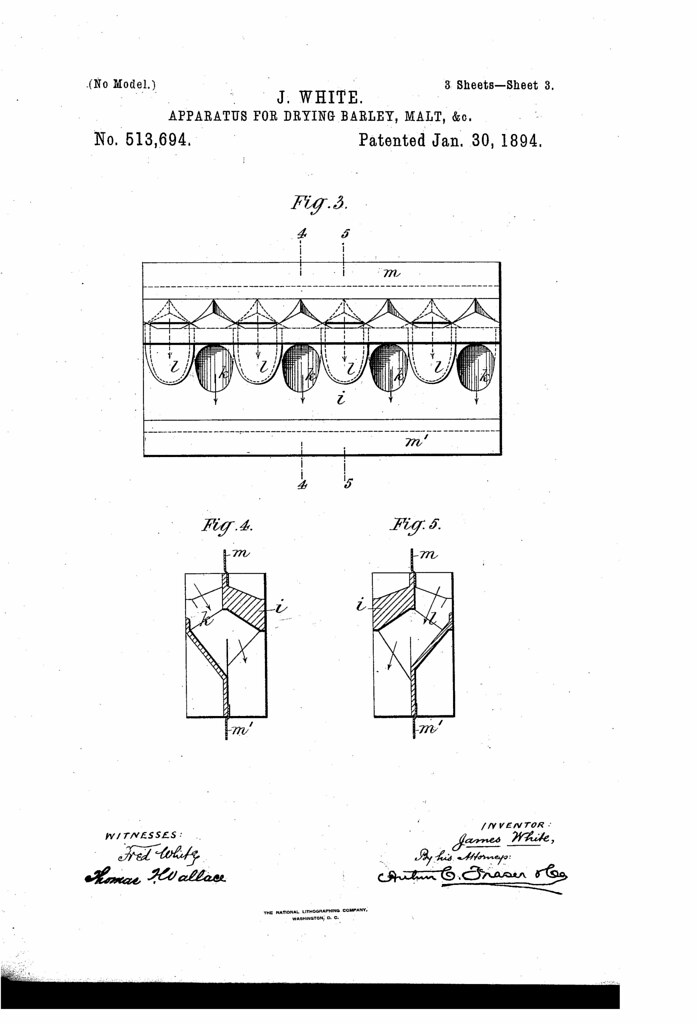 Today in 1999, US Patent 2295931 A1 was issued, an invention of Makoto Kihara, Takafumi Kaneko, Kensuke Fukuda, and Kazutoshi Ito, assigned to Sapporo Breweries Ltd., for their “A Method For Identifying a Barley Variety and a Barley Having a Brewing Property.” Here’s the Abstract: 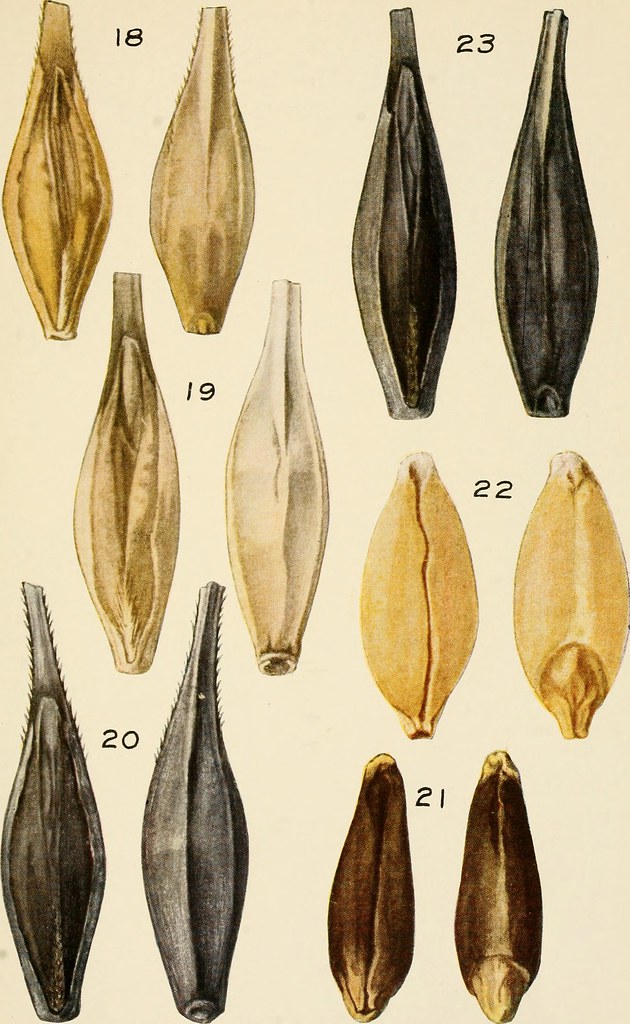 Today in 2010, US Patent EP 2258828 A2 was issued, another invention of Denis Julien, assigned to Malteurop Groupe, for his “Improved Grain Kilning Device.” Here’s the Abstract: 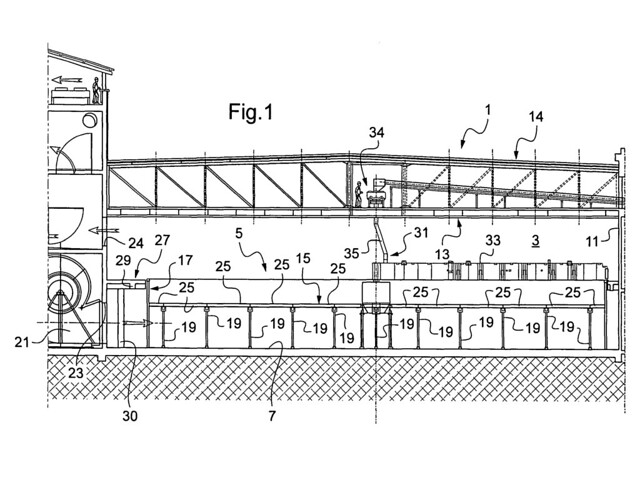 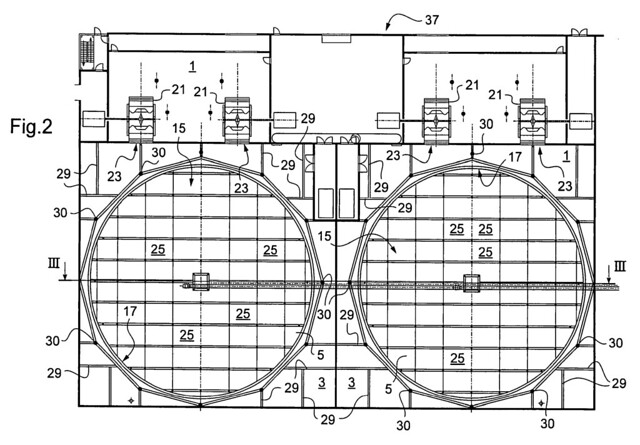