Since 1940, the tiny Principality of Liechtenstein has been holding a celebration which they call Staatsfeiertag Liechtenstein, or their “National Day,” though it’s sometimes referred to as “State Day Liechtenstein.” At around 62 square miles, Liechtenstein is the fourth-smallest in Europe, and has an estimated population of only 37,000. That’s a little been less than nearby Martinez, California.

On 15 August Vaduz plays host to a huge celebration attended by thousands of Liechtenstein citizens and guests from many countries. The National Day begins with the State Act held on the lawn in front of Vaduz Castle, including speeches by the Prince and the president of the parliament. The people are then invited to a reception with drinks in the gardens of the castle. National Day is the only day of the year when the gardens are open to the general public. The Princely Family is also present at this reception and enjoys chatting with those present.

In the afternoon there is a large fair in the centre of Vaduz that continues until the early hours of the morning. The festivities come to a close in the evening with a large firework display above Vaduz Castle that is famous throughout the region and draws many guests to Vaduz.

There were two main reasons for establishing the National Day on 15 August. The first reason was that it was already a bank holiday (Feast of the Assumption). The second reason was that the Reigning Prince at the time, Prince Franz Josef II, celebrated his birthday on 16 August. Therefore, it was decided to celebrate the National Day on 15 August as a combination of the Feast of the Assumption and the Reigning Prince’s birthday. Following the death of Prince Franz Josef II in 1989, National Day continued to be celebrated on 15 August. It was established as the official national day by a law passed in 1990.

Over the course of the years there have been different variations of the official celebration held on National Day. Since 1990 the State Act has taken place on the lawn in front of Vaduz Castle, the location where in 1939 the people paid homage to Prince Franz Josef II under the threat of National Socialism. It was here that Prince Hans-Adam II also received an homage from the people in 1990. 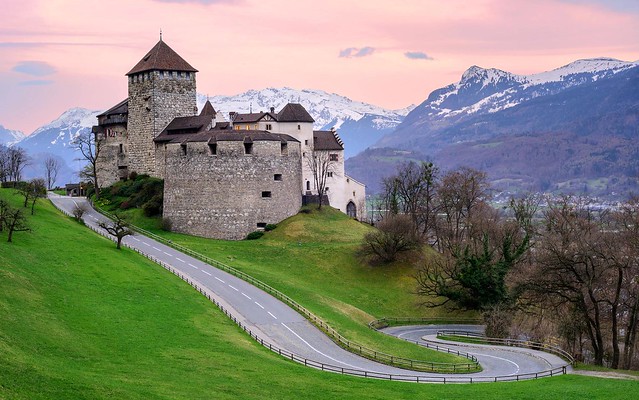 The day starts at the prince’s residence, Vaduz Castle.

But by all accounts, there’s a lot of beer throughout the day, all the way through the fireworks displays that caps off the day’s events. The fair that begins in the afternoon is equal parts street fair and beer festival. 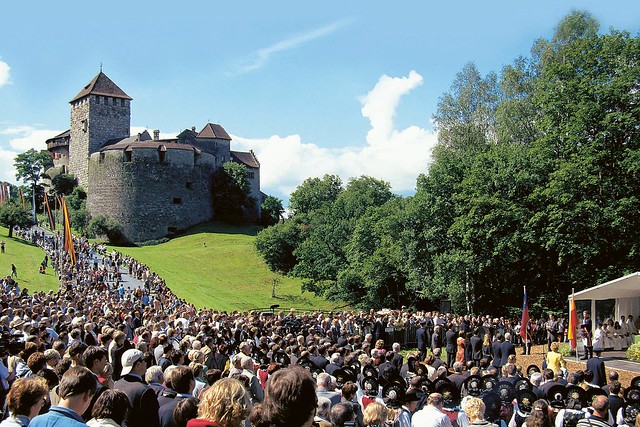 It sounds like a lot of fun, I’d certainly love to go someday. Here’s an account of the day from the perspective of an expat Englishman living there in 2009:

Missed out on an invitation to a Buckingham Palace garden party this year? Never mind. In Liechtenstein you can invite yourself to the annual garden party at the princely Castle in Vaduz and mix with royalty, diplomats and hoi polloi as well as one or two curious foreigners.

You might not get daintily cut sandwiches or tea but there is plenty of beer on tap, fruit juice in packs and filled bread rolls. There’s probably more pushing and shoving, too, as the garden is only small yet the whole population of 35,356 is invited.

This year’s Liechtenstein’s National Day celebrations started as usual by the castle gates at 9.30 on the dot on the 15 August, the date chosen in 1940, coinciding with the Feast of the Assumption, already a public holiday in this Catholic state of only 160 sq kms, and close enough to the birthday (the following day) of the then Ruling Prince, Franz Josef II.

A local band in blue uniform (there are no armed forces in Liechtenstein) struck up and proceeded to the Castle Meadow a few metres away. Various members of the ruling family followed: reigning Prince Hans Adam ll, who is 64, and his wife, Princess Marie von und zu Liechtenstein, along with their eldest son, Hereditary Prince Alois, 41, the prince regent since 2004, and his wife Princess Sophie.

A delegation of diplomats and honorary guests also joined the procession, having been whisked up the steep mountainside in coaches, unlike the puffing locals. And finally, at the rear, the rotund, fully robed Bishop of Vaduz with ornamental crozier and the representative of the Apostolic Nuncio.

The ceremony began with a Catholic Mass and Holy Communion. While the brass band and the Catholic hierarchy enjoyed the shelter of marquees, the poor princely family had to sit on hard benches with no protection from the fierce sun on one of the hottest days of the year. It was too hot for some.

First, one of the young princes felt ill and had to be escorted, in his smart new blue blazer and beige trousers, back to the castle by a lady in elaborate local costume. Then his sister felt faint and was taken by her mother to a waiting ambulance. Liechtenstein’s boy scouts sheltered the bishop and his attendants with white umbrellas as they ventured into the sun to give communion. Once this was over, the reigning princess summoned the scouts to shelter her and the ladies in her entourage. She even sipped from a plastic bottle of mineral water – now the Queen would never do that!

The hereditary prince spoke, inevitably, of the world economic crisis but added that, compared with many countries, Liechtenstein was in an enviable position. His uncle, Prince Nikolaus, the brother of the reigning prince and ambassador to the European Union, looked on in the heat. It was he who had led the difficult negotiations with the United Kingdom only days before, culminating in an agreement to ensure greater exchange of information on tax matters. It was with great relief for its bankers that Liechtenstein was removed from the OECD’s “grey list” of uncooperative states earlier this year.

The head of the 25-seat parliament, Arthur Brunhart, also spoke, reminding everyone that crises were also times of opportunity. By this time, two hours into the ceremony, some were already cheekily making their way to the garden for the party. The band struck up the Liechtenstein national anthem to the same tune as God Save the Queen as loyal citizens raised their right hands, pledging loyalty to the principality. For another year the ceremonial part of the celebrations was over but festivities continued in a beer festival atmosphere in the main street, rounded off by a spectacular fireworks display with free buses to take everyone home afterwards. 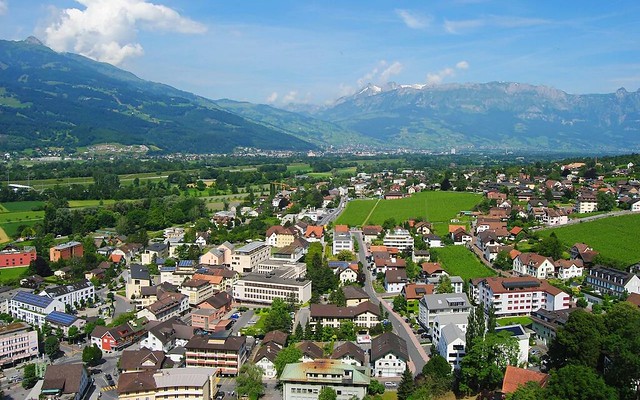 And this is from last year’s celebration, entitled Attending National Day in Liechtenstein: Quite An Experience!