Our 35th Session is hosted by Christina Perozzi & Hallie Beaune, authors of the recently published beer book, The Naked Pint. For now the announcement is currently up on Beer For Chicks, but soon enough, the Session will be on The Beer Chicks, a new website by Perozzi & Beaune. But back to their Session topic — “New Beer’s Resolutions” — which they describe thusly:

So we want to know what was your best and worst of beer for 2009? What beer mistakes did you make? What beer resolutions do you have for 2010? What are your beer regrets and embarrassing moments? What are you hoping to change about your beer experience in 2010?

Best and worst beers of last year? I certainly had plenty of great beer throughout 2009. The new Utopias? Life & Limb? Pliny the Younger? Black Tuesday? Dark Lord? Tasting directly from the barrels at Russian River? I don’t think I could pick just one favorite. A worst beer? I tend to forget the bad as soon as it’s gone. I’d rather focus on the great beer. Beer mistakes? Undoubtedly, at least I hope so. As Joyce said, “a man’s errors are his portals of discovery.” Beer regrets? I’ve had a few. But then again, too few to mention. Embarrassing moments? For a second year in a row, I didn’t make it all the way through the Keene tasting at Brouwers, the day after the Hard Liver Barleywine Festival.

“What are you hoping to change about your beer experience in 2010?” Okay, that’s a question I can sink my teeth into. This is probably going to sound odd, but I think I’d like to drink more beer in 2010. As it is, I drink almost every day. But usually it’s at home, afternoons and usually later in the evening with dinner. With a second grader and a kindergartner that need to get picked up every day and shepherded around to music lessons, etc., it’s not exactly easy to be out drinking every night. But in a sense that’s where the magic happens. Setting is important. 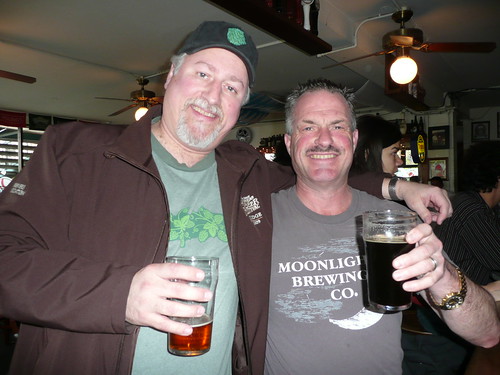 So that’s my hope. To share a beer with more people this year, get out of the house more. Spend more time in bars, restaurants and breweries. That’s one of my New Beer’s Resolution, to drink more beer. Join me? 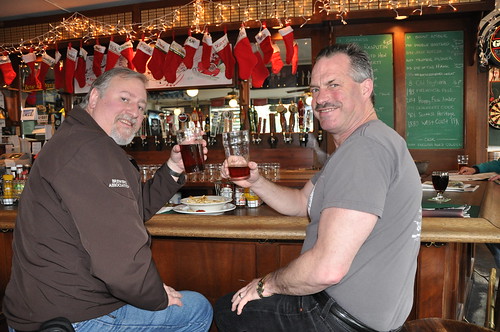 Drinking my first beer on New Year’s Day at Barclay’s in Oakland with Bruce Paton, the Beer Chef. My first beer this year was Moonlight Toast, which I followed with Moonlight’s Christmas beer: Santa’s Tipple.

You can also see some more photos in this slideshow from today’s quick trip to Barclay’s.

Before Christmas, I attended the 21st annual holiday tasting at Pacific Coast Brewing in Oakland. It was my first time at the long-running event and I had a terrific time. Owner Steve Wolfe and brewmaster Don Gortemiller were gracious hosts and I spent the afternoon with several friends and colleagues. I also didn’t realize just how much food would be served — which I should add was a welcome development — with the fifteen beers. Having done this for decades, they have the process down. Every fifteen minutes a new beer was poured and in between a new dish was made available for noshing. 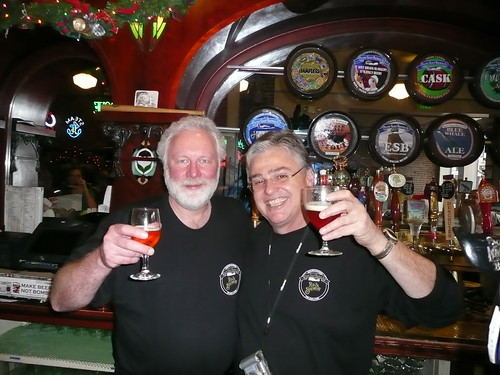 Don and Steve chose all the beers with an eye toward serving the most special beers they could get their hands on, and ones which were appropriate for the holiday season. Nine of the fifteen were holiday seasonals, and three were anniversary ales. 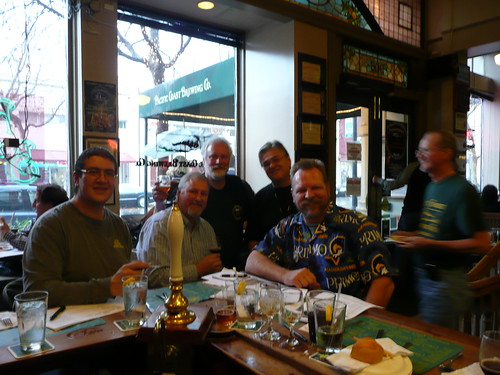 Mario Rubio, from Brewed For Thought, me, Steve Wolfe, Don Gortemiller and Mike Pitsker, from the Celebrator Beer News.

Every attendee was provided with an elaborate scoring sheet along with some guidelines on how to score each beer. Most people in the brewpub seemed to take scoring the beers very seriously. At the end of the tasting, the completed sheets are collected and tabulated. Brewmaster Don Gortemiller released the results of the 2009 tasting a few days before Christmas. This year’s winner was the Double Jack from Firestone Walker Brewing in Paso Robles, California. Deschutes Black Butte XXI came in second and third place went to the collaboration between Dogfish Head Brewery and Sierra Nevada Brewing, Life & Limb. To see the full tally, check out the results on Pacific Coast’s website. 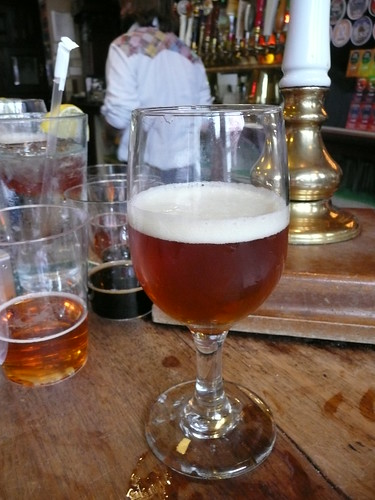 Below is a slideshow of the Pacific Coast Holiday Tasting. This Flickr gallery is best viewed in full screen. To view it that way, after clicking on the arrow in the center to start the slideshow, click on the button on the bottom right with the four arrows pointing outward on it, to see the photos in glorious full screen. Once in full screen slideshow mode, click on “Show Info” to identify each photo.

The Brewing Network has just announced their first beer festival next month. It’s going to be a Winter Brews Festival and will take place January 30, 2010 from 1:00 to 8:00 p.m. The event will be held at the Linden Street Brewery in Oakland.

While Bay Area residents commiserate in a collective shiver at current winter temperatures, the East Bay based craft beer radio company, the Brewing Network, is finalizing plans for its first annual Winter Brews Festival to revive listeners, locals, and brewers from their wintery slumber to enjoy seasonal brews from more than 30 world class breweries.

The Brewing Network Winter Brews Festival will be held at the newly opened Linden St. Brewery in Oakland on Saturday, January 30, 2010, and will feature a wide variety of winter warmers and unique innovations from some of the best brewers in the Bay Area and beyond.

Partnering with Linden St. Brewery in Oakland, this festival combines the love of seasonal beers with the enthusiasm of the local craft beer scene. With barrels from breweries such as Russian River, Firestone Walker, the 21st Amendment, Speakeasy, Linden St., Moonlight Brewing, Magnolia, and many more, this Winter Brews Fest promises to provide big, malty beers to ignite the taste buds of beer lovers, new and experienced.

Hot food (will be available for purchase) and live music will round out the festival, which will run from 1pm to 8pm. For more information on the event, please visit www.brewingnetwork.com/ontap.

Tickets will most likely be $25, which will include a commemorative glass and five tastings, with more available for purchase. Details are still being worked out and the price is subject to change. 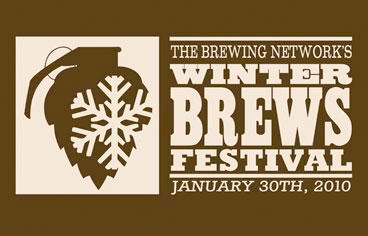