You are here: Home / Beers / Time For An Utepils

The trivia website Dose recently had a list they posted of 21 Words That Don’t Exist In English, But Should. Essentially they’re words in other languages for which there’s no English equivalent, which Dose argues should be added to our dictionaries. Given our history of liberal “borrowing” of foreign words, I can’t see why not. The one word that caught my attention was Utepils (pronounced “oot-er-pillss”), a noun meaning “to sit outside on a sunny day enjoying a beer.”

According to the book “The untranslatables’,” by C. J. Moore, “you have to live through the long dark months of a Norwegian winter to appreciate the annual Norwegian rite of utepils. Literally it means ‘the first drink of the year taken out of doors.’ Easter is barely past, with its tradition of hyttepåske — your Easter visit to your remote cabin — and the days are at last getting longer. Although it’s still practically freezing, everyone is queueing up to invite you to a first utepils get-together ar their favourite bar.

Actually, utepils simply means any beer enjoyed outside, at any time of the year, but it is true that the first one of the season is a much anticipated ritual. You know spring is on its way when norwegians brave the chilling temperatures and gather around their pints, sometimes even wrapped in blankets. The practice continues throughout the year though – nothing says summer like utepils.

The word itself is made up of two words, ute (‘outside’) and pils, which is simply short for Pilsner, the type of lager beer most commonly consumed in Norway. Interestingly, pils is also used as a slang verb (‘å pilse’), meaning simply ‘to drink beer’. So when you are getting together for an utepils you are pilsing.

Anyway, as our weather in Northern California has been decidedly warm the last few days, I think it’s time I sat out on our back deck, basking in the sunshine with a beer in hand, and enjoyed me a good old-fashioned Utepils. Who’s with me? 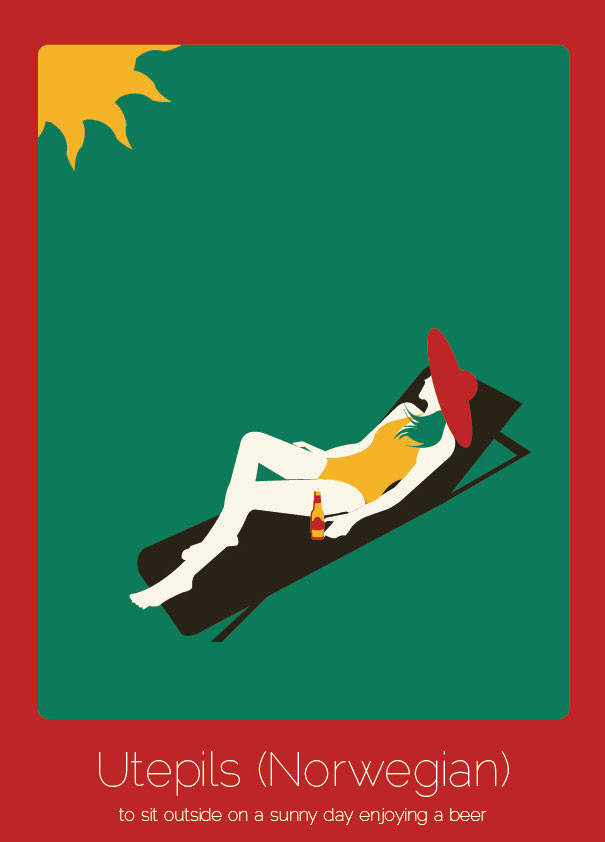