You are here: Home / Beers / 10-Cent Beer Night In Cleveland

On June 4, 1974, the Cleveland Indians hosted the Texas Rangers with a promotion entitled “10¢ Beer Night” in an effort to boost sagging attendance to Municipal Stadium. 25,134 fans showed up, about twice the number expected. They were allowed to purchase six 10¢ beers (12 oz. cups of 3.2 beer or 4% ABV) at a time, but there was no limit on how many trips to the concession stand one could make. To give that some context, regular beer prices at the time were 65¢, so a dime beer was about 6-and-half times cheaper, a pretty good bargain. Accounts vary on the brand of beer. Some say Stroh’s while other say it was Genesee. By the time the game ended in chaos, around 60,000 beers had been consumed. 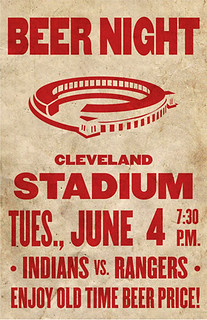 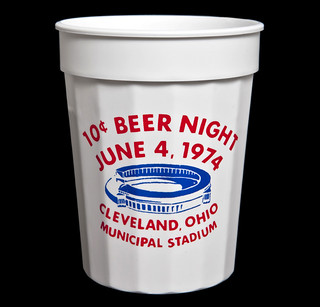 To add fuel to the fire, a little over a week before in Texas, the Rangers had a similar promotion in which there was “a bench-clearing brawl” when the two teams had played “at Arlington Stadium in Texas [which] left some Indians fans harboring a grudge against the Rangers.”

The Indians had been losing most of the game, but managed to tie it up in the 9th inning, at which point I’ll let Wikipedia take over the story.

After the Indians had managed to tie the game, a 19-year-old fan named Terry Yerkic ran onto the field and attempted to steal Texas outfielder Jeff Burroughs’ cap. Confronting the fan, Burroughs tripped. Thinking that Burroughs had been attacked, Texas manager Billy Martin charged onto the field with his players right behind, some wielding bats. A large number of intoxicated fans – some armed with knives, chains, and portions of stadium seats that they had torn apart – surged onto the field, and others hurled bottles from the stands. Hundreds of fans surrounded the outnumbered Rangers.

Realizing that the Rangers’ lives might be in danger, Cleveland manager Ken Aspromonte ordered his players to grab bats and help the Rangers, attacking the team’s own fans in the process. Rioters began throwing steel folding chairs, and Cleveland relief pitcher Tom Hilgendorf was hit in the head by one of them. Hargrove, after subduing one rioter in a fistfight, had to fight another on his way back to the Texas dugout. The two teams retreated off the field through the dugouts in groups, with players protecting each other.

The bases were pulled up and stolen and many rioters threw a vast array of objects including cups, rocks, bottles, batteries from radios, hot dogs, popcorn containers, and folding chairs. As a result, umpire crew chief Nestor Chylak, realizing that order would not be restored in a timely fashion, forfeited the game to Texas. He too was a victim of the rioters, as one struck and cut his head with part of a stadium seat[11] and his hand was cut by a thrown rock. He later called the fans “uncontrollable beasts” and stated that he’d never seen anything like what had happened, “except in a zoo”.

As Joe Tait and Herb Score called the riot live on radio, Score mentioned the security guards’ inability to handle the crowd. He said, “Aw, this is absolute tragedy.” The Cleveland Police Department finally arrived to restore order.

Later, Cleveland general manager Phil Seghi blamed the umpires for losing control of the game. The Sporting News wrote that “Seghi’s perspective might have been different had he been in Chylak’s shoes, in the midst of knife-wielding, bottle-throwing, chair-tossing, fist-swinging drunks.”

The game ended with the Indian forfeiting because order could not be restored so the game could be completed. 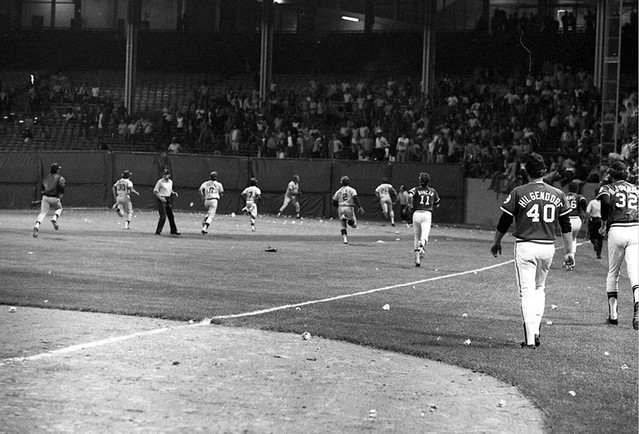 The scene as thinks began to turn ugly in the bottom of the 9th. 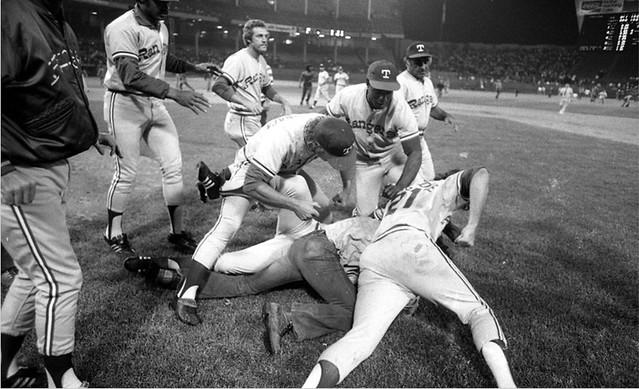 Things went from bad to worse after that. Here’s a run down of the statistics from sportswriter Dan Coughlin, who was there that night and got punched in the face:

You can read all about Dan Coughlin recalls the Indians’ famous Ten-Cent Beer Night and see a gallery of photos at SB★Nation entitled Celebrating 10-Cent Beer Night in photos.

Among the more tame incidents was a woman who flashed the crowd from the on-deck circle, a father-son team mooning the players, and fans jumping on the field to meet the outfielders. Then, in the bottom of the ninth, the Indians tied the game, but never got a chance to win. Fans started throwing batteries, golf balls, cups, and rocks onto the field. The drunk-fest involved more streakers, base stealers (literally), and fans who stormed the field and attacked the opposing team. Cleveland players had to wield bats to come to the aid of the Rangers players. Texas was awarded a forfeit.

And a special thanks to Jason Petros from MoreBeer and The Brewing Network for reminding me it was today.