You are here: Home / Beers / Albert Einstein For Beer

In addition to being Pi Day, it’s also the birthday of physicist Albert Einstein, one of the most famous scientists of all-time. By most accounts, Einstein, despite being German, was not a beer drinker. But he may not have been a teetotaler, either. Einstein mentioned in a letter that at a party with Mileva Marić (who Einstein was married to for a time), he was apparently “very drunk,” which he revealed in a letter to his friend, mathematician Conrad Habicht, about the incident. But it appears that was more uncommon, and that he generally “chose not to drink, believing that alcohol spoiled the mind.” But that has not stopped breweries and others from using his images and fame for beer purposes. Some of these are pretty cool, others just seen shameless, but I’m a big fan of Einstein, at least what I know of his public persona. And I certainly feel the urge to drink a toast to his memory. 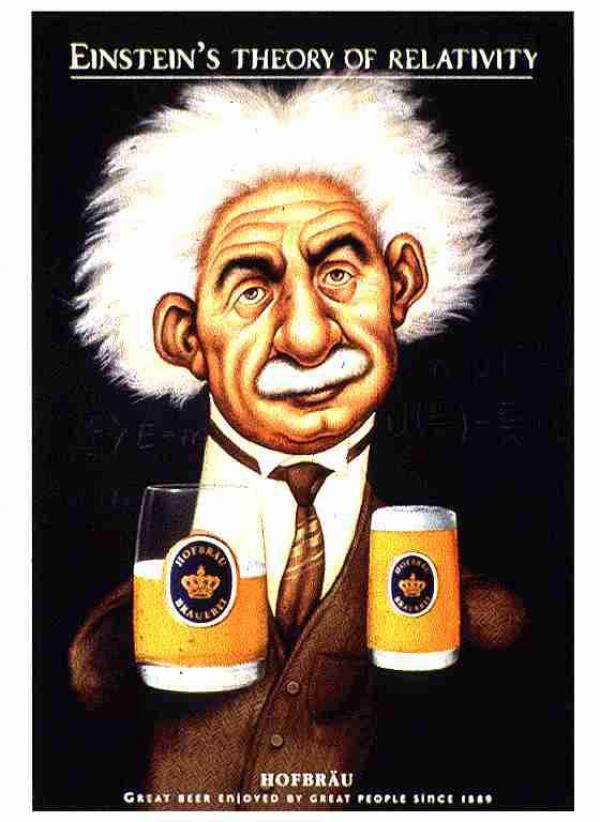 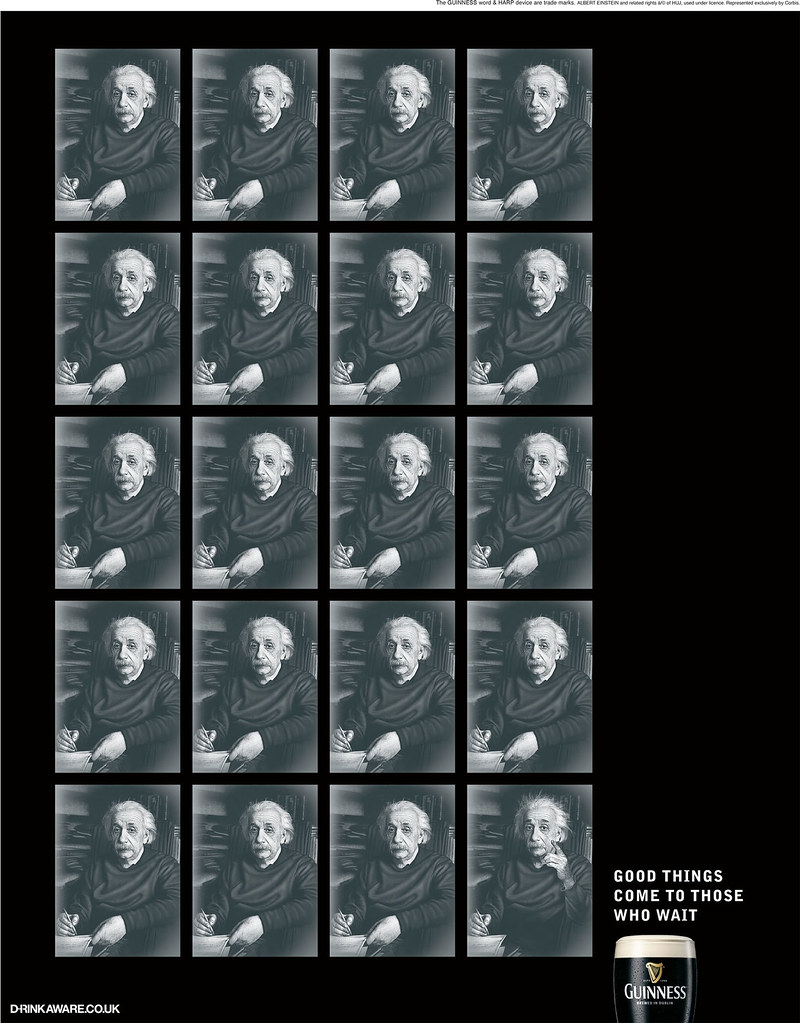 From the Guinness ad campaign series “Good Things Come to Those Who Wait,” which began in the mid-1900s. This ad is from 2007. 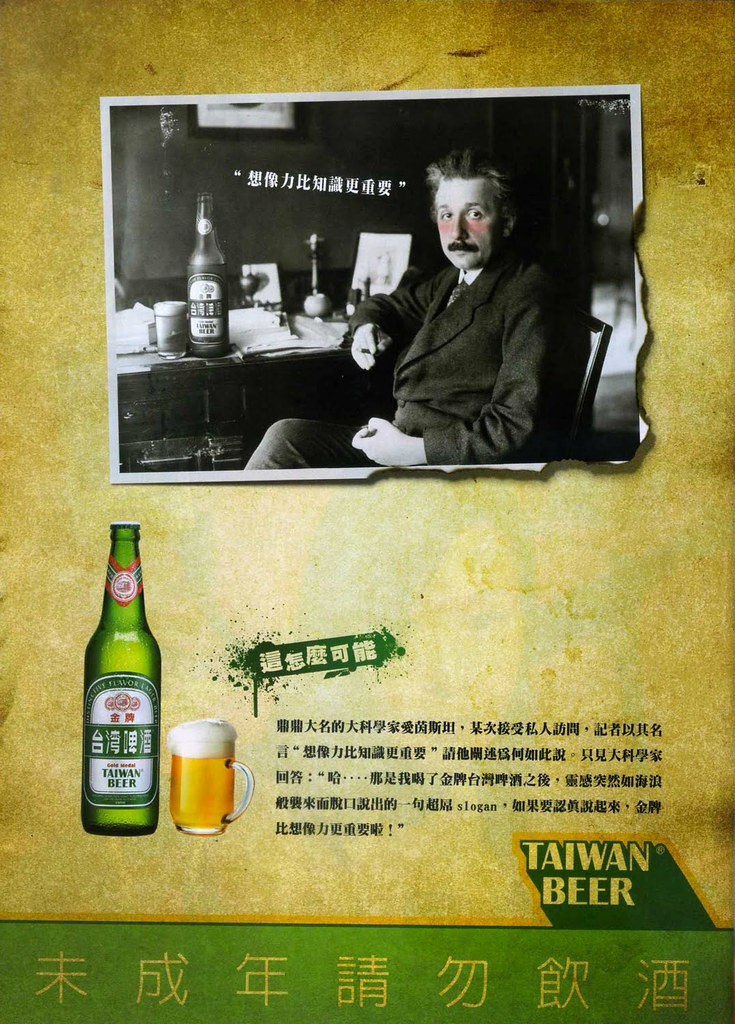 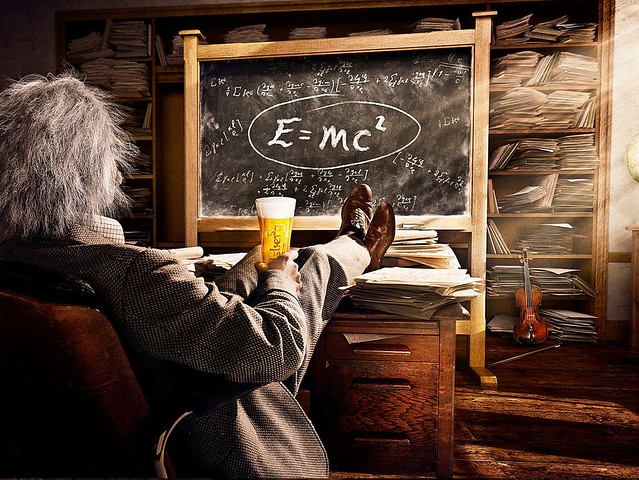 From a Carlsberg Facebook ad that used the tagline “Rewrite the Rules.” The full ad includes a caveman, and looks like this. 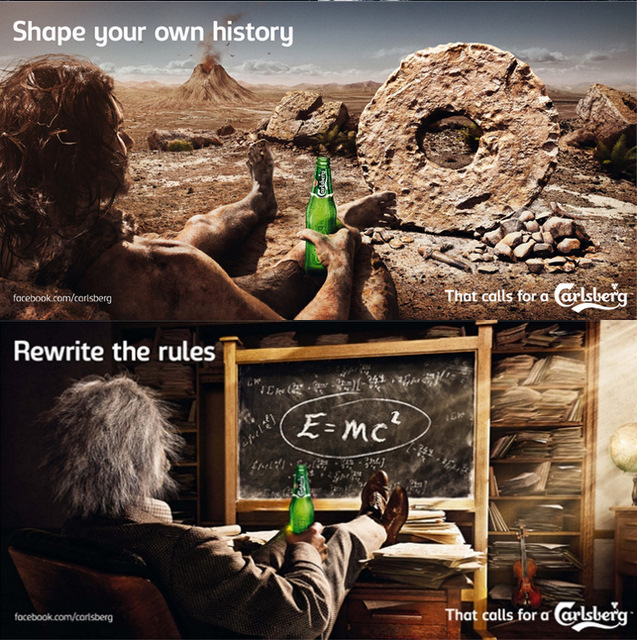 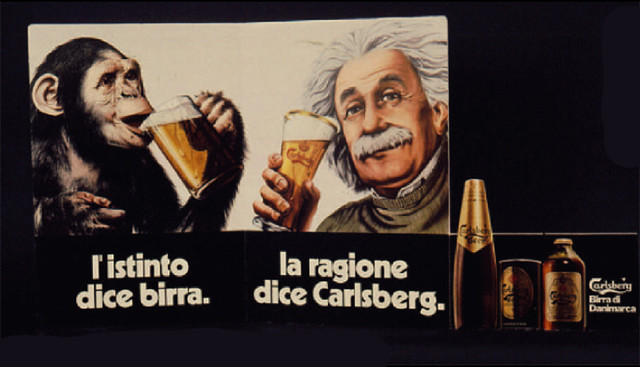 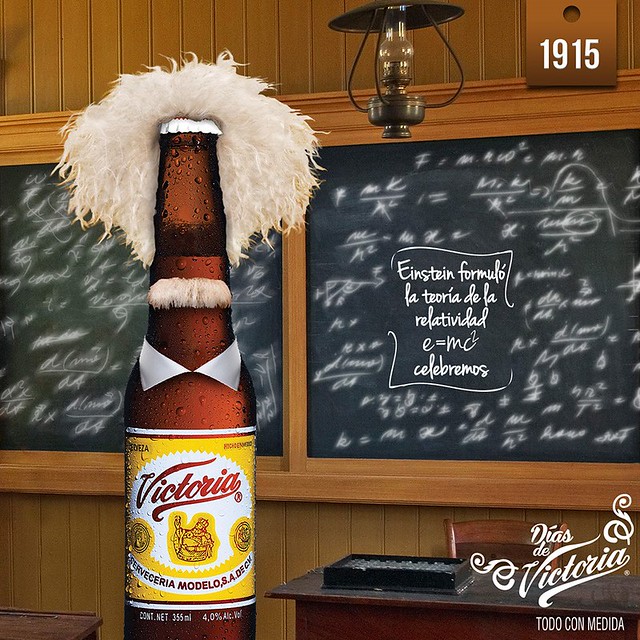 The Mexican lager Victoria dressed up one of their bottles to resemble Einstein for an ad this year. 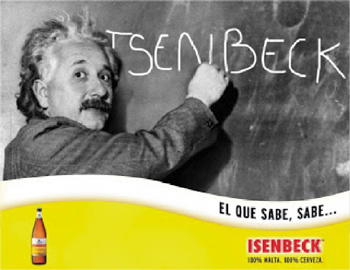 The Argentinian beer Isenbeck used an iconic photo of Einstein, substituting their name for the equation on the chalkboard. 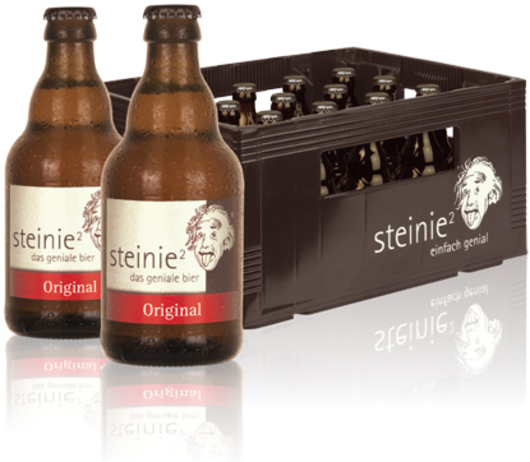 They describe the beer, roughly translated, as having mild hops and malt, with an aging, or fermentation, time of 6-8 weeks. 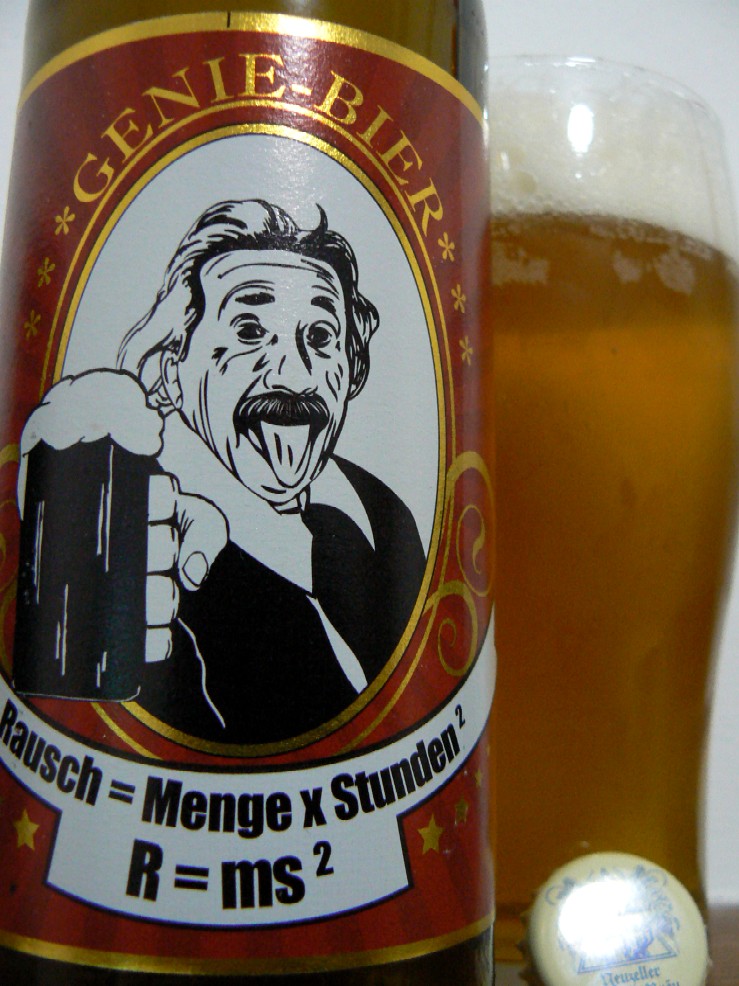 Then there’s “Genie-Bier,” which features a cartoon of Einstein along with equation: Rausch = Menge x Stunden² that Google Translate turns into the English phrase Noise = Volume x Hours² which I confess doesn’t make sense to me, although another website, in Italian, shows the word Rausch as “binge,” which also doesn’t seem to quite fit. Luckily, yet another website suggests that Rausch essentially means the state of bring drunk, which finally makes some sense, because getting drunk would take a certain volume of beer over time. Yay science. 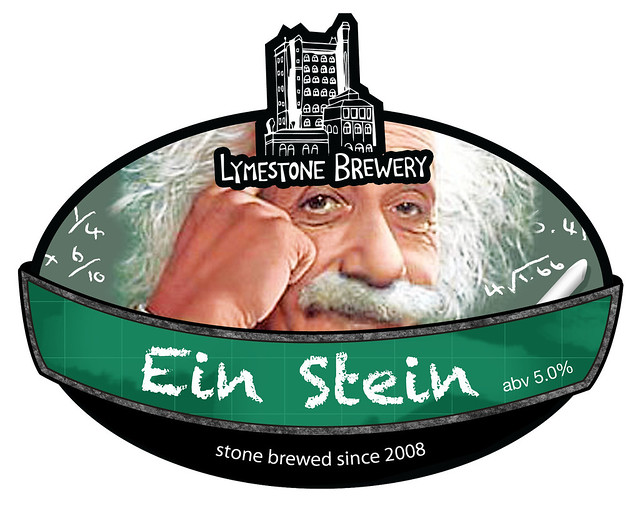 The Lymestone Brewery in Stone,
Staffordshire, England makes a beer they call “Ein Stein,” which they describe thusly:

This lingering combination of pale Maris Otter malts and choice German hops may make you pause for thought. As you contemplate the gentle biscuit malts, fresh Hersbrucker hops seduce the taste buds educating and enlightening the palate.
So why is Mr Einstein on the pump clip? It’s not rocket science… but it is thinking drinking. 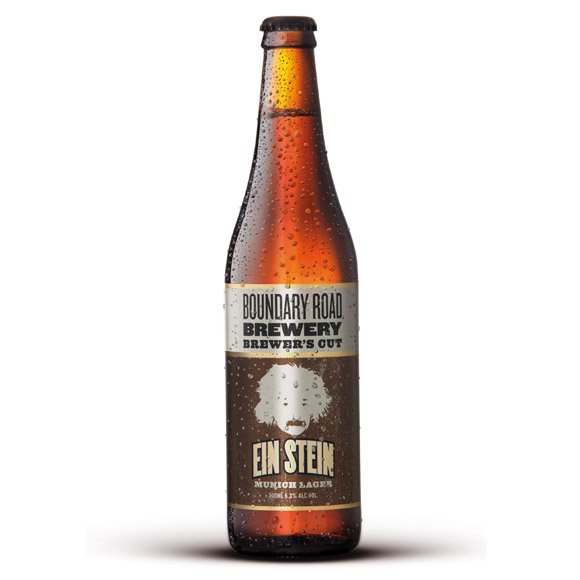 The Boundary Road Brewery in New Zealand also used to brew a beer called “Ein Stein,” a Munich Lager that was part of its “Brewer’s Cut” series, which I presume are seasonals or one-offs since it’s no longer listed on their website.

There are also a couple of beer-themed t-shirts using Albert Einstein and beer together. 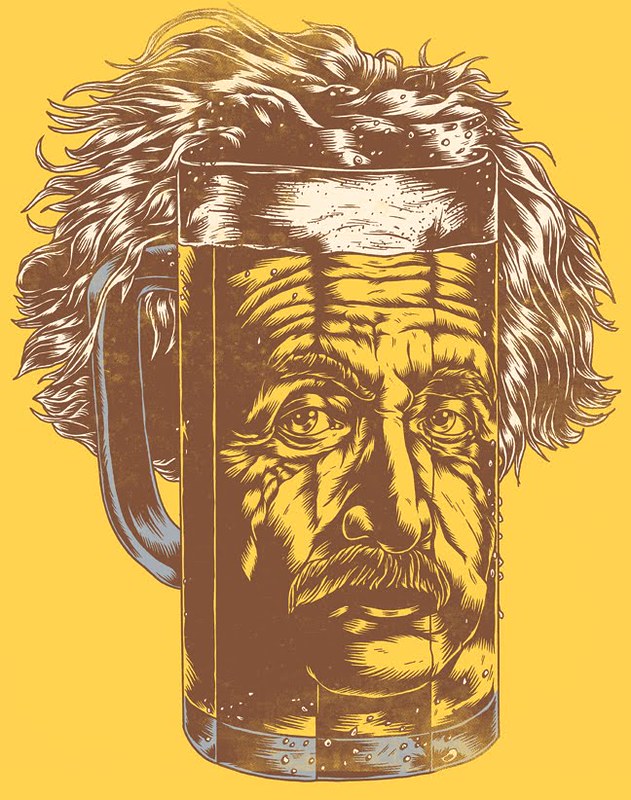 First, there’s another Ein Stein pun, this one designed by illustrator Joshua Kemble and available from Design by Humans. 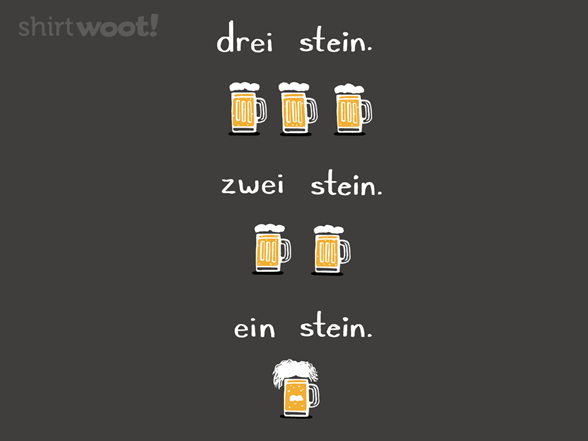 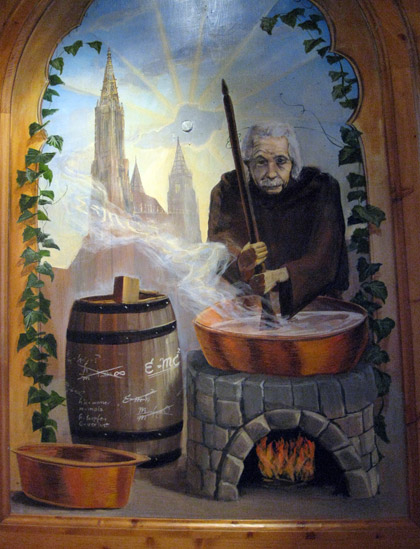 And finally there’s this mural of Albert Einstein brewing that Stan Hieronymus took a photo of when he visited the Barfüsser die Hausbrauerie in Ulm, Germany, which is the town where he was born today in 1879.

By now, I assume you’re thinking, please make it stop. Surely there can’t be any more references to Albert Einstein and beer? Nope, not really. That’s all I’ve turned up, so as your reward for making it this far, I’ll just leave you with a little joke.

A neutron walks into a bar.

“I’d like a beer,” he says. The bartender promptly serves up a beer.

“How much will that be?” asks the neutron.

“For you?” replies the bartender, “no charge.”