You are here: Home / Beers / Ballantine IPA To Return

This is exciting news. Pabst is bringing back the iconic Ballantine IPA, one of the few ales made by a bigger brewery, and one of the only examples of an India Pale Ale before the 1980s. There were, I believe, maybe a dozen or so American IPAs after prohibition, though by the 1960s Ballantine was the last man standing. I’m not sure when they stopped making it initially, sometime during the 1970s I believe, although they did bring it back briefly in 1995, only to discontinue it again. But beginning next month, it will be back again, brewed at Cold Springs Brewing in Minnesota. That’s actually good news, I think, because they’ve been brewing the canned 21st Amendment beers, so they’re already familiar with making hoppy beers. Also, the Pabst brewmaster, Gregory Deuhs, used to brew for Redhook at their Woodinville, Washington brewery. 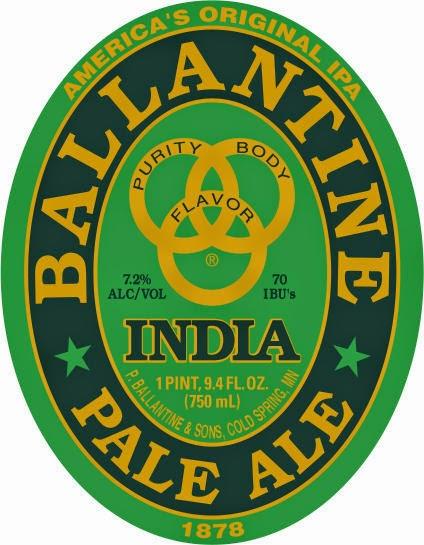 When I first started drinking beer, Ballantine Ale was around, but I never had the IPA, sad to say. I remember talking to Michael Jackson about his memory of how the beer tasted while sharing a cab from an event back to our hotel at GABF one year in the 1990s. He recalled it fondly, though it was probably closer to what today we’d consider an English-style IPA, in his recollection of it, though I believe he thought it was around 45 IBUs. It appears that the new version will be 7.2% a.b.v. and 70 IBUs, which is at the upper end of the BJCP guidelines, making it more like a modern American-style IPA. I may be wrong about this, but I’d be surprised if it was like that in the 1970s, not even Liberty Ale, which was (pun-intended) revolutionary in 1975 when it was released, was that high. Liberty Ale is 5.9% a.b.v. and around 47 IBUs.

Apparently, the new Ballantine version “uses four different malts and eight different hops, as well as hop oil to finish it off. American oak chips are used in the process, harking back to the oak and cypress barrels used for the original beer.” I’m certainly very interested to try it. It seems like a great move, given that IPAs are such a growing category, for Pabst to revive it now when interest in them is at an all-time high.

First brewed in 1878 by P. Ballantine & Sons Brewing Company in Newark, NJ, Ballantine India Pale Ale was the only American-made beer that successfully continued the tradition of the 19th century IPAs once Prohibition ended. This was due in large part to the brewery’s steadfast commitment to ‘Purity, Body, and Flavor” — as exemplified by the three interlocking Borromean rings found on every bottle.

Ballantine’s brewers were meticulous about ensuring that the beer’s gravity, alcohol content, IBUs, and hopping rates remained consistent well into the mid-20th century. Another unique method that characterized Ballantine India Pale Ale was a hopping process in which the distilled oils from a hop-and-water mixture were added to the brew, giving the beer an intense hoppy flavor that was quite distinct from its competition. P. Ballantine & Sons was also rumored to have matured the India Pale Ale in huge wooden vats for up to a year in order to help develop the ale’s original flavor.

In order to replicate the original recipe as closely as possible, Pabst Master Brewer Gregory Deuhs reverse-engineered the beer, ensuring the robust heritage and quality of the 136-year-old brew was properly reflected in the 21st century version.

“I began this project with a simple question: How would Peter Ballantine make his beer today?” said Master Brewer Deuhs, adding, “There wasn’t a ‘secret formula’ in anyone’s basement we could copy, so I conducted extensive research looking for any and all mentions of Ballantine India Pale Ale, from the ale’s processing parameters, aroma and color, alcohol and bitterness specifications. Many brewers and craft beer drinkers would be impressed that the Ballantine India Pale Ale of the 1950s and ‘60s would rival any craft IPA brewed today.”

Over the course of two years and over two dozen iterations of five-gallon batches handmade at his home near Milwaukee, WI, Deuhs finally struck gold.

“Unlike recreating a lost brew from long ago, I had the advantage of actually being able to speak with people who drank Ballantine back in the day,” continued Deuhs. “Their feedback was crucial to ensuring that the hoppy, complex flavor that was revered for over a hundred years was front and center in my recipe.”

It will be sold in six-pack bottles and limited-edition 750 ml bottles beginning in northeast market, and hopefully released in wider distribution after that. 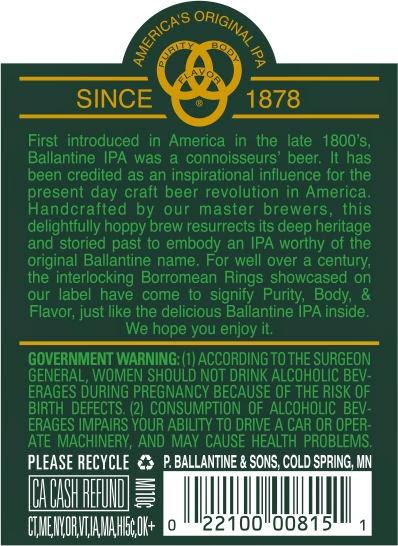 Here’s some more info about the new Ballantine IPA: