You are here: Home / Editorial / Catholic Irony vs. Miller

There’s a festival in San Francisco every year, the Folsom Street Fair, that celebrates sexual diversity, fetishes and leather lifestyles. The event has a rich history of fighting conventional wisdom and poverty, as well. It’s a registered non-profit organization and also has all the things that typical street fairs have: music, food, beer and sponsors. One of the four main event sponsors this year, known as “presenting sponsors,” is Miller Brewing Co. Which is all well and good, or at least it was until the fair organizers unveiled this year’s poster for the event. 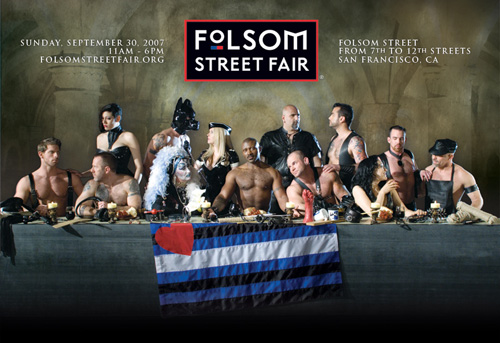 It’s an obvious parody of Leonardo Da Vinci’s painting The Last Supper, which along with his Mona Lisa, Edward Hopper’s Nighthawks, Grant Wood’s American Gothic and Edvard Munch’s The Scream, is undoubtedly one of the most parodied works of art in the world. Do a Google Image’s search for “last supper parody” and no less than 6,360 images pop up. The poster is meant to show diversity in many forms; racial, gender, sexual preference and lifestyle. If you’re deeply religious it’s possible that you won’t like the image but that’s the price you pay for living in a free society. Everybody wants tolerance in the first person, such as “tolerate my beliefs” but it’s gets harder for those same people in the third person, as in “tolerating his beliefs.” Enter the Catholic League, which bills itself as a “Catholic civil rights organization” and states its purpose is to “defend the right of Catholics – lay and clergy alike – to participate in American public life without defamation or discrimination.” Their mission also includes working “to safeguard both the religious freedom rights and the free speech rights of Catholics whenever and wherever they are threatened.” All laudable goals, except that it appears the free speech rights of non-catholics count for naught. Since Tuesday the Catholic League has put out five press releases “calling on more than 200 Catholic, Protestant, Jewish, Muslim, Buddhist and Hindu organizations to join with [them] in a nationwide boycott of Miller beer.”

While Miller has supported the Folsom Street Fair for several years, we take exception to the poster the organizing committee developed this year. We understand some individuals may find the imagery offensive and we have asked the organizers to remove our logo from the poster effective immediately.

Not good enough, sayeth the Catholic League, calling Miller’s press release a “lame statement of regret.” Then they kicked things into high gear. “We feel confident that once our religious allies kick in, and once the public sees the photos of an event Miller is proudly supporting, the Milwaukee brewery will come to its senses and pull its sponsorship altogether. If it doesn’t, the only winners will be Anheuser-Busch and Coors.” See, even Catholics aren’t aware of the craft beer movement and believe there are only three breweries in the U.S. And certainly imports were overlooked, too. Some kidding aside, this is certainly a quagmire for Miller, and this has been receiving a lot of media attention, as stories involving sex usually do in our society. There’s nothing like titillation to increase reader- and viewer-ship.

Locally, at least, not everybody agrees as one gay member of the clergy had this to say via the Bay Area Reporter.

“I disagree with them I don’t think that [Folsom Street Events] is mocking God,” said Chris Glaser, interim senior pastor at Metropolitan Community Church – San Francisco. “I think that they are just having fun with a painting of Leonardo da Vinci and having fun with the whole notion of ‘San Francisco values’ and I think it’s pretty tastefully and cleverly done.”

Glaser added, “I think that oftentimes religious people miss out on things because they don’t have a sense of humor. That’s why being a queer spiritual person we can laugh at ourselves and laugh at other people.”

Even Speaker of the House Nancy Pelosi, herself a Catholic, issed the following through her press secretary, Drew Hammill. “As a Catholic, the speaker is confident that Christianity has not been harmed.” Exactly. And while the people Fox News interviewed called it a “mockery of religion,” “blasphemy” and suggested that it’s “bad for society,” I can’t see the Catholic League’s point.

First of all, they don’t own the image of Da Vinci’s Last Supper and it’s already been parodied countless times. The event itself has been painted by numerous artists over the centuries. Honestly, I don’t see how the “religious freedom rights and the free speech rights of Catholics” have been infringed upon or how catholics have been in any way defamed. The Last Supper even as an idea is not the exclusive province of Catholicism. If they had left it alone, it would have been a minor event in a local community.

And why pick on Miller? There are dozens of other sponsors, too, including SF Environment, an environmental group, and the San Francisco Bay Guardian, a local weekly newspaper. I almost hate to wonder, might this also be a little bit because it’s beer? Many neo-prohibitionist groups are also religiously based. But really, what did Miller do wrong? They sponsored a local event that’s perfectly legal, has the support of the local community and government. They’ve been sponsoring it for years. Then suddenly the event does something that the Catholic League doesn’t like. They’re offended. So what? Miller tries to soothe the situation, obviously seeing it for the powderkeg it is and asks to have their logo taken off the offending poster, but bravely continues to sponsor the event. Good for them. Why shouldn’t they? How is that in any way the “corporate arrogance” the Catholic League accuses them of? What’s arrogant about that? If you want to talk arrogance, then we need to look at the Catholic League. Being arrogant is defined as “making claims or pretensions to superior importance or rights,” which is exactly what they’re doing by asserting that their “right” to not have their religion criticized or challenged — if indeed that’s really what’s being done, which I seriously doubt — is above the free speech rights of the criticism or challenge. I doubt many in the Catholic League have read Richard Dawkin’s The God Delusion, but one of the book’s soundest arguments is that religion has become the only idea, concept, belief, whatever that can’t be criticized. That we’re taught we must respect one another’s beliefs and not question them. Why? Why is every single other idea in the world able be talked about critically but not religion? It just doesn’t make sense to me. Obviously, the Catholic League believes that or they wouldn’t be misreading this so badly. It seems obvious to me that the Folsom Street Fair poster isn’t attacking or criticizing religion and certainly isn’t targeting the Catholic religion. It’s obviously parody, which is protected speech under the First Amendment of our Constitution. Even the Supreme Court has said so, thanks to an unlikely person, Larry Flynt, publisher of Hustler, whose story is chronicled in the film The People vs. Larry Flynt.

But again, why pick on Miller? They didn’t make the poster. They didn’t print the poster. They didn’t approve the poster. All they did was sponsor the event. The Catholic League is the bully in this passionate play, and they’re the ones that deserve to be crucified, not Miller. It’s one thing to disagree with another point of view or not like what you perceive as criticism of your own, but it’s quite another to attack it and try to harm their business over that disagreement. That’s what bullies do. But there’s one more bit of irony in all this that needs saying. Obviously, many catholics and other religious conservatives have a great deal of difficulty dealing with non-traditional sexual lifestyles, some of which are center stage in the Folsom Street Fair. But the Catholic Church is no stranger to non-traditional sexual practices among its own clergy and has systematically been suppressing its own sexual misconduct literally ruining the lives of hundreds, maybe thousands, of children in the process. Check out the film Deliver Us From Evil for just the tip of iceberg. That’s really offensive, worthy of people being offended, not like this fake controversy and complaints of being wounded simply by an image they don’t like.