You are here: Home / Just For Fun / DWB: Driving While A Brewery

Late last year, a judge in Buffalo, New York, dismissed a case against a 35-year old teacher who was stopped and charged with a DWI. When Hamburg Town Police originally arrested the teacher, her blood alcohol was measured to be .33 percent, more than four times higher than the state’s legal limit. The first question is how on earth was she still alive? The second, is how is that possible? It turns out she suffers from a rare condition known as auto-brewery syndrome, or gut fermentation syndrome. The condition manifests itself “in which intoxicating quantities of ethanol are produced through endogenous fermentation within the digestive system. One gastrointestinal organism, Saccharomyces cerevisiae, a type of yeast, has been identified as a pathogen for this condition.” It can also give a false positive for being drunk, and has been used several times as a defense in drunk driving cases.

And that’s exactly what happened in this case, as reported by the Buffalo News reported in late December, Woman’s body acts as ‘brewery,’ so judge dismisses DWI. If that sounds about as realistic as a pregnant woman trying to get out of a fine for driving in the commuter lane (which has actually happened) it’s apparently a real thing, though is extremely rare. So don’t get any ideas.

This Guy Brewed Beer in His Stomach and the Mad Science Blog also tackled Auto-Brewery Syndrome. And even NPR has reported on the phenomenon. According to a report on CNN:

Also known as gut-fermentation syndrome, this rare medical condition can occur when abnormal amounts of gastrointestinal yeast convert common food carbohydrates into ethanol. The process is believed to take place in the small bowel, and is vastly different from the normal gut fermentation in the large bowel that gives our bodies energy.

First described in 1912 as “germ carbohydrate fermentation,” it was studied in the 1930s and ’40s as a contributing factor to vitamin deficiencies and irritable bowel syndrome. Cases involving the yeast Candida albicans and Candida krusei have popped up in Japan, and in 2013 Cordell documented the case of a 61-year-old man who had frequent bouts of unexplained drunkenness for years before being diagnosed with an intestinal overabundance of Saccharomyces cerevisiae, or brewer’s yeast, the same yeast used to make beer.

So while you may laugh — or I might at least — it’s apparently no fun for ABS sufferers. Better to raise your blood alcohol via the traditional way, ingesting beer brewed by a professional. 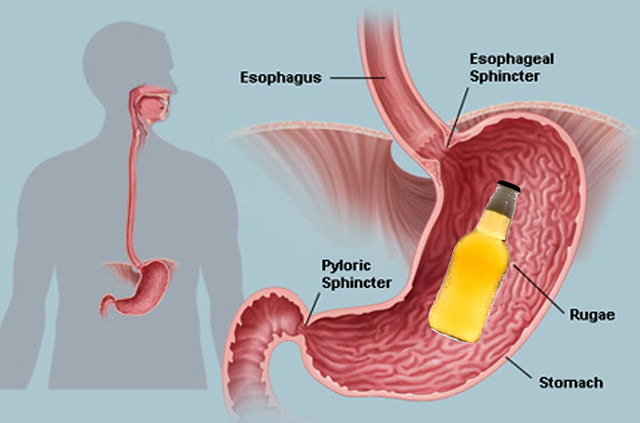