Today is the birthday of Hans Adolf Krebs (August 25, 1900-November 22, 1981). He was a German-born British physician and biochemist. He was the pioneer scientist in study of cellular respiration, a biochemical pathway in cells for production of energy. He is best known for his discoveries of two important chemical reactions in the body, namely the urea cycle and the citric acid cycle. The latter, the key sequence of metabolic reactions that produces energy in cells, often eponymously known as the “Krebs cycle,” earned him a Nobel Prize in Physiology or Medicine in 1953. And it’s the Krebs cycle that is his relation to brewing, as it’s also known as the respiratory phase, the second aerobic state of the fermentation process immediately following the lag period. 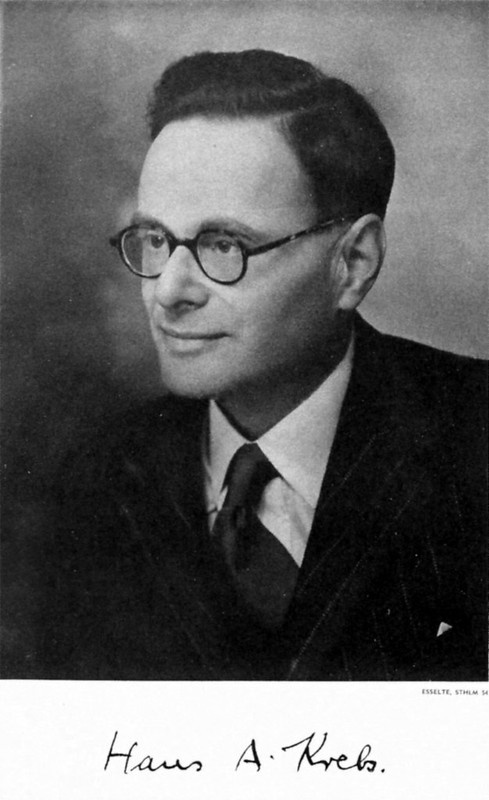 Here’s a description of the Krebs cycle from Life Fermented:

The Krebs cycle, also known as the tricarboxylic acid (TCA) cycle or the citric acid cycle, is a circular and repeating set of reactions which requires oxygen. In beer making, this would occur in the first stage of fermentation when the yeast is pitched into a well aerated wort, and carries on until all oxygen is used up.
Pyruvate (are you tired of this word yet?) is first converted to acetyl-CoA (pronounced “Co-A”) in the following reaction:

pyruvate + 2 NAD+ + CoA-SH → acetyl-CoA + CO2 + NADH, with the help of the pyruvate dehydrogenase (PDH) complex. Note that this is the first time CO2 is produced, and yet more NADH is generated.

This acetyl-CoA then enters into a cycle of reactions which nets two molecules of CO2, one GTP (guanosine triphosphate, another unit of energy equivalent to ATP), three NADH, and one FADH2 (flavin adenine dinucleotide, which functions similarly to NADH). After the cycle completes, another acetyl-CoA molecule enters and the cycle repeats itself.

But wait, this just made more NADH, and we need to regenerate NAD+ so glycolysis can continue. Both the NADH and FADH2 now donate their electrons to a process called the electron transport chain/ oxidative phosphorylation. The result is a return of NAD to the NAD+ state, and a large amount of ATP cellular energy.

Because the Krebs cycle is so efficient at producing ATP energy units, this is the yeast’s preferred pathway. But, you’ll notice a rather conspicuous absence: ethanol. This is only formed in the absence of oxygen. 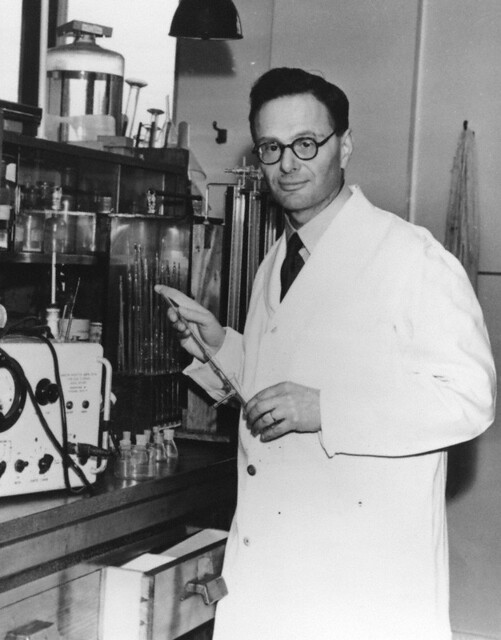 Here’s a biography of Krebs, from the Nobel Prize website:

Sir Hans Adolf Krebs was born at Hildesheim, Germany, on August 25th, 1900. He is the son of Georg Krebs, M.D., an ear, nose, and throat surgeon of that city, and his wife Alma, née Davidson.

Krebs was educated at the Gymnasium Andreanum at Hildesheim and between the years 1918 and 1923 he studied medicine at the Universities of Göttingen, Freiburg-im-Breisgau, and Berlin. After one year at the Third Medical Clinic of the University of Berlin he took, in 1925, his M.D. degree at the University of Hamburg and then spent one year studying chemistry at Berlin. In 1926 he was appointed Assistant to Professor Otto Warburg at the Kaiser Wilhelm Institute for Biology at Berlin-Dahlem, where he remained until 1930.

In I930, he returned to hospital work, first at the Municipal Hospital at Altona under Professor L. Lichtwitz and later at the Medical Clinic of the University of Freiburg-im-Breisgau under Professor S. J. Thannhauser.

In June 1933, the National Socialist Government terminated his appointment and he went, at the invitation of Sir Frederick Gowland Hopkins, to the School of Biochemistry, Cambridge, where he held a Rockefeller Studentship until 1934, when he was appointed Demonstrator of Biochemistry in the University of Cambridge.

In 1935, he was appointed Lecturer in Pharmacology at the University of Sheffield, and in 1938 Lecturer-in-Charge of the Department of Biochemistry then newly founded there.

Professor Krebs’ researches have been mainly concerned with various aspects of intermediary metabolism. Among the subjects he has studied are the synthesis of urea in the mammalian liver, the synthesis of uric acid and purine bases in birds, the intermediary stages of the oxidation of foodstuffs, the mechanism of the active transport of electrolytes and the relations between cell respiration and the generation of adenosine polyphosphates.

Among his many publications is the remarkable survey of energy transformations in living matter, published in 1957, in collaboration with H. L. Kornberg, which discusses the complex chemical processes which provide living organisms with high-energy phosphate by way of what is known as the Krebs or citric acid cycle.

Krebs was elected a Fellow of the Royal Society of London in 1947. In 1954 the Royal Medal of the Royal Society, and in 1958 the Gold Medal of the Netherlands Society for Physics, Medical Science and Surgery were conferred upon him. He was knighted in 1958. He holds honorary degrees of the Universities of Chicago, Freiburg-im-Breisgau, Paris, Glasgow, London, Sheffield, Leicester, Berlin (Humboldt University), and Jerusalem.

He married Margaret Cicely Fieldhouse, of Wickersley, Yorkshire, in 1938. They have two sons, Paul and John, and one daughter, Helen.

And in the Microbe Wiki, on a page entitled “Saccharomyces cerevisiae use and function in alcohol production,” under a section called “Fermentation of alchohol,” the Krebs cycle is placed in its portion in the fermentation process:

Saccharomyces cerevisiae is able to perform both aerobic and anaerobic respiration. The process begins with the yeast breaking down the different forms of sugar in the wort. The types of sugars typically found in wort are the monosaccharides glucose and fructose. These sugars contain a single hexose, which is composed of 6 carbon atoms in the molecular formula C6H12O6. Disaccharides are formed when two monosaccharides join together. Typical disaccharides in the wort are galactose, sucrose, and maltose. The third type of fermentable sugar in the wort is a trisaccharide. This trisaccharide is formed when three monosccharides join together. Maltotriose is the trisaccharide commonly found in the wort and is composed of three glucose molecules. The wort does contain other sugars such as dextrins but it is not fermentable by yeast10. These dextrins contain four monosaccarides joined together. In order for the yeast to use the disaccharides and trisaccharides they first must be broken down to monosaccharides. The yeast does this by using different enzymes both inside and outside the cell. The enzyme invertase is used to break down sucrose into glucose and fructose. The invertase catalyzes the hydrolysis of the sucrose by breaking the O-C (fructose bond). The other enzyme used is maltase, which breaks down maltose and maltotriose into glucose inside the cell. The enzyme does this by catalyzing the hydrolysis of the sugars by breaking the glycosidic bond holding the glucose molecules together.

Once the sugars are broken down into monosaccharides the yeast can use them. The primary step is called glycolysis. In this process the glucose is converted to pyruvate using different enzymes in a series of chemical modifications. The electrons from glucose end up being transferred to energy carrying molecules like NAD+ to form NADH. ATP is also formed when phosphates are transferred from high-energy intermediates of glycolysis to ADP. In the presence of oxygen aerobic respiration can occur. This occurs in the mitochondria of the yeast. The energy of the pyruvate is extracted when it goes through metabolic processes like the Krebs cycle. The products of this type of metabolism are ATP, H2O, and CO2. However if there is no oxygen present and an abundance of sugars, as in the wort, the yeast undergo alcoholic fermentation. This type of metabolism yields much smaller amounts of energy when compared to aerobic respiration. However, because of the large supply of sugars from the different grains the wort is a very good environment for fermentative growth. The alcoholic fermentation begins with the two pyruvate acquired from glycolysis. These two pyruvate are decarboxylated by pyruvate decarboxylase to form two acetaldehydes and CO2. The CO2 is the gas that is observed during fermentation as bubbles that float to the top of the wort creating the kräusen or beer head, the foam that is very characteristic of a freshly poured beer. Pyruvate decarboxylase is a homotetramer meaning it contains four identical subunits. This also means that is has four active sites. The active sites are where the pyruvate reacts with the cofactors thiamine pyrophosphate (TPP) and magnesium to remove the carbon dioxide9. The final step to form alcohol is the addition of a hydrogen ion to the aldehyde to form ethanol. This hydrogen ion is from the NADH made during glycolysis and converts back to NAD+. The ethanol is originally believed to serve as an antibiotic against other microbes. This form of defense ensures that bacteria do not grow in the wort, thus ruining the beer with off flavors. However recently with the boom of craft beer different bacteria have been purposefully added to create what is known as sour beer. The sour taste comes from the waste products of the bacteria. 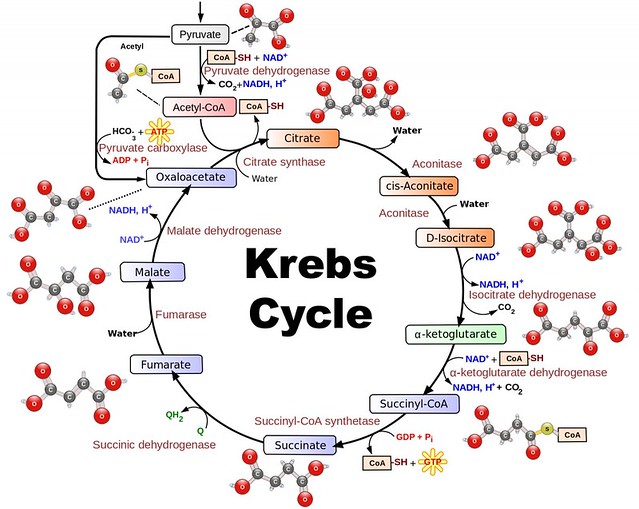 To learn more about the Krebs cycle check out this video from the University of Oklahoma’s Chemistry of Beer – Unit 7 – Chemical Concepts: Krebs Cycle: