Today in 1917, US Patent 1234255 A was issued, an invention of Charles S. Ash, for his “Process of Treating Beer.” There’s no Abstract, although in the description it includes this summary:

This invention relates to a process of treating beer; and has for its object to stabilize beer by eliminating the causes of cloudiness and turbidity therein, and also to prevent the development of color and the development of a cooked taste in the beer following pasteurization.

In the brewing and finishing of beer, the aim of the brewer is to obtain a product which is brilliantly clear and transparent and which will so remain under all conditions of subsequent handling.

Beer is rendered turbid or cloudy on standing, particularly in the cold, by reason of the precipitation of nitrogenous bodies. In the process of mashing the grains and making the wort, which is subsequently fermented, a portion of the nitrogenous bodies of the grain is brought into solution. After the fermentation and the aging or lagering to which the new beer is subjected some of these nitrogenous bodies are precipitated and are removed by filtration. After the final filtration the beer is brilliant, but upon storage in the case of keg beer, and upon pasteurization and storage in the case of bottled beer, the beer gradually becomes cloudy and finally turbid.

There are two ways in which this cloudiness and turbidity can be prevented; first, by the absolute removal-of the nitrogenous bodies still held in the lagered beer, which are susceptible to subsequent precipitation through storage or heating or cooling; and, second, by treating the lagered beer in such a manner that these, nitrogenous bodies remain in solution. The first method has never been hitherto successfully accomplished. The second method has yielded results of more or less value and is accomplished by adding to the beer substances known as enzymes, which have the power of rendering these insoluble nitrogenous bodies soluble and hence the beer remains brilliant. 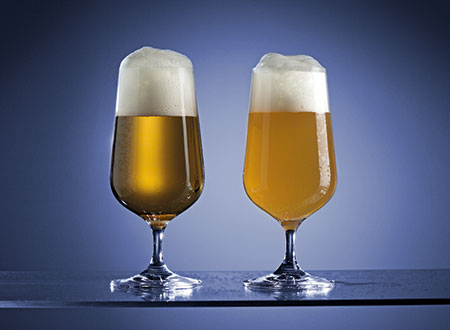 Two beers with the same color, but different turbidity.