Today in 1934, US Patent 1975241 A was issued, an invention of John C. Sampson and Phil J. Werber, for his “Drinking Vessel.” There’s no Abstract, although in the description it includes this summary:

In serving cold or hot beverages, it is desirable to maintain the beverage at the ‘required temperature when set. on the table before the consumer. In serving ice-cold beverages, such as beer, the container, which may be a glass, a stein or the like, has to be chilled before using and has to be replaced after each use since it absorbs heat and becomes warm and renders the beverage warm and flat. Furthermore, condensation takes place on the exterior of such vessel and renders the table on which it stands damp and unpleasant in appearance. The glasses or steins are heavy and are liable to break, while copper mugs and the like require constant polishing and cleaning.

One of the main objects of the invention is the provision of a drinking vessel having insulated walls thereby maintaining the beverage contained therein aty its proper temperature for a long period of time without requiring replacing or chilling of the vessel after each use and without causing condensation on the surface of the vessel. Another object of the invention is to provide a drinking vessel having insulated walls to preserve the original temperature of the beverage, said vessel being so constructed that. it is light in weight, is practically indestructible, and can be readily cleaned.

Further objects of the invention are to provide a drinking vessel having an inner member or cup and having an outer shell member, said members being held in spaced relation with each other and the space therebetween being filled with suitable insulating material to prevent transmission of heat between said members.

Still further objects of the invention are to provide a drinking vessel for ice-cold beverages, such as beer, comprising an inner or cup member formed of a single piece of metal and enclosed by an outer or shell member formed of formica, hard rubber, or other heat insulating material, the upper end of said inner member being turned outwardly and downwardly to t over the upper edge of said shell member and form a rubber. 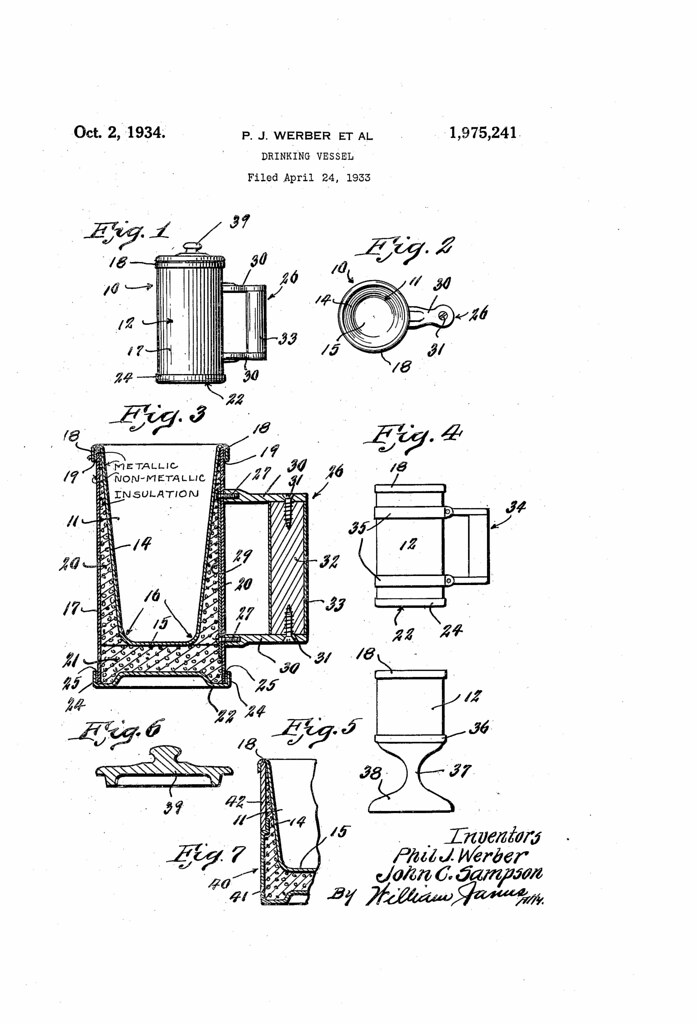