Today in 1943, US Patent 2331556 A was issued, an invention of Hans Olof Lindgren, for his “Process For Purifying Wort.” There’s no Abstract, although in the description it includes this summary:

The object of the invention is to provide a method of purifying, cooling, and aerating the wort, the main part of which is carried out as a continuous process, which is free of the above objections. The warm Wort leaving the hops boiler, at a temperature which is usually above 85 C. (185 FJ, and which should not be below ’70 C. (158 F.), or above 100 C. (212 F), is strained with a view to removing the coarsest impurities. It is then purified in a centrifuge f1 om which the purified Wort is discharged continuously. The wort is then passed through a cooler of such a construction that it cannot therein come into contact with the atmosphere. The cooled wort is conveyed to tanks, e. g., similar to the fermenting vats above described, in which the cool sludge is removed from the wort by finely divided air which has been mixed therewith at some step of the Process at which the wort is hot enough to sterilize the air, and which in the tank 6 lifts the .cool sludge to the surface. The air and the impurities, together with a small amount of wort, there form a layer of froth which may be skimmed off. If a suitable amount of air is used, a satisfactory purification is obtained at the same time, as the amount of wort contained in the froth is so small that it is unnecessary to take any measures for recovering it. The finely divided air need not be sterile unless it is introduced into the stream after the Wort has been partly or wholly cooled. 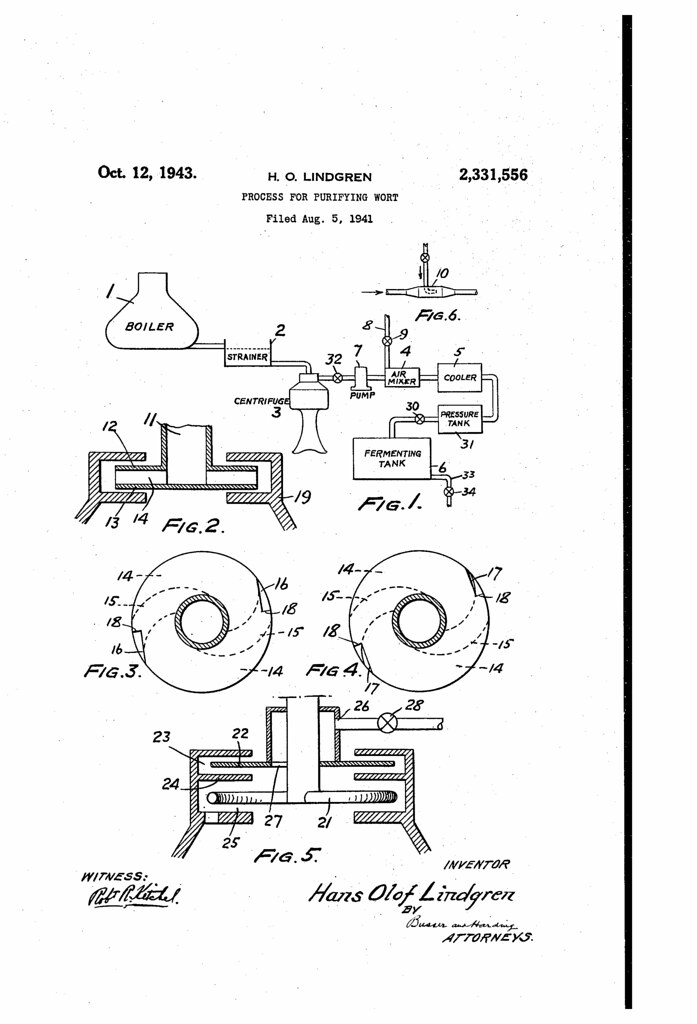