Today in 1965, US Patent 3212854 A was issued, an invention of Mohd Akhtar and Max William Betts, for their “Estimate of Hop Bitter Substance in Beer.” There’s no Abstract, although in the description it includes this summary:

This invention relates to the extraction of substances which impart the distinctive bitter taste to beer and to their estimation.

In this specification by hop bitter substances we mean all isohumulones, and humulones as well as humulinic and isohurnulinic acids as well as any other substances which may contribute to the bitter taste of been In this specification by the term beer (except where otherwise stated) we mean hopped wort or beer or any other liquid used in a brewing process whose hop bitter content is required to be known. We also intend the term beer to include any beer in the complete range from light beers such as lagers to heavy beers such as stouts.

The percentage of hop bitter substances in hops varies sufficiently to affect the bitterness of a beer, but until recently no satisfactory chemical method for estimating hop bitter substances was known. Therefore, to keep the bitterness of a beer produced constant, experts had to taste it during the brewing process and advise on what additions were needed. This not only made the product dependent on human judgment but also necessitated brewing beer in batches.

In order to improve the partition coefficient of the hop bitter substances between the beer and the water-insoluble solvent, the beer is preferably acidified, prior to undergoing the process of the present invention. The preferred acids used are sulphuric acid or hydrochloric acid. We have found that to get the best results the pH of the beer solution should be less than about 3.5.

A large number of water-insoluble organic solvents effectively extract hop bitter substances from beer, but considerable quantities of accompanying materials may also be extracted which interfere with the subsequent spectrophotometric measurement. Hydrocarbon solvents such as light petroleum, hexane or iso-octane extract a relatively low amount of these interfering substances compared with extractions using chloroform or diethyl ether. Preferably the water-insoluble solvent used is optically suitable iso-octane.

The beer (here the term beer is used to exclude hopped wort which is already degassed) must be thoroughly degassed by any convenient method.

A method of making the solution of hopped bitter substances alkaline is to add aqueous alkali, for example caustic soda, to the solution followed by mixing. We prefer to pass this mixture to a separator, for example a gravity separator, whereupon pure or nearly pure water insoluble solvent is separated leaving a solution of hop bitter substances and alkali to be passed to the ultra violet spectrophotometer. If necessary further alkali may be added after the separation step.

The temperature at which the extraction takes place will of course have an effect on the partition coefficient of the hop bitter substances between beer and the water insoluble solvent, however, we have found it quite convenient to operate the process at room temperature.

Previous methods of extracting hop bitter substances from beer have involved the use of a counter-current flow column. We have found that substantially the same percentage of hop bitter substances can be extracted by using the process of our invention by using a comparatively short chamber which we call a jet chamber. A jet chamber of as short as 2 inches has been found to have an extraction efficiency of the same order as that obtained by using a counter-current flow column over 8 feet long. However, we prefer to use a jet chamber 3 inches to 4 inches long, especially when extracting from a stout.

Instead of operating on the counter-current flow principle our extraction process depends on the turbulence created in the beer droplets by the velocity with which they emerge from the orifices into the jet chamber and pass through the water-insoluble solvent. must be very carefully regulated. If, for instance, the beer droplets have a Reynolds number of above about 2,000, cavitation will occur in the water-insoluble solvent and an emulsion will be formed. This emulsion as previously stated is very difficult to break and its formation must be prevented, hence the beer droplets must initially have a Reynolds number below about 2,000. On the other hand, if the velocity of the beer drops is too low, only the beer at the surface of the beer drops will ever be in contact with the water-insoluble solvent and all the hop bitter substances in the centre of the drops will remain in the beer. The velocity of the drops must therefore be high enough to create turbulence inside the said drops. By turbulence in this context we mean that there is a continuous circulation of beer inside the drops to and from the surface of said drops. This will result in equilibrium, as defined by the partition coefficients of the hop bitter substances between beer and the water insoluble solvent, being approached very rapidly. As far as we can gather turbulence occurs inside the beer drops to a useful degree for our purposes provided that the drops have a Reynolds number of over 70.

If the beer is passed through a small jet it is essential that the beer does not contain any particles of solid matter having a diameter of over about half the diameter of the orifices used, otherwise the orifices are likely to become blocked easily. The particles in the beer may be removed by any convenient filtering process, for example by centrifuging or by using a mesh filter. 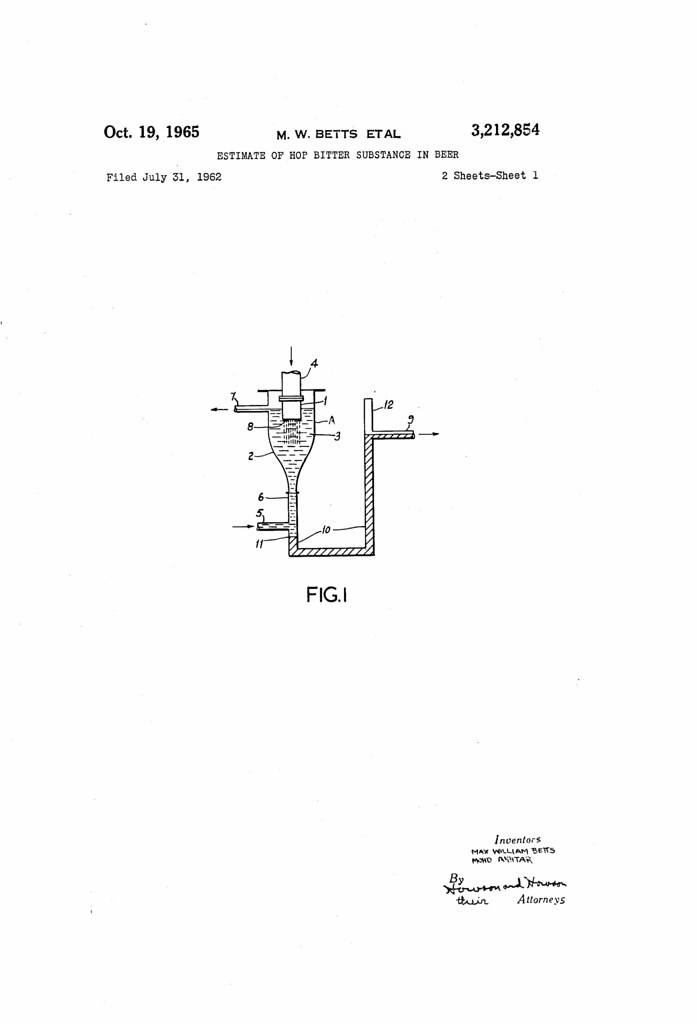 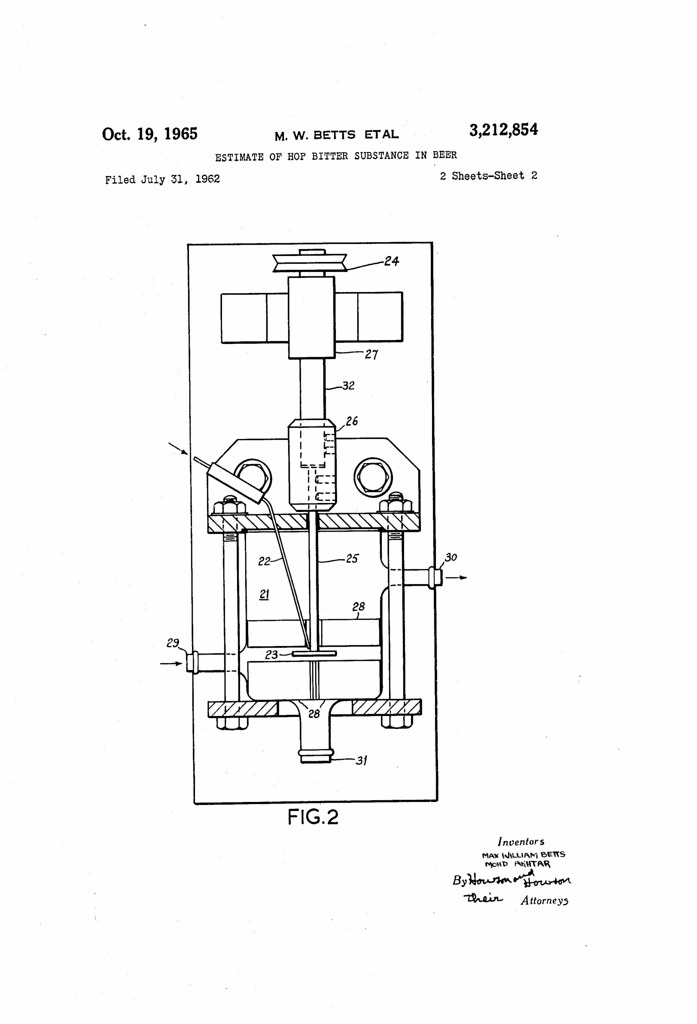