Today in 1970, US Patent 3525625 A was issued, an invention of Robert A. Groulx and Orland O. Schaus, assigned to Canadian Breweries Ltd., for their “Fermentation of Wort.” There’s no Abstract, although in the description it includes this summary:

This invention relates to the fermentation of wort in the making of a potable alcoholic brewery beverage such as ale.

Various types of yeast are used in the making of alcoholic brewery beverages wherein a yeast fermentable substrate known as brewers wort is fermented by the action of a yeast to give a potable beverage. The general process is very well known and description of the complete process is not included herein. Some yeasts are heavy and tend to sink to the bottom of the wort substrate. Others are light and tend to rise to the top of the. substrate. These latter yeasts are called top fermenting yeasts and are commonly used in the manufacture of a type of alcoholic brewery beverage generally known as ale. This invention is concerned with the control of the size of the yeast cap.

Top fermenting yeasts tend to gather in a foam on the top of the fermenting Wort is the fermentation process takes place in what is known in the brewing trade as a yeast cap. This cap often becomes quite deep and represents a substantial quantity of yeast that is not in active contact with the wort. It thus represents an inefficiency in the use of yeast in the process. In many cases, the cap becomes so large that the fermenting vessel overflows with a resulting loss of yeast content and admixed fermenting substrate. This latter condition is known as purging and is wasteful and undesirable. Purging is quite likely to be encountered Where one attempts to use modern accelerated fermentation techniques which involve higher yeast concentrations, elevated temperatures, and agitation of the wort with a view to keeping the yeast in eflicient contact therewith, not only with top fermenting yeasts but also with bottom fermenting yeasts where purging is encountered. While it is, of course, possible to avoid the occurrence of purging by running the fermenting vessel with a lower volume of Wort to provide a greater free board area above the wort surface, this reduces the capacity of a fermenter. From this point of view, it is costly.

It is, therefore, an object of this invention to improve the efficiency of the fermentation process by achieving a more efficient contact of the yeast with the wort.

It is a further object of the invention to control the occurrence of purging in a fermentation process.

It is a still further object of the invention to increase the capacity at which a fermenter may be operated by maintaining the yeast cap at a small dimension. 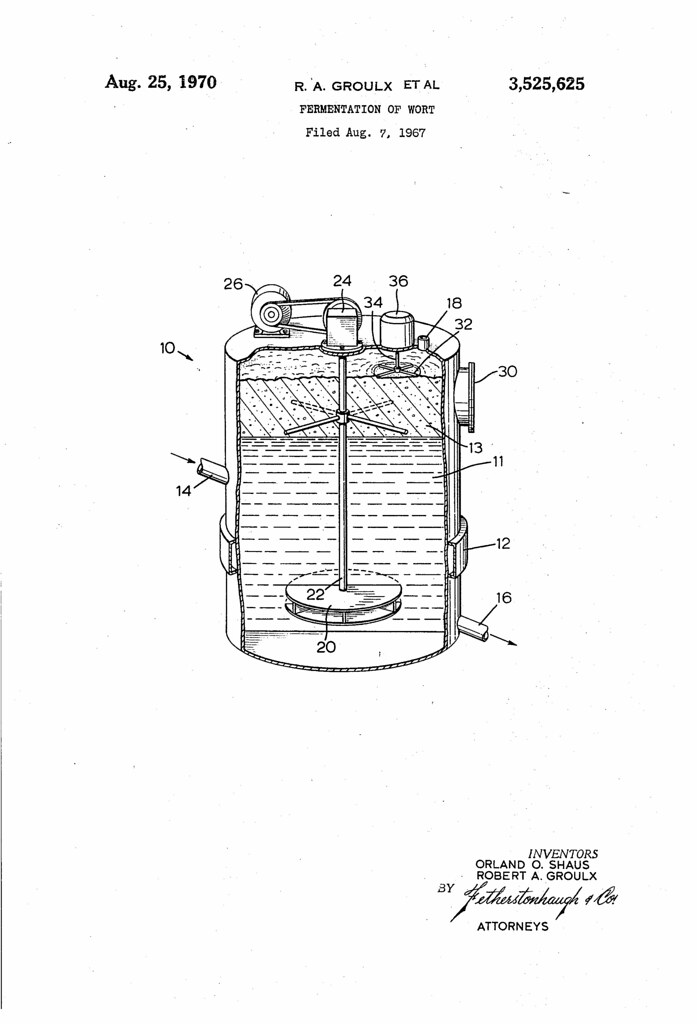