You are here: Home / Beers / Patent No. 3544329A: Electrolysis Of Fermented Beverages

Today in 1970, US Patent 3544329 A was issued, an invention of Erik Johannes Helm and Richard Stanley Wrey Thorne, for their “Electrolysis of Fermented Beverages.” There’s no Abstract, although in the description it includes this summary:

This invention relates to a method and means for the improvement of the flavour of fermented beverages, such as beers, ciders, and wines, by elimination of hydrogen sulphide produced during fermentation.

Hydrogen sulphide is a normal product of yeast metabolism; during fermentation of beverages such as beer it is produced from cysteine by desulphuration and from inorganic sulphate by reduction, and probably from other precursors as well. It is well known to brewers that beer, and particularly newly fermented beer, for this reason often contains so much hydrogen sulphide as seriously to impair its avour, and especially its aroma. Generally speaking, this circumstance applies both to bottom-fermented beers (pilsner and lager types) and to top-fermented beers (ale and stout types).

Accordingly, a process for the elimination of hydrogen sulphide from beer or its reduction to an imperceptible level, a process which might help to abbreviate the economically expensive secondary fermentation, is much to be desired.

The extremely low solubility product of copper sulphide suggests that a very simple means to this end might be to dose small quantities of, for example copper sulphate into beer so as to precipitate all of its hydrogen sulphide in the form of copper sulphide which would be subsequently removed during the regular beer ltration prior to bottling. However, the fact that beers normally contain traces of copper of the order of 0.1 p.p.m. or more which are as a rule more than equivalent to the amount of hydrogen sulphide to be removed, Without any such removal actually taking place, suggests that the problem is not quite so simple as it may at rst sight appear. It is true that the addition of an excess of copper sulphate to beer, of the order of l p.p.m. of copper, does indeed remove all perceptible hydrogen sulphide from it, but the relatively high concentration of residual copper remaining in the beer constitutes such a technical disadvantage that this procedure could not be seriously advocated for practical use. The drawback attaching to soluble copper in beer is that it rather drastically reduces the stability (shelflife) of the beer: copper accelerates the precipitation of proteinaceous material from the beer, rendering it cloudy and unsaleable. Presumably, the small amount of copper normally present in beer is already complexed to proteinaceous material in the beer so that it is unavailable for precipitating the hydrogen sulphide. Similarly, the excessive amount of copper sulphate which is necessary to eliminate hydrogen sulphide from beer must be attributed to most of the copper immediately being complexed, only a minor amount being available to react with the hydrogen sulphide.

The present invention comprises dosing suitably small quantities of copper into beer by means of electrolytic dissolution. Trials have shown that by this procedure the hydrogen sulphide may be removed from beer without causing any appreciable increase in its copper content.

According to this invention, beer, during the course of its passage to the filter, is passed between two electrodes of electrolytic copper, or between two electrodes one of which, the anode, is ot electrolytic copper. By the application of a suitable electromotive force across the electrodes copper passes into solution into the beer; the concentration of copper so dissolved depends only upon (a) the quantity of electricity passing through the beer (measured by the product of current strength and time), and (b) the velocity of the beer flowing past the electrodes. Copper dissolution is therefore precisely controllable by regulating current strength in relation to beer velocity. 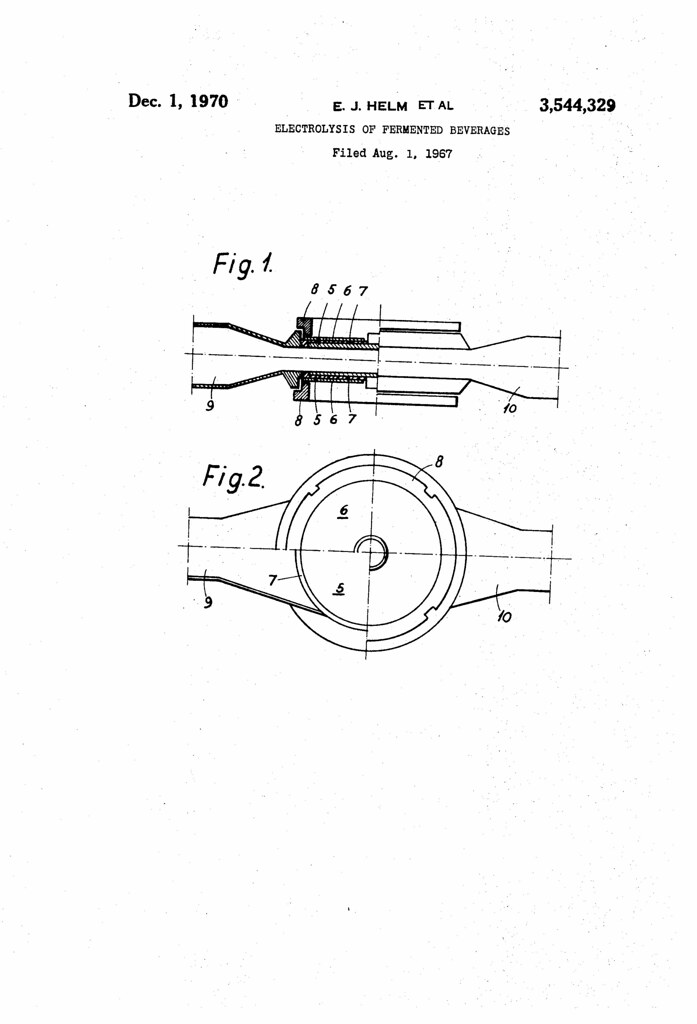