You are here: Home / Beers / Scientific Proof You Can’t Get Drunk On Beer

Here’s a stroll down memory lane, when in 1955 a Yale professor, Dr. Leon A. Greenberg, declared that beer isn’t an intoxicating beverage “and should be reclassified to the non-intoxicating drinks.” Greenberg was no stranger to alcohol, and in fact in the 1930s invented the Alcometer, “the first machine that analyzed the breath for alcohol,” before coming to Yale in 1933 to head what would become the Center of Alcohol Studies. Seven years after this story, the center moved to Rutgers. Maybe there’s a connection? Certainly when Dr. Greenberg passed away in 1986, his obituary didn’t mention this chapter in his life.

In the story, other scientists may have thought he’d gone crazy, but restrained themselves from saying so, and diplomatically disagreed.

This brought emphatic objection from other scientists. They wanted to know if the man who is “high” or “tight” isn’t also drunk. Beer certainly makes people “high” and “tight,” they said.

The UP story then described his theory:

For people to show consistently the “abnormal behavior” which goes with intoxication, the alcohol content of their blood must be 0.15 per cent or higher.

THE AVERAGE alcohol content of American beers is 3.7 per cent by weight. In order for the alcohol blood level to be at 0.15 per cent, there would have to be two and one-half quarts of 3.7 beer in the stomach. But the capacity of the human stomach is one and one-half to two quarts.

Therefore, no one can drink enough beer at one time to get intoxicated, according to theory. As for doing it by degrees: beer is destroyed or eliminated in the body at the rate of one-third of a quart an hour. So three quarts would have to be consumed in two or three hours, and this, he said, was “physiologically unnatural.”

His views were published in the official journal of the Yale studies. Other scientists were invited to publish their objections at the same time. And these objections were mainly that Greenberg did not recognize stages or degrees of drunkenness – the differences between a man who is a little drunk and one who is very drunk. 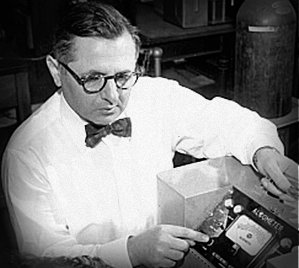 The Minnesota Star Tribune, which in 1955 was apparently just the Minnesota Tribune, also ran the story on July 7, 1955, but they gave more space to Dr. Greenberg’s dissenters. As they note, it “demonstrates that you can be right about all the facts and still come to the wrong conclusion.”

Dr. Albion Roy King, professor of philosophy, Cornell college, Mount Vernon, Iowa, said Greenberg has performed a “feat of word manufacture and manipulation which simply makes more graphic what everybody knows, that it takes more drinking to get tight on beer than on whisky.”

Dr. Harry M. Tiebout, a psychiatrist and vice chairman of the Connecticut commission on alcoholism, said Greenberg’s view is “simple nonsense – in the eyes of most beer drinkers.”

“They may know nothing about their blood level or the percentage alcohol content of the beer drink, and they care less.

“What they do know is that they get drunk on beer, using their definition. Alcohol is alcohol, in any concentration and its regular use can lead to trouble.”

It certainly seems almost silly to think he went public with such an obviously false conclusion. Beer may be the beverage of moderation, but it will still give you a buzz. And simple experience would teach anyone that much better than at least one Yale professor. Happy Friday! 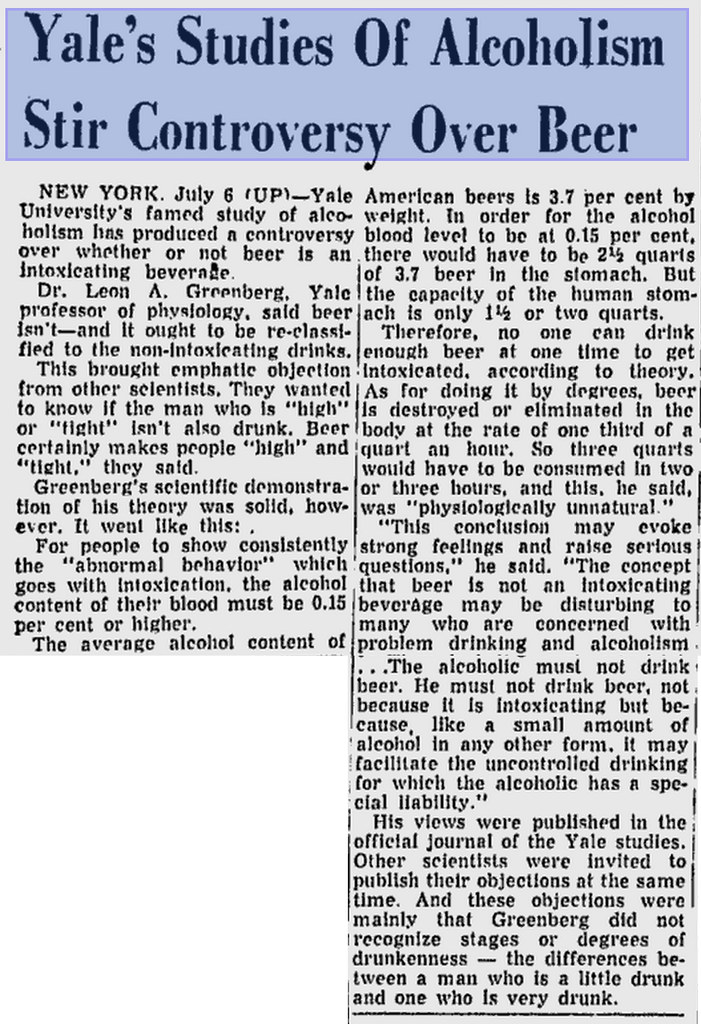