The theory that it was beer that caused early man to make the transition from hunter/gatherers to farmers instead of bread, thus starting civilization itself, has been gathering steam since it was first proposed by anthropologists in the 1950s. The latest support comes from archaeologist Brian Hayden at Simon Fraser University in Canada, who will be submitting his recent research to the journal Current Archeology. His theories suggest that it wasn’t just the beer that was important, but its use in rituals like feasts that help bring people together.

From the article in Live Science:

The advent of agriculture began in the Neolithic Period of the Stone Age about 11,500 years ago. Once-nomadic groups of people had settled down and were coming into contact with each other more often, spurring the establishment of more complex social customs that set the foundation of more-intricate communities.

The Neolithic peoples living in the large area of Southwest Asia called the Levant developed from the Natufian culture, pioneers in the use of wild cereals, which would evolve into true farming and more settled behavior. The most obvious explanation for such cultivation is that it was done in order to eat.

Archaeological evidence suggests that until the Neolithic, cereals such as barley and rice constituted only a minor element of diets, most likely because they require so much labor to get anything edible from them — one typically has to gather, winnow, husk and grind them, all very time-consuming tasks.

Hayden told LiveScience he has seen that hard work for himself. “In traditional Mayan villages where I’ve worked, maize is used for tortillas and for chicha, the beer made there. Women spend five hours a day just grinding up the kernels.”

However, sites in Syria suggest that people nevertheless went to unusual lengths at times just to procure cereal grains — up to 40 to 60 miles (60 to 100 km). One might speculate, Hayden said, that the labor associated with grains could have made them attractive in feasts in which guests would be offered foods that were difficult or expensive to prepare, and beer could have been a key reason to procure the grains used to make them.

“It’s not that drinking and brewing by itself helped start cultivation, it’s this context of feasts that links beer and the emergence of complex societies,” Hayden said.

Feasts would have been more than simple get-togethers — such ceremonies have held vital social significance for millennia, from the Last Supper to the first Thanksgiving.

“Feasts are essential in traditional societies for creating debts, for creating factions, for creating bonds between people, for creating political power, for creating support networks, and all of this is essential for developing more complex kinds of societies,” Hayden explained. “Feasts are reciprocal — if I invite you to my feast, you have the obligation to invite me to yours. If I give you something like a pig or a pot of beer, you’re obligated to do the same for me or even more.”

“In traditional feasts throughout the world, there are three ingredients that are almost universally present,” he said. “One is meat. The second is some kind of cereal grain, at least in the Northern Hemisphere, in the form of breads or porridge or the like. The third is alcohol, and because you need surplus grain to put into it, as well as time and effort, it’s produced almost only in traditional societies for special occasions to impress guests, make them happy, and alter their attitudes favorably toward hosts.”

Food and beer together at the heart of the birth of civilization. Now that’s pairing idea I can get behind.

Biblical Archeology Review has an interesting article in their September/October issue entitled Did the Ancient Israelites Drink Beer?. The author makes some of the same points I’ve often made — but with more authority — that because of mistranslations and bias, beer is mostly absent from the Bible despite the fact that it’s everywhere else in mankind’s early history. The article’s takeaway is a resounding yes, they did drink beer, and lots of it. Not surprising, but great to see that fact getting more scholarly attention. 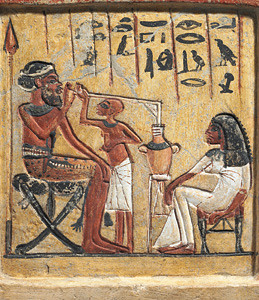 Since we’ve been in the Middle East and Afghanistan, we’ve struggled with how to keep our soldiers happy and yet respect local laws and customs. In March of 2006, General Abizaid of the U.S. Central Command, signed General Order No. 1 to help clarify and determine how our men and women fighting overseas are permitted to relax and conduct themselves. One thing General Order No. 1 prohibits them from enjoying is a beer, or indeed any alcohol whatsoever. 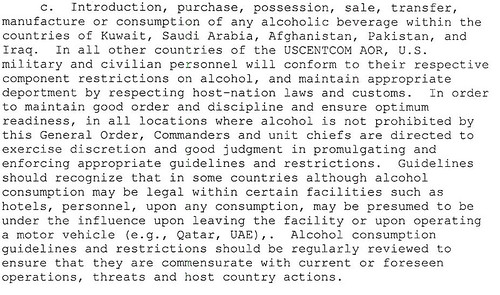 According to a Wired report:

In part, the order is out of sensitivity to “host-nation” culture. But it’s also a major safety issue. Alcohol, firearms and heavy machinery don’t mix, and the Department of Defense doesn’t want to have to explain a rise in negligent weapons discharges to angry members of Congress.

Recently, however, Senator Jim Webb of Virginia (Dem.), during a Senate Armed Services Committee meeting, floated the idea that “U.S. military commanders should consider loosening the ban to allow ‘alcohol for stress relief.’”

Now before you jump down my throat, consider that there’s already a problem with the “increased use — and abuse of — of prescription drugs by deployed troops” with “troops popping pills to fight everything from fatigue to depression. The Pentagon is even investigating using pills as a preventive treatment for post-traumatic stress.” So his suggestion that maybe letting the troops have an occasional beer while off duty might have some benefits to the mental and physical health of our soldiers doesn’t seem too outlandish under the circumstances. During my time in the military I was never in a war zone, so I never experienced this kind of prohibition. Hell, we had a coin-operated soda machine in our day room filled with cans of beer.

But beyond respecting the “host-nation culture,” weren’t troops in World War II, Korea and other police actions permitted limited amounts of alcohol? My stepfather was in Vietnam with the Marines in the early 1960s and I know he drank quite a bit while he was there. From time to time, he’d open up about his time “in country” and what they’d do when they were off-duty, and it involved a lot of drinking, much of did in fact seem designed to relieve stress. I can’t help but think the ban is more a sign of the times than about any real danger from soldier’s drinking in moderation.

If soldiers made it through at least WWII, Korea and Vietnam safely while being able to have a drink, it doesn’t seem like they’d fare any worse today. Winston Churchill quipped that his staff should “make sure that the beer — four pints a week — goes to the troops under fire before any of the parties in the rear get a drop.” And before that John Churchill, First Duke of Marlborough, said. “No soldier can fight unless he is properly fed on beef and beer.” And before that Frederick the Great concluded that “many battles have been fought and won by soldiers nourished on beer.” But yeah, I understand the argument that war is different now, but I’m pretty sure that argument has been used during every single increasingly modern war. I just don’t agree with it. Given all we ask of our soldiers and how badly our government has treated so many of them, I think we should be doing everything possible to help them relax and unwind whenever they get a little time away from the job.

And even within the scope of respecting cultures, it doesn’t seem too out of line to me that something like the “green zone” or some other spot that’s secluded and separated from the native population could be created where soldiers could relax and have a drink. They did just that for the Super Bowl, where an exception was made and beer was served during the game.

Would the military consider lifting its ban on booze? I highly doubt it. Gen. Stanley McChrystal, the top U.S. commander in Afghanistan, banned alcohol at NATO’s International Security Assistance Force headquarters in Kabul, after he noticed coalition officers dozing off at a picnic table.

Now I hope I’m not going too far here, but why were officers taking a nap at a picnic (presumably after drinking alcohol) such an Epiphanal moment for the general? What on earth is wrong with a tired, stressed soldier having a drink and catching a little shuteye while off duty? They weren’t belligerent. They weren’t fighting. They weren’t getting into any mischief. They were taking a nap. And this sight made General McChrystal worried enough that he decided, not to figure out how his soldiers could get the rest they needed, but instead to ban the alcohol that helped them fall asleep. Personally, I’m all for letting them have a beer once in a while. At the very least, they’ve earned it.

There’s a wonderful article today in Germany’s Der Speigel showcasing University of Pennsylvania Archaeologist Patrick McGovern’s theory that alcohol is responsible for nothing short of civilization itself. Titled Alcohol’s Neolithic Origins: Brewing Up a Civilization, the story begins:

Did our Neolithic ancestors turn to agriculture so that they could be sure of a tipple? US Archaeologist Patrick McGovern thinks so. The expert on identifying traces of alcohol in prehistoric sites reckons the thirst for a brew was enough of an incentive to start growing crops.

It turns out the fall of man probably didn’t begin with an apple. More likely, it was a handful of mushy figs that first led humankind astray.

Here is how the story likely began — a prehistoric human picked up some dropped fruit from the ground and popped it unsuspectingly into his or her mouth. The first effect was nothing more than an agreeably bittersweet flavor spreading across the palate. But as alcohol entered the bloodstream, the brain started sending out a new message — whatever that was, I want more of it!

This is nothing new if you’ve been following McGovern and other scientists coming to similar conclusions as new evidence is continually being found to support the idea that it was the desire to brew beer that caused man to settle down and grow crops, leading to civilization’s genesis. But it’s quite nice to see it gaining traction in mainstream media.

McGovern’s latest book, Uncorking the Past: The Quest for Wine, Beer, and Other Alcoholic Beverages, is a fascinating read and I highly recommend it. McGovern is also the scientist that worked with Dogfish Head Brewery to create Midas Touch, Chateau Jiahu, along with their other historically based beers. 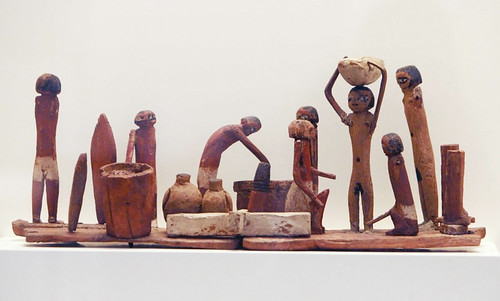 An Egyptian wooden funerary model of a beer brewery in the National Archaeological Museum in Athens.

Palestine’s only brewery, Taybeh Brewery is located in the West Bank town of Ramallah, about 20 miles from Jerusalem. It was started by Nadim Khoury, who became a homebrewer when he lived for a time in Boston, Mass. The British newspaper the Guardian just published an interesting article, Brewed in the West Bank, Drunk in Japan, about Taybeh Brewery and their recent trials and tribulations. 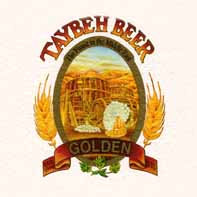 Being a great cynic and skeptic, it’s nice to see a story of hope — er, hops — in the Middle East. Who knows, maybe a homebrewer can bring a resolution to the Israeli/Palestinian stalemate. Peace in our time? Khoury’s comments from the end of the Guardian article are so optimistic it’s hard not to believe beer capable of anything.

“People don’t believe that we have a product like Taybeh beer brewed in Palestine,” he says. “On the news they see only violence, bombing and uprisings. Now we are trying to change this and to show the world we can live in peace with our neighbours. We are human beings. We have a right to enjoy life. Enough is enough with the fighting.”