You are here: Home / Editorial / The Credibility Crisis Of Science Journals

Regular readers will no doubt know how much I hate junk science, especially when it’s used as propaganda by prohibitionist groups to further their agenda. In the ten years since I started the Bulletin (and the 25 years since I’ve been writing about beer) I’ve been watching a growing trend of prohibitionist groups sponsoring questionable “science” and then turning around once they’ve got the conclusion they paid for and trumpeting to the world that science supports their position, which I detailed a couple of years ago Self-Fulfilling Prophecy Propaganda. In some cases, the studies even involved their own staff. I’m sure it was naive to think this is an issue confined to anti-alcohol fanatics, because clearly it’s not. It’s been an education in itself and over the years I’ve gotten much better with How To Spot Bad Science.

The other related issue is that even rigorous studies are often misused as propaganda when they often aren’t as ironclad as the people using them might hope. This practice was detailed in Studies Show Studies Don’t Show Much, which talked about jumping to conclusions too quickly when a study is preliminary, uses a small sample or needs to be reproduced and replicated before anything definitive can be said with certainty. And that, I just learned is a bigger problem for all journal articles, not just the ones I’ve been noticing.

According to Rupert Sheldrake, a British biologist, who writes online at Science Set Free, there is a The Replicability Crisis in Science. By that, he means; “The credibility of science rests on the widespread assumption that results are replicable, and that high standards are maintained by anonymous peer review. These pillars of belief are crumbling. In September 2015, the international scientific journal Nature published a cartoon showing the temple of ‘Robust Science’ in a state of collapse.” 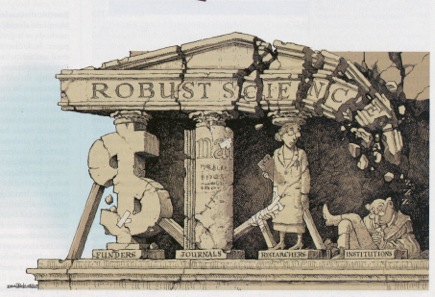 In recent years, countless studies have been found to be faulty, not reproducible, making them all but useless. As other scientists have relied on them, which used to be a reasonable assumption since the journals are peer-reviewed, the science that’s coming after is equally flawed, because it’s based on bad science. And we’re not just talking about a few. “In 2011, German researchers in the drug company Bayer found in an extensive survey that more than 75% of the published findings could not be validated.” It gets worse. “In 2012, scientists at the American drug company Amgen published the results of a study in which they selected 53 key papers deemed to be ‘landmark’ studies and tried to reproduce them. Only 6 (11%) could be confirmed.”

Why is this happening? Sheldrake has a theory.

Unfortunately, personal advancement in the world of science depends on incentives that encourage these questionable research practices. Professional scientists’ career prospects, promotions and grants depend on the number of papers they have published, the number of times they are cited and the prestige of the journals in which they are published. There are therefore powerful incentives for people to publish eye-catching papers with striking positive results. If other researchers cannot replicate the results, this may not be discovered for years, if it is discovered at all, and meanwhile their careers have advanced and the system perpetuates itself. In the world of business, the criteria for success depend on running a successful business, not on whether business plans are ranked highly by business academics, and whether they are often cited in business journals. But status in the world of science depends on publications in scientific journals, rather than on practical effects in the real world.

Meanwhile, the peer-review system is falling into disrepute. The very fact that so many unreliable papers are published shows that the system is not working effectively, and a recent investigation by the American journal Science revealed some shocking results. A member of Science’s staff wrote a spoof paper, riddled with scientific and statistical errors, and sent 304 versions of it to a range of peer-reviewed journals. It was accepted for publication by more than half of them.

This is apparently enough of a problem that it even has its own Wikipedia page, and is known as the Replication Crisis. And Science News had an article entitled Is redoing scientific research the best way to find truth? 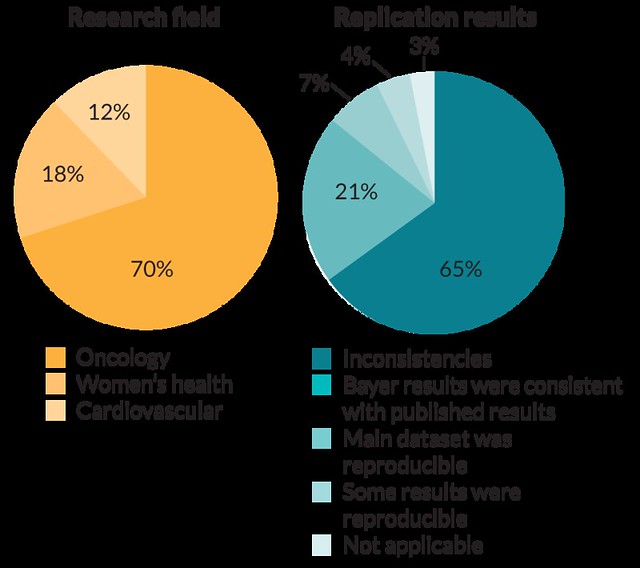 But it’s hard not to see another culprit. Science News also offered 12 reasons research goes wrong, and included “fraud” at the end, stating that “fraud is responsible for only a tiny fraction of results that can’t be replicated.” I suppose that depends on how you define it, and I think I’d say it might include the type of junk science where somebody is hired to find a specific result rather than find out what the result might be in a specific situation. That’s the type I see more and more in the field of alcohol studies being sponsored by prohibitionist groups.

Prohibitionists and other groups have been perverting science for their own ends for years, using it to hoodwink an unsuspecting public, who still trusts the studies they’re reporting, to promote their agenda. It’s become a common tool of propaganda. This is detailed quite well in the classic book How to Lie with Statistics, but even more forcefully in the later expose Trust Us We’re Experts: How Industry Manipulates Science and Gambles with Your Future. It’s unfortunate, but prohibitionist groups aren’t really interested in health or safety. Like almost all non-profits, they’ve become more interested in sustaining themselves, which means raising money has become the real goal. This was revealed with startling clarity at an alcohol policy conference held a couple of years ago, which I reported on in The Neo-Prohibitionist Agenda: Punishment Or Profit. It’s about money. Isn’t it always?

But sadly, science is supposed to be science, and should be free of the entanglements that cloud so many other fields. And once upon a time, I like to kid myself, it probably was. But is it sure seems as corrupt as the rest of the world to me now, and that can’t be good for the present, and especially the future. Because it’s only going to get worse. I’m sure there’s a study somewhere that supports that. And if not, I can always fund my own. Apparently that’s how it’s done.