Happy “Independence Eve” everybody. If you’ve never heard of “Independence Eve,” that’s because Newcastle Brown Ale made it up. But it’s so brilliant, I’m going to start observing it, and maybe even will start a tradition of drinking a British ale every July 3. Perhaps even a Newcastle Brown Ale just to say thanks for this hilarious series of ads.

There’s maybe fifteen ads on YouTube or at the dedicated website Newcastle set up for the promotion: If We Won. The latest is below, though I’d encourage you to go back and watch them all. Here’s the most recent one, and they keep adding news ones every few hours.

And here’s another favorite one, with Britsh comedian and writer Stephen Merchant. There’s also ones with Elizabeth Hurley and Zachary Quinto. You can check out all fifteen (at last count) at Newcastle’s YouTube channel.

AdWeek has a story about the advertising campaign, Newcastle Ambushes July 4 by Inventing ‘Independence Eve,’ Celebrating British Rule The Redcoats Get Revenge. From the article:

British brands, understandably, don’t have much to say around the Fourth of July—until now. Newcastle Brown Ale, among the cheekiest of U.K. marketers, has turned America’s most patriotic holiday to its advantage by inventing a new, completely made-up holiday: Independence Eve on July 3. The idea of the tongue-in-cheek campaign, created by Droga5, is to “honor all things British that Americans gave up when they signed the Declaration of Independence,” Newcastle says.

“Newcastle is a very British beer, and needless to say, it doesn’t sell that well on July 4. So why not establish it as the beer you drink on July 3?” says Charles van Es, senior director of marketing for Heineken USA portfolio brands. “Unlike the Redcoats in the 18th century, we’re picking our battles a little more wisely. By celebrating Independence Eve, we’re taking liberties with America’s liberty to create a new drinking occasion and ensuring freedom on July 4 tastes sweeter than ever.” 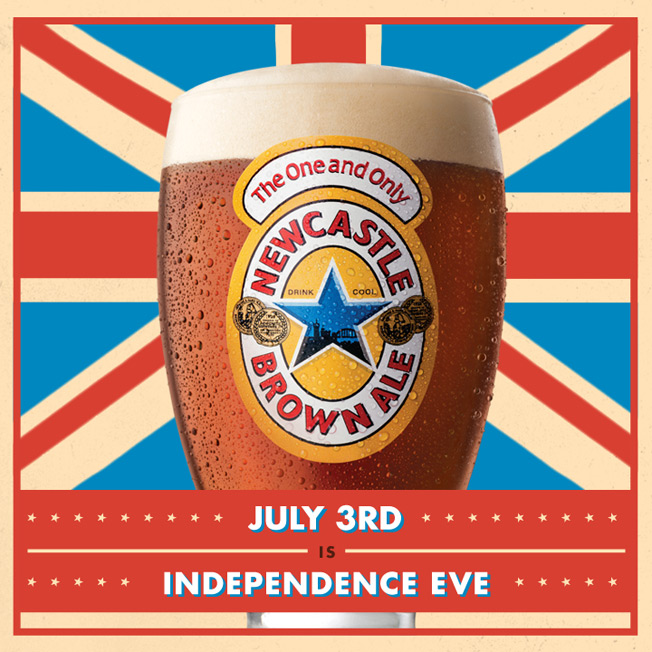 But not to worry, they’re returning to American beer promptly at the stroke of midnight, when it’s no longer Independence Eve, but officially the Fourth of July, and Independence Day.