So I’m watching the Mets beating the Cubs in game 2 of the NLCS and happened to look up as the commercials came on between innings, as I heard something in the voiceover that I wasn’t expecting: Anderson Valley Brewing Company. People in the Bay Area know that PG&E has a P.R. problem after a pipe blew up in a San Bruno neighborhood (on the peninsula north of Silicon Valley and south of San Francisco). The blast registered 1.1 on the Richter scale when a segment of pipe 28 feet long blew out onto the street, thrown about 100 feet and creating a crater 167 feet long and 26 feet wide, killing eight people in the process. They stonewalled after the incident, but eventually the “Public Utilities Commission fined PG&E $1.6 billion,” and there was civil litigation by many of the people directly effected by the explosion.

So for the last few years there’s been a lot of TV commercials portraying PG&E as a company that cares. A lot. A lot of ads, I mean. I don’t know if it’s been a successful campaign or not, certainly I’m not buying it and the fact that they’re still creating new ones and running them frequently suggests that not everyone has been convinced, either. Anyway, the ad I just saw during the baseball game featured Rod DeWitt, who’s the Director of Plant Engineering & Process Control for Anderson Valley Brewing, the drummer for Rolling Boil Blues Band, and an old friend. Here’s the commercial: 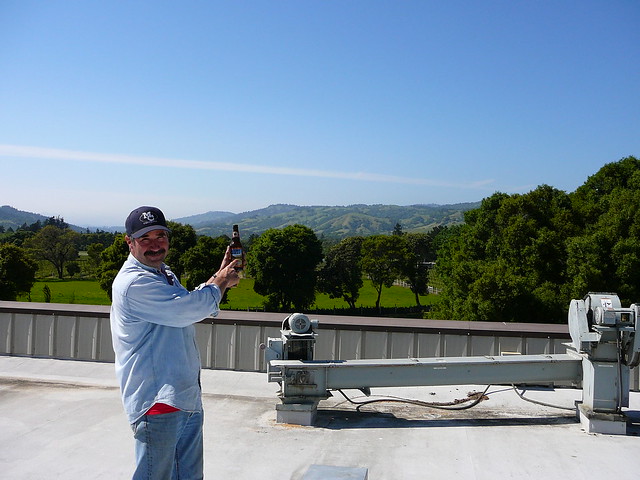 This is the scene shown on every Anderson Valley beer label.