Today in 1965, US Patent 3225510 A was issued, an invention of Robert J. Weichhand and Wickliffe Jones, for their “Article Cartoning Machine.” There’s no Abstract, although in the description it includes this summary:

This invention relates to article packaging and more particularly to a machine for packing beer bottles in conventional six-pack or eight-pack cartons.

More specifically, the machine of this invention is intended for packaging beer bottles in cartons which are formed of paperboard material and which are furnished in a fiat collapsed condition. The collapsed cartons are loaded in stacked formation into a magazine, which includes mechanism for withdrawing the collapsed cartons individually from the lower portion of the magazine subsequently to be erected and loaded. In order to obtain the high loading rate, as indicated above, the bottles, which are fed in a continuous stream, are segregated into groups and the groups advanced into the erected carton from opposite ends. After being loaded with the bottles, liquid adhesive is applied to the flaps of the cartons, then the flaps are folded to a closed position and sealed before the loaded cartons are discharged from the machine.

To perfect a cartoning machine which will handle 600 to 1,200 or more bottles per minute and package them in an automatic manner, the bottles must flow in a substantially straight line continuous movement without any stopping or starting. At the rate of movement of this machine, the inertia of stopping the bottle and starting it again or of jerky acceleration and deceleration would break the bottle or at least scar and tear the paper label. It has thus been an object of this invention to provide a bottle cartoning machine which utilizes smooth acceleration and deceleration substantially straight line continuous flow of the bottles to be packaged and which eliminates abrupt impact reciprocating or oscillating elements which might break the bottle or at least scar the labels upon the bottles. It should be understood that while this machine has been described with reference to packaging bottles, it is equally adaptable to packaging other articles. Of course a machine operable to handle fragile glass is capable of handling metal containers such as beer cans.

The machine includes a series of continuous motion conveyor systems for advancing and erecting cartons after they have been withdrawn individually from the magazine. Thus, the first conveyor apparatus receives the carton blank as it is withdrawn from the bottom of the magazine and includes means for handling the flaps which project outwardly from the opposite open ends of the advancing blank. A first stage conveyor apparatus advances the blank toward a main carton transport conveyor and concurrently partially erects the carton. The partially erected carton is then transferred to a main carton conveyor and during transfer is completely erected by con- Patented Dec. 28, 1965 ice tinuously advancing spacer lugs on the main carton transport conveyor. These lugs coact with the first stage conveyor apparatus to completely erect the carton. The spacer lugs of the main carton conveyor confine the carton firmly in its erected condition and advance it toward the bottle loading zone with the several carton flaps extending outwardly to an open position to avoid any interference of the bottles as they are advanced into the open end of the erected carton.

As the erected carton advances to the loading zone, six cans (or eight cans in the case of an eight-pack) are fed laterally from a pair of parallel bottle conveyors into the opposite ends of the carton by stationary converging guide rails. The bottles are segregated into groups of three each (or four in the case of an eight-pack) and fed into the carton. The segregating mechanism consists of restraining fingers which enter in front of every third bottle. These restraining fingers move at a slower rate than the bottle conveyors so that the restraining fingers slow the movement of the bottles. The down stream finger then releases a group of three which move away from the finger or move downstream at a rate determined by the bottle conveyor which is moving faster than the restrained bottles. As soon as the group of three bottles have moved downstream so as to establish a gap between the restrained bottles and the unrestrained ones, spacer fingers enter the gap so as to maintain the spacing between the now grouped bottles. Guide rails then force the group of bottles across a continuously moving bucket conveyor which maintains the spacing of the groups and into the open sides of the cartons. After the bottles are loaded into the carton, liquid adhesive is supplied to the flaps and the flaps are folded to a closed position and sealed as the carton advances toward the discharge end of the machine.

A further objective of the invention has been to provide an improved segregating mechanism for forming articles into groups while advancing the articles toward a packaging zone where the segregated groups are fed transversely into the open end of an advancing carton. 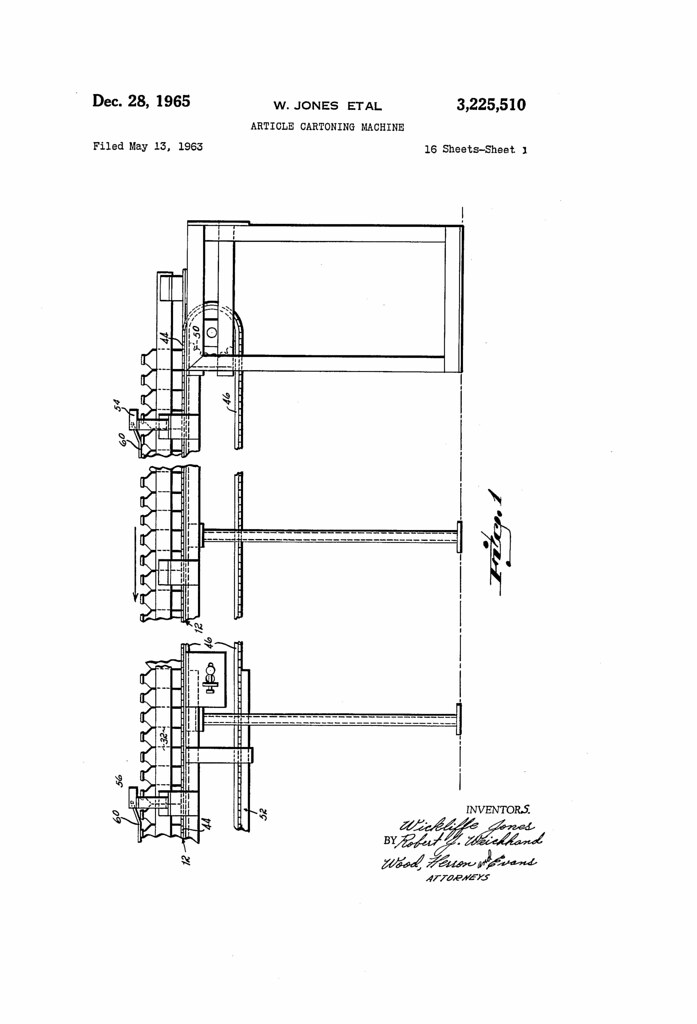 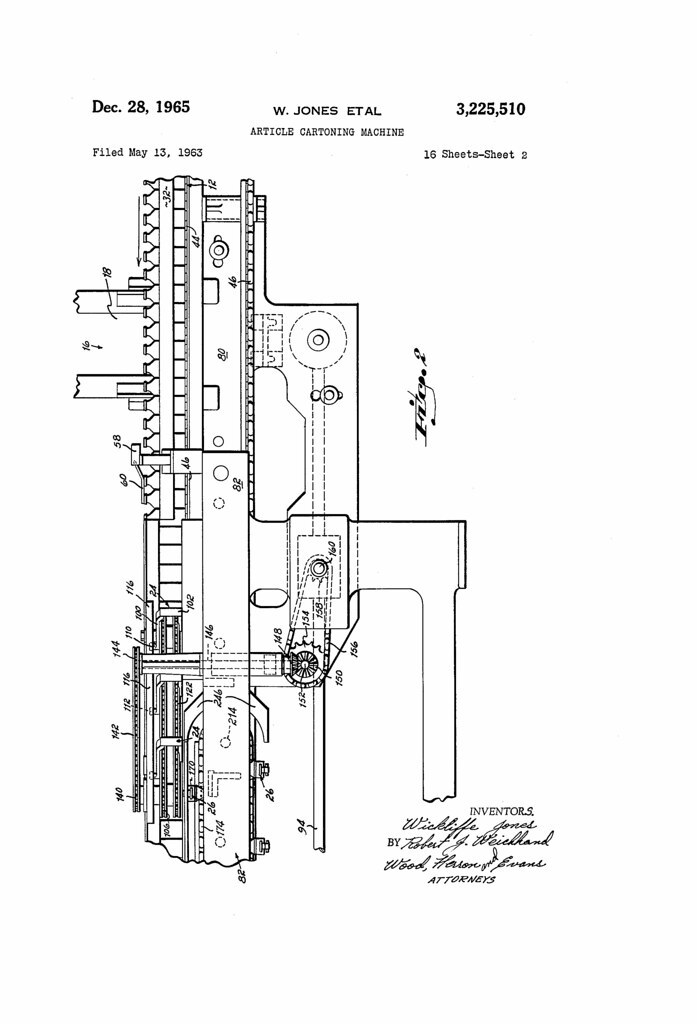 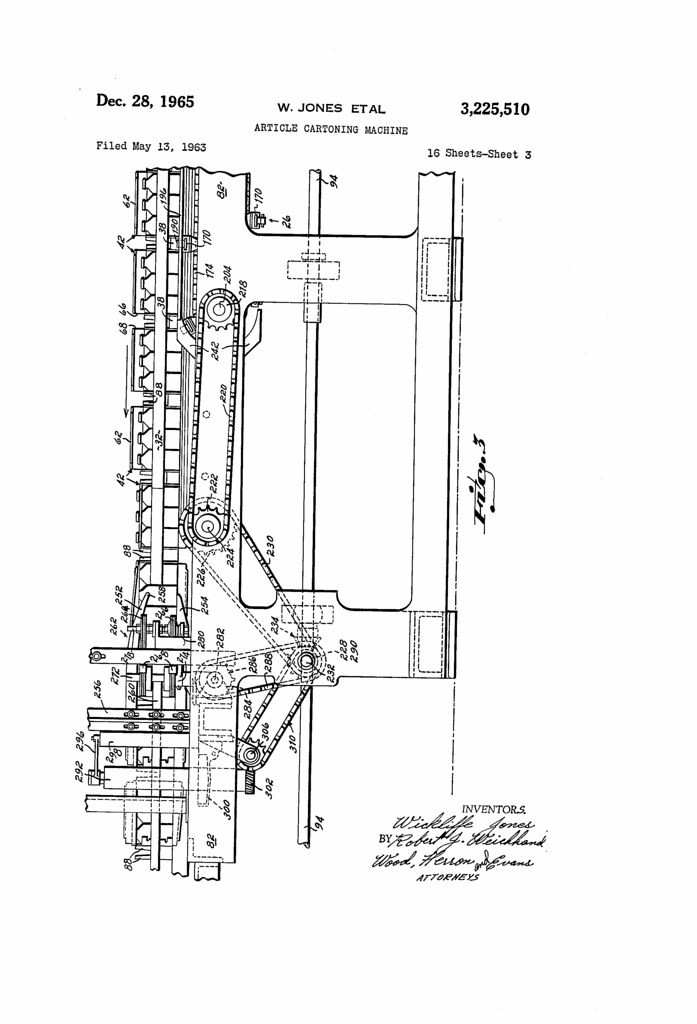 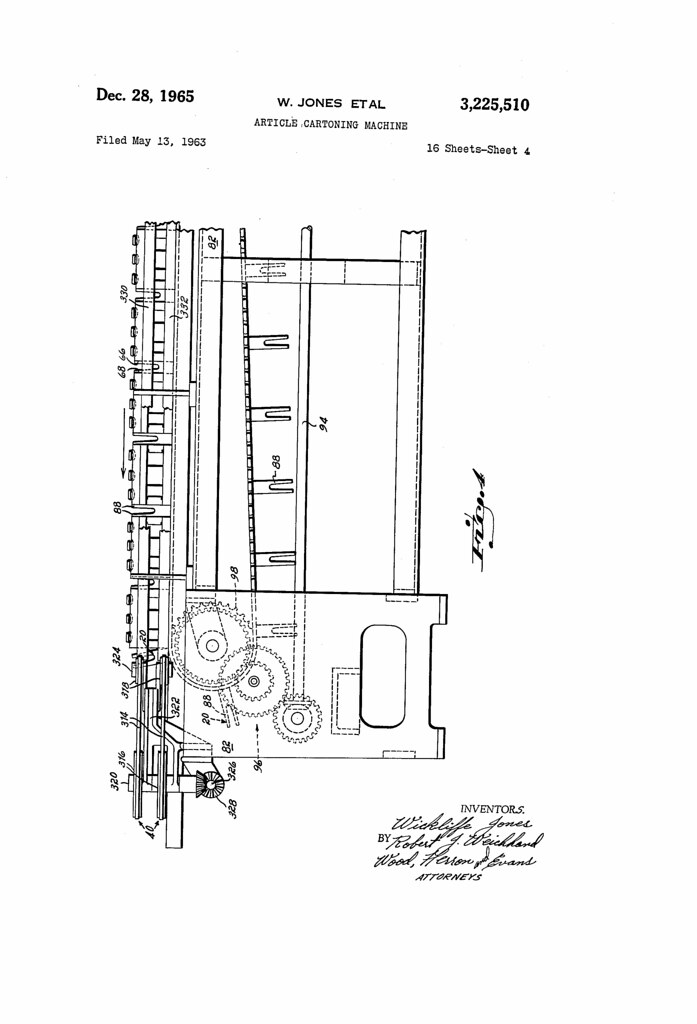 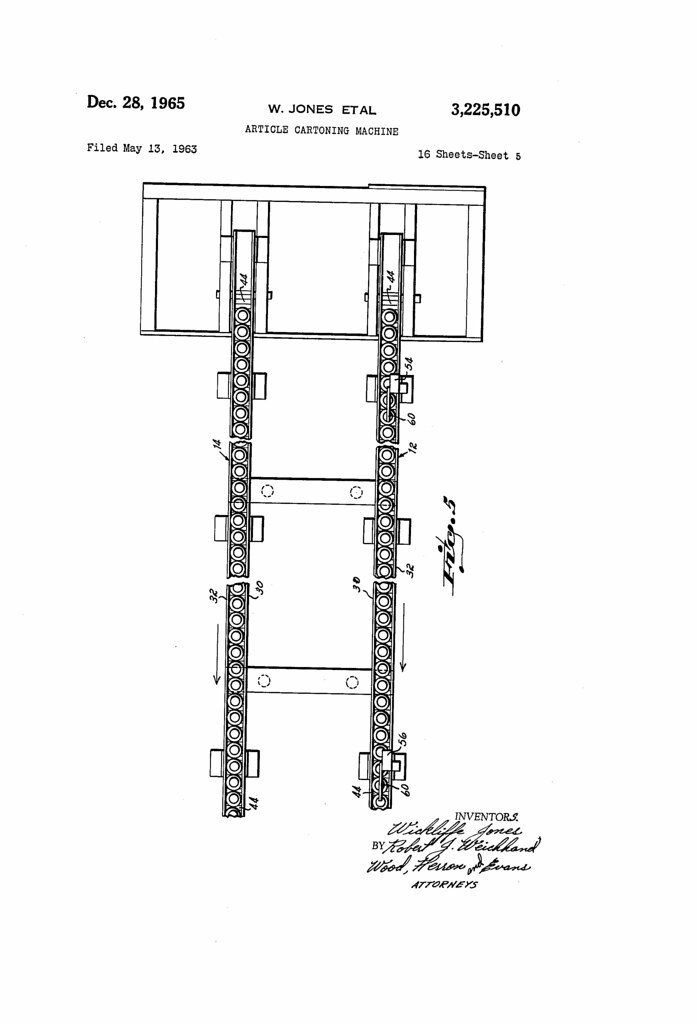 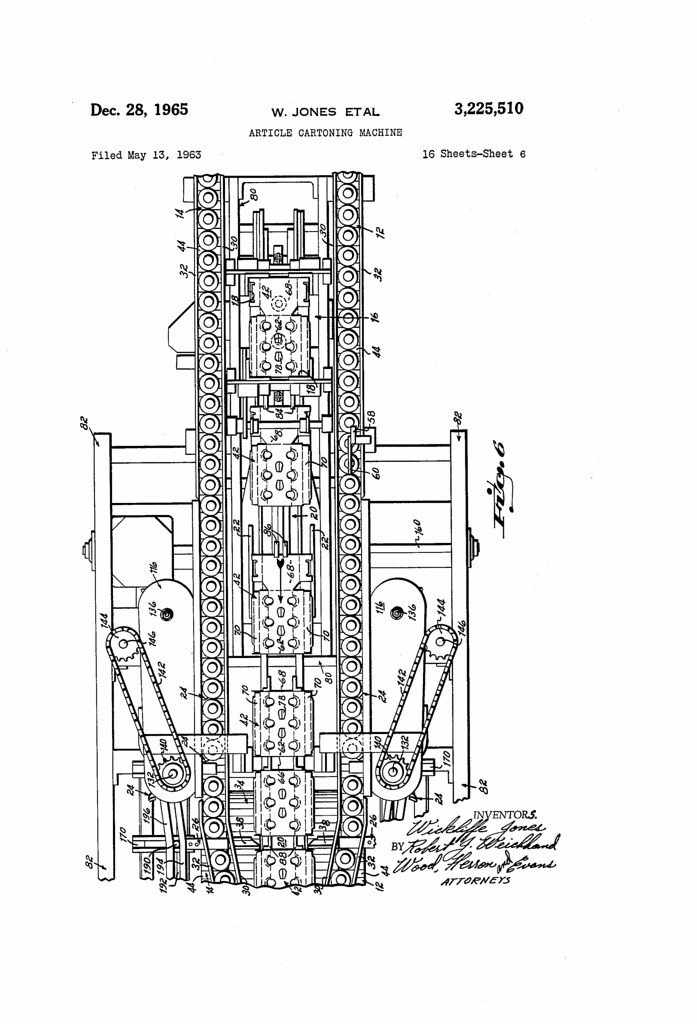 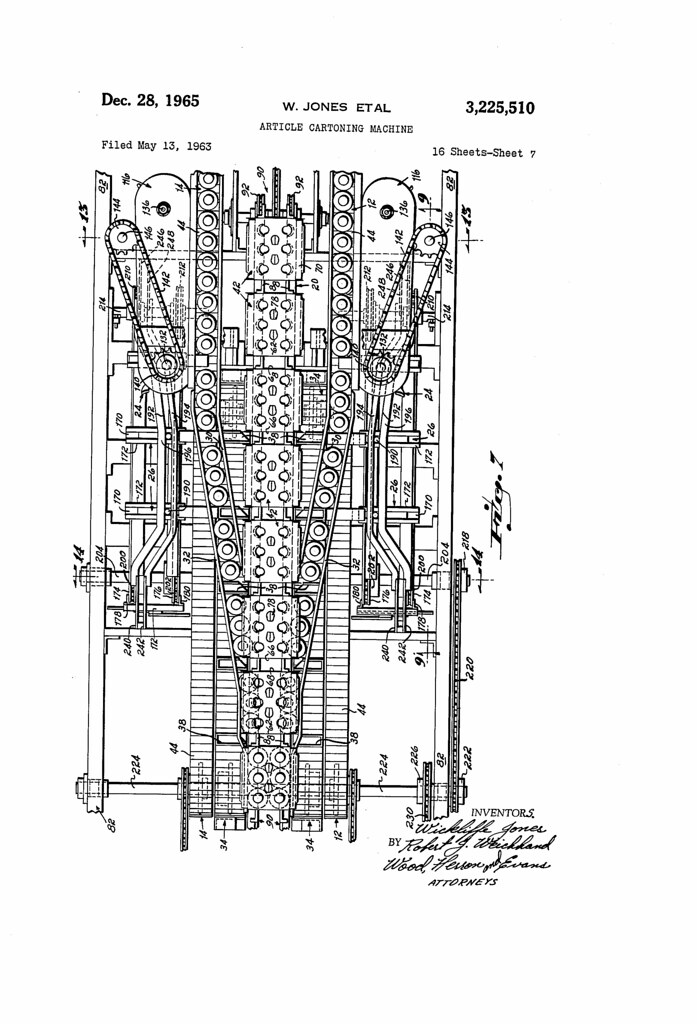 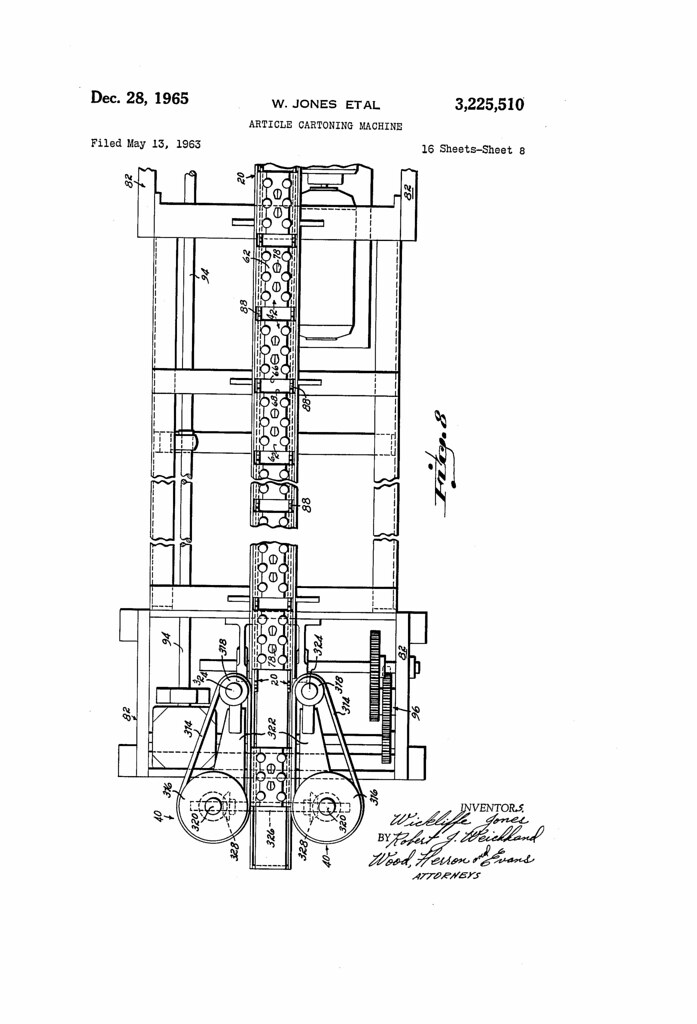 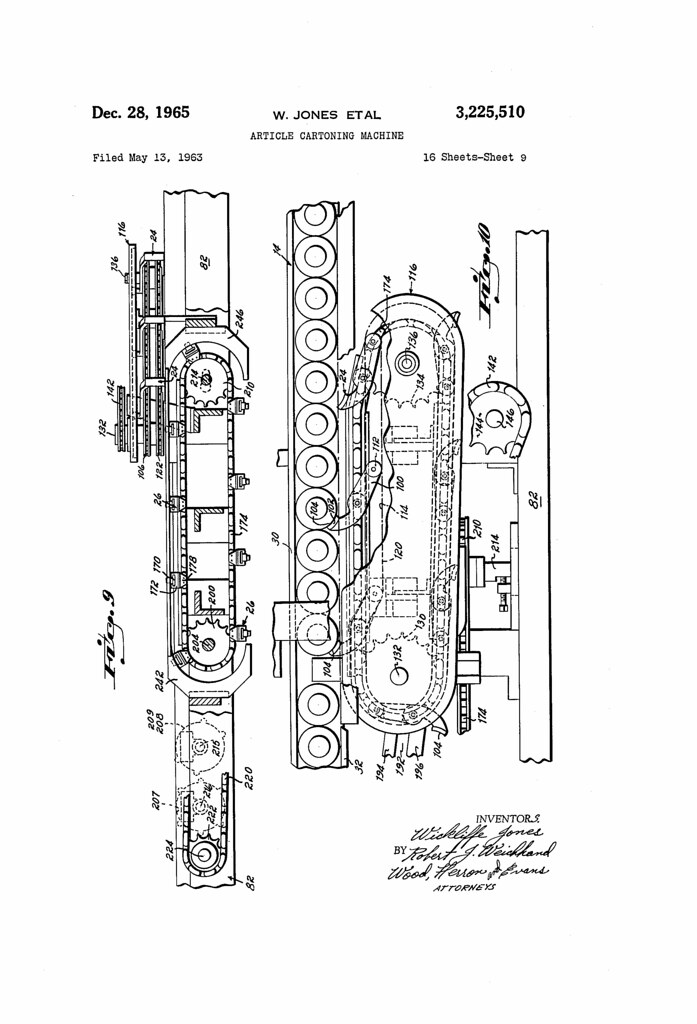 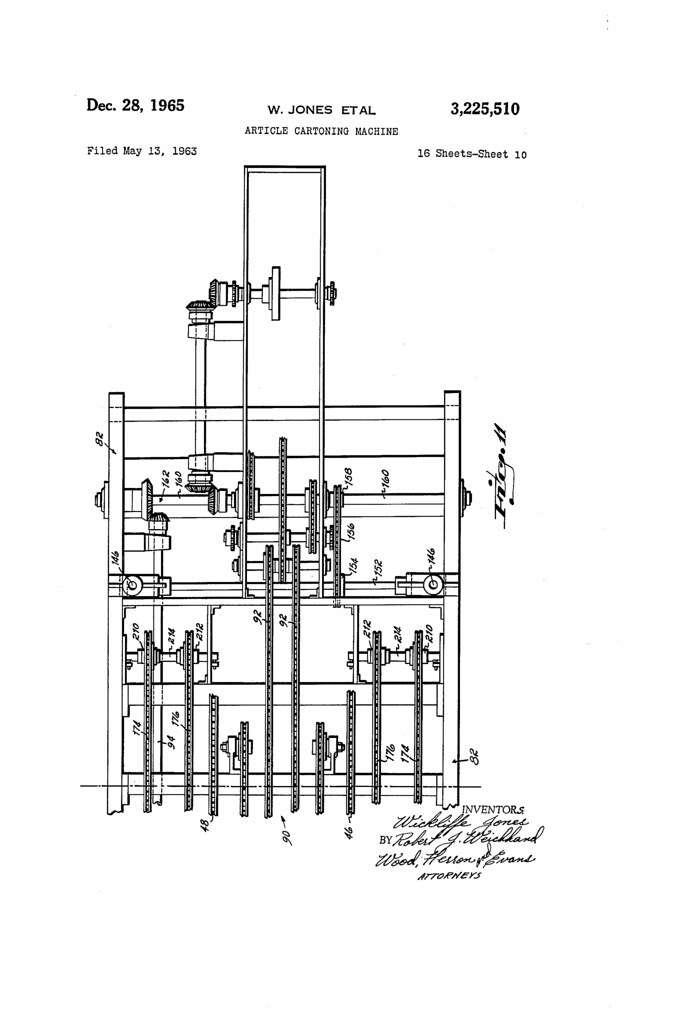 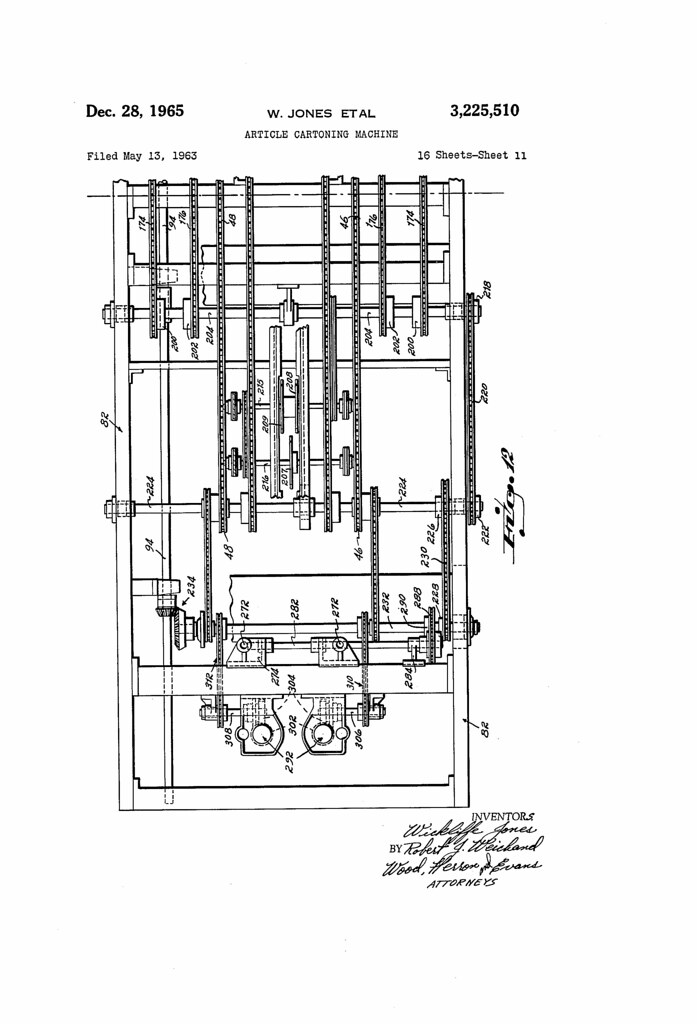 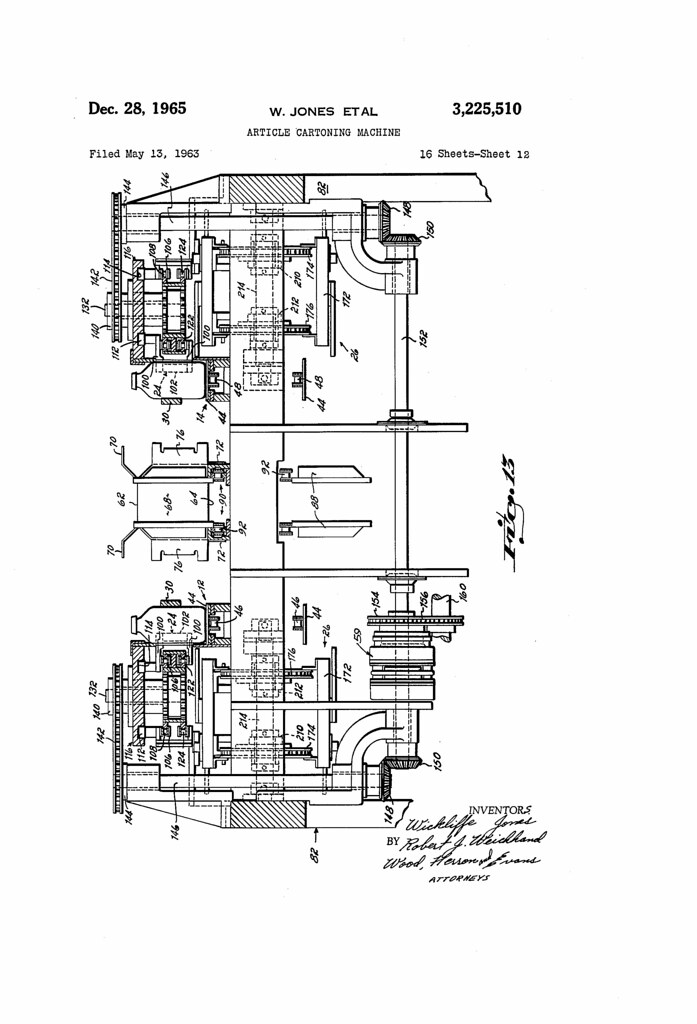 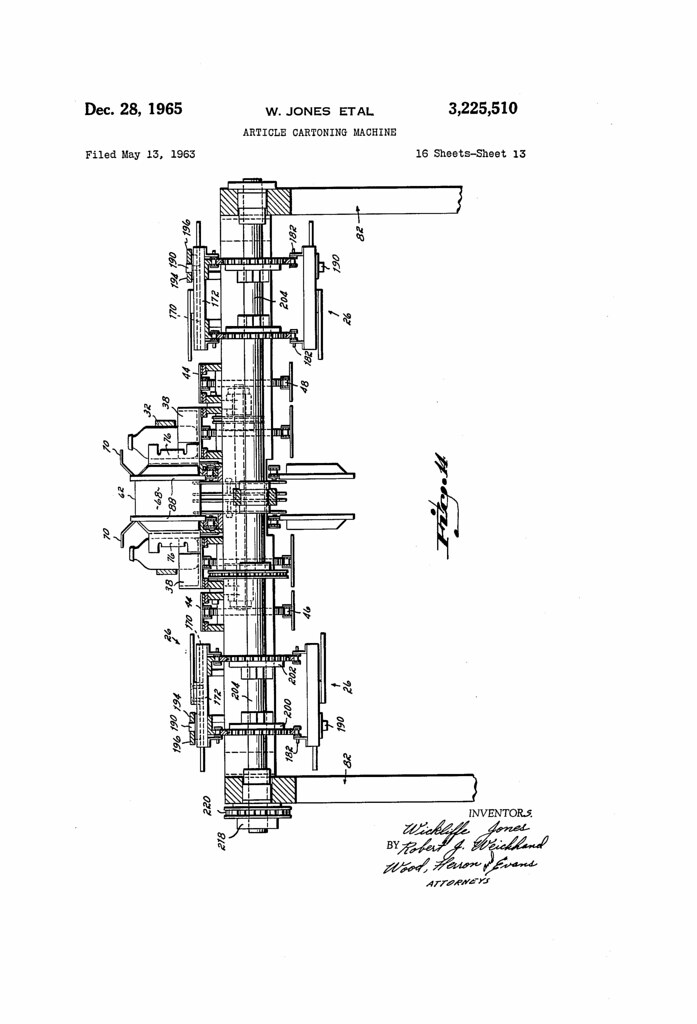 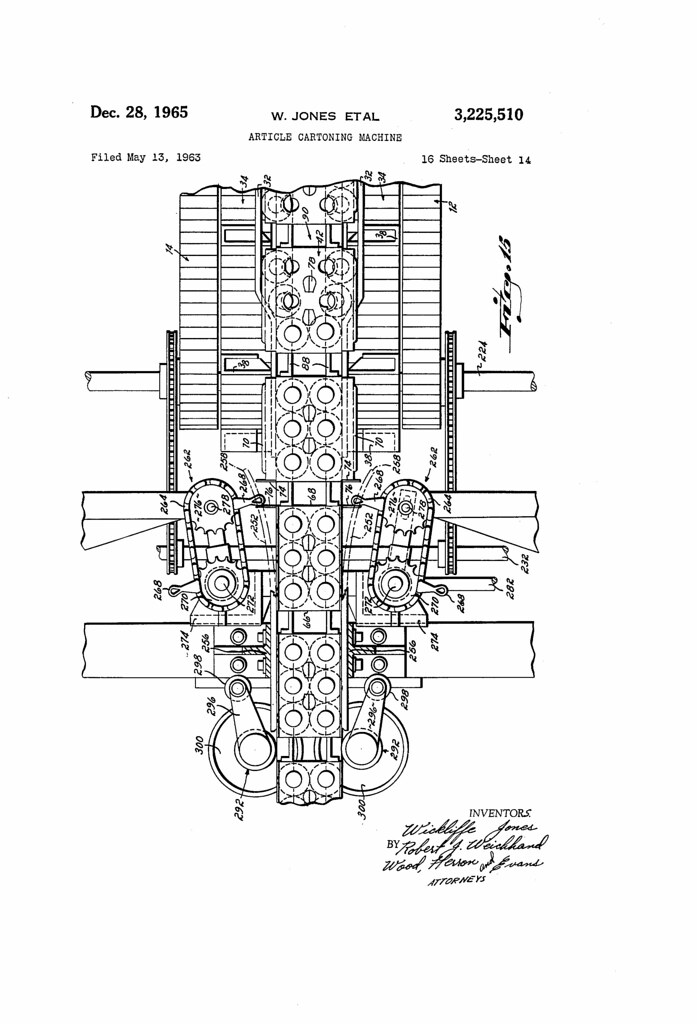 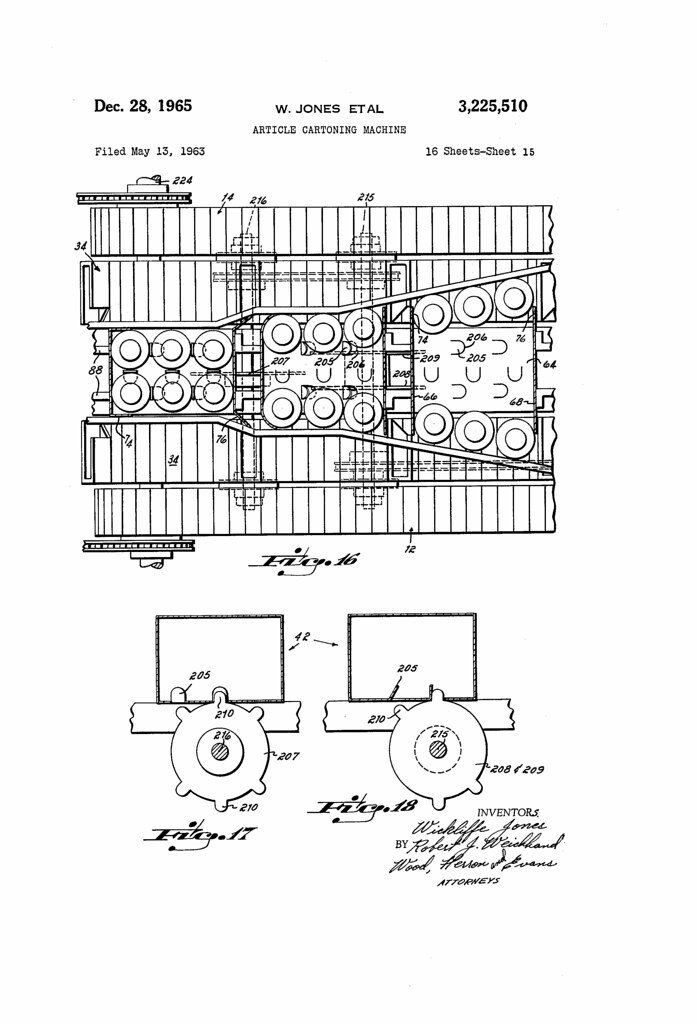