Some very interesting analysis from the NBWA, and their economist Lester Jones, about the number of breweries in America. Lester’s analysis uses slightly different metrics from the TTB and doesn’t define craft breweries as narrowly as the BA, and also the TTB doesn’t distinguish exactly what mat beverages are being made, if they’re licensed as a brewery then they’re included in the data. Those difference in calculating show the NBWA’s number for how many breweries there in America is 4,824, or over 550 more. But even more remarkable is that based on the number of “permitted breweries on record” at the TTB by the end of last year, that number could swell beyond 6,000, which seems absolutely crazy. The number is California alone, at 788, is just shy of 800. Sheesh!

Here’s the entire analysis below since the whole summary is worth reading:

Each year, the NBWA requests data from the TTB on tax paid withdraw volumes by size of brewery. Once again, this year’s TTB data provides some interesting brewing industry insights into the dynamics of the U.S. brewing industry. This data also is helpful for us to supplement the Brewers Association data on overall independent craft beer growth and brewery count. According to the BA, craft brewer volumes grew by 13 percent to 24.5 million barrels in 2015. The BA also reported 4,269 total operating breweries for 2015. As with all statistics, how the numbers are collected and reported can vary across organizations. In our industry, the numbers also change quickly.

As of April 2016, the U.S. domestic brewing industry had 4,824 reporting breweries according to the TTB. As with the BA’s brewery count of 4,269, this number is expected to change as additional new brewers are counted that may not yet have been fully recognized and/or reported by either the TTB or the BA data. The data presented below is for all types of malt beverage manufacturers and recognizes only the individual facility, not the ownership or control group.

Highlights from the 2015 TTB brewery count data include: 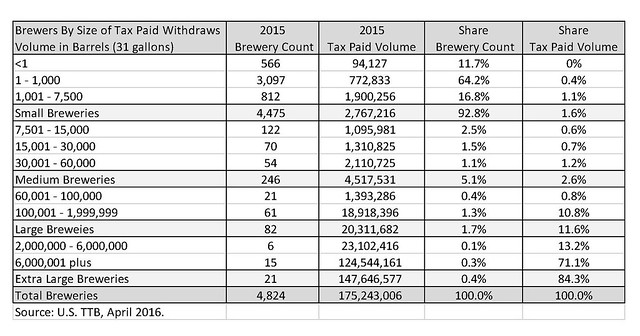 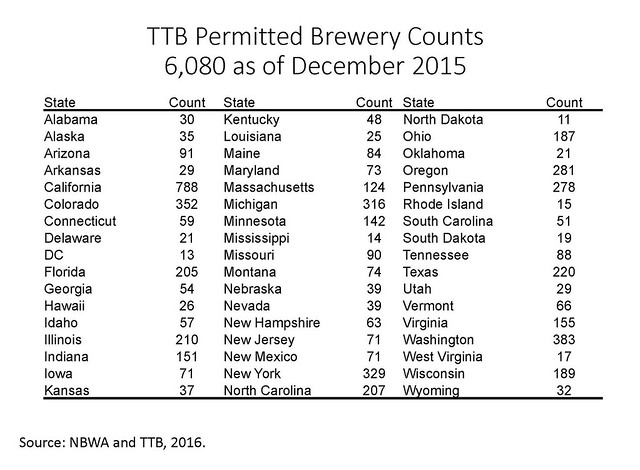 Today in 2013, US Patent 20130314244 A1 was issued, an invention of Steve Hershberger, Steve Kremer, Matt Mayer, and Mark Kosiarek, assigned to SteadyServ Technologies, LLC, for their “Draft Beer Supply Chain Systems and Methods.” Here’s the Abstract:

Supply chain systems and methods are disclosed for monitoring fluid levels in liquid containers, such as kegs. Embodiments include sensors that fit within a keg’s false bottom, measure the weight of the keg, and transmit the weight information to a computer database via a wireless network. Other embodiments include an RFID device with information about a characteristic of the liquid within a keg (such as brand and/or type of beer) that may be attached to the keg and paired with the sensor so the sensor can transmit information about the characteristic of the liquid in the keg. In alternate embodiments, the sensor’s transmitter is short range and an uplink/gateway is used to receive information from the sensor and relay that sensor’s information to a broader wireless network. Multiple containers in close proximity may each be fitted with an RFID device and sensor and communicate their individual information to the database. 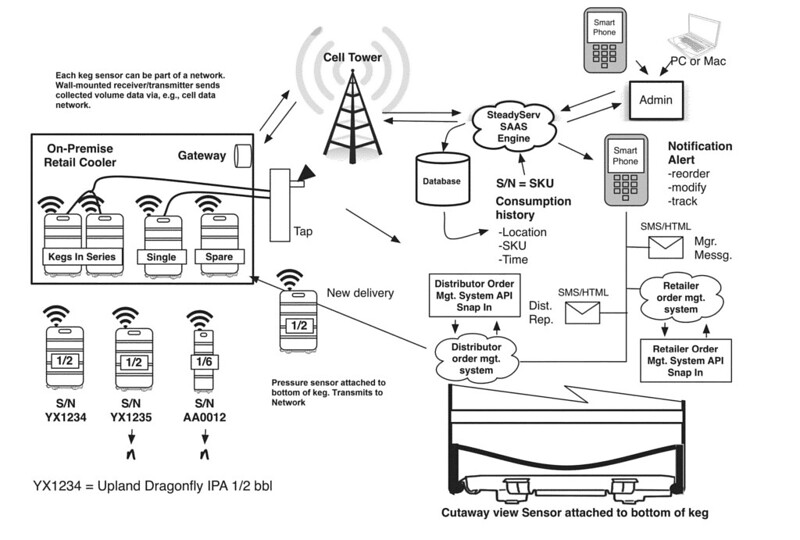 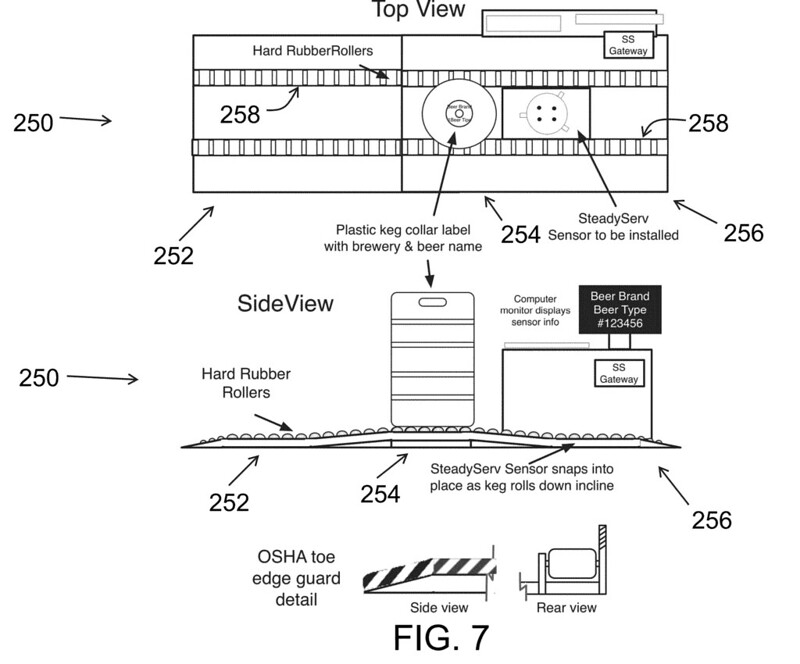 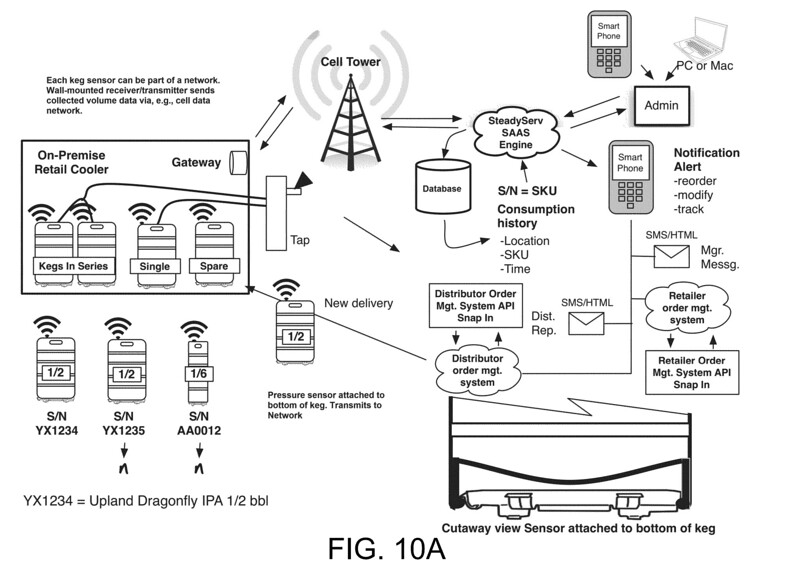 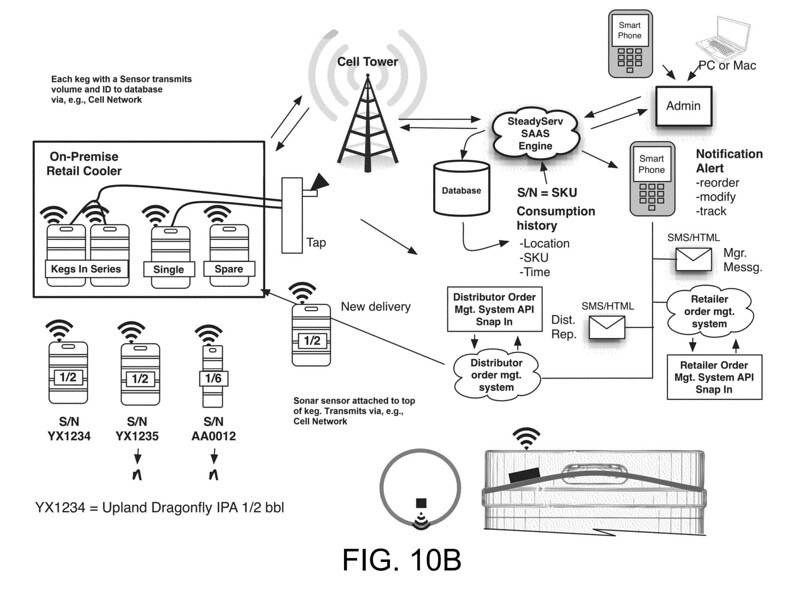 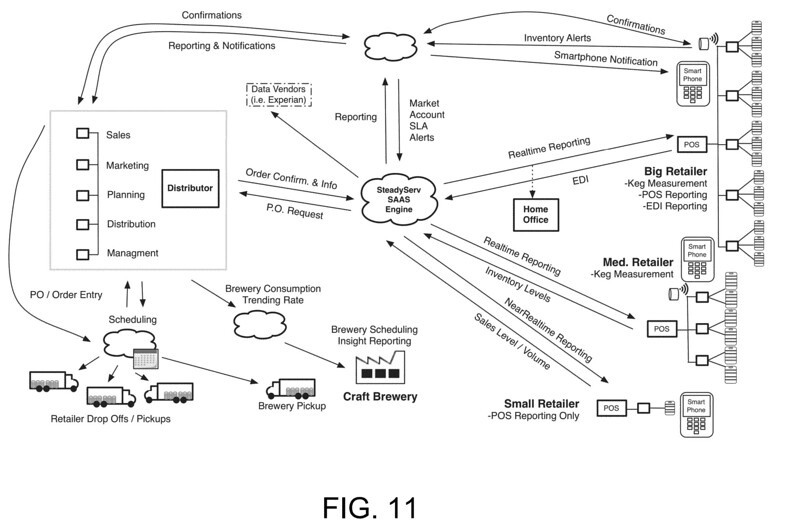 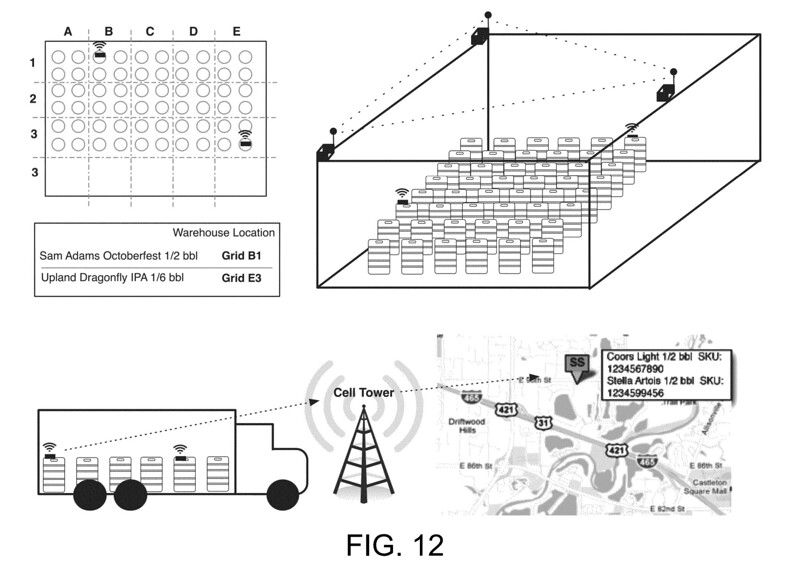 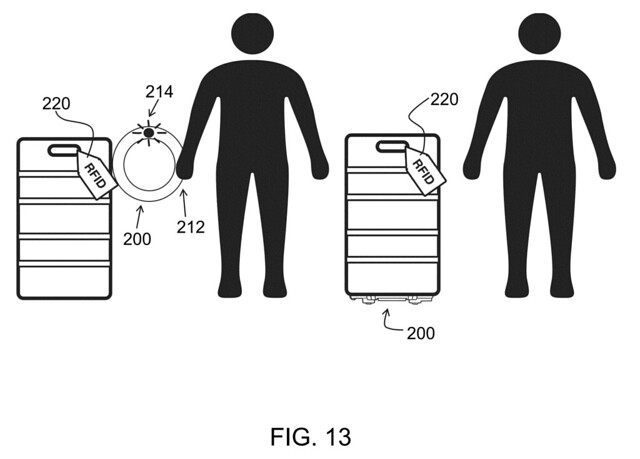 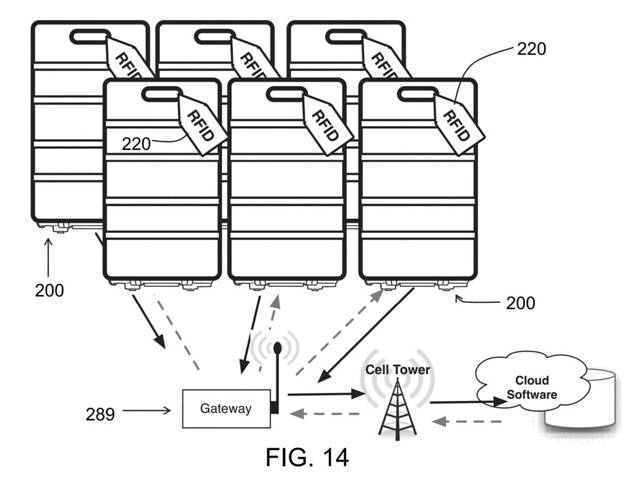 They tried this last year, unsuccessfully, but the neo-prohibitionists are nothing if not incessant. So it’s now been introduced again. City of San Francisco Supervisor John Avalos has introduced the “Alcohol Mitigation Fee Ordinance” (AMFO) in an effort to impose a “fee” (which is technically different from a “tax” since that would be illegal) on alcohol sold in the city. They can call it a “fee” or anything they like if that makes it legal and presumably keeps their conscious clear, but a tax is defined as “a compulsory contribution to state revenue, levied by the government on personal income and business profits or added to the cost of some goods, services, and transactions.” [Oxford Dictionary of English.] If it walks and talks like a duck, guess what it is? It’s complete and utter bullshit, not to mince words.

The stated rationale is that the “fee” is meant to cover the so-called harm caused by people who use alcohol by charging a fee to the distributors and retailers who sell it. For support of that idea, they cite studies that are nowhere near impartial. Essentially they just shopped for the studies that said what they wanted, ignored those that contradicted them, and used that to “prove” their case.

If passed, the AMFO would add a fee of $0.076 to every ounce of alcohol sold in San Francisco. So if I understand that correctly, for a 12-oz. bottle of beer that would be an additional 91.2 cents and for a pint another 121.6 cents, or roughly $1.22. And that fee will imposed at the wholesale level, and the distributors will then naturally mark-up the fee, and so will the retailers, meaning in reality the price of a pint will go up at least a dollar and a half, possibly more. The Marin Institute, who’s really behind this fee, is selling this idea as a “nickel-a-drink” because they’ve found that it polls well with consumers who see no problem with an extra nickel. But as is so typical with the Marin Institute, their “nickel-a-drink” propaganda is just another one of their numerous lies.

Earlier versions of the proposed ordinance used the term “ethanol ounce” presumably to equalize the alcohol content in different types of drinks, like spirits and wine which usually have higher alcohol percentages. The latest version appears to have dropped that, meaning that the fee on beer would be proportionally much, much higher than spirits or wine.

Where this whole idea came from is the despicable Marin Institute, an organization as anti-alcohol as one could imagine. They’ve been pushing this “fee” idea and using the rhetoric about “charge for harm,” which may sound good on paper but it’s entirely unfair to ordinary casual drinkers, which constitute the vast majority who drink alcohol. The Marin Institute claims that “Big Alcohol [should be] accountable for the tremendous harm its products cause. Appropriately taxing alcohol in each state and at the federal level will help reduce over-consumption, as well as provide much-needed funds for prevention and health care.” They hardly even say why that should be the case, so sure are they that people will just swallow that idea without thinking about it. But let’s think about it anyway.

Do the products actually cause any harm or do some people abusing the products cause the harm? Obviously, it’s not the alcohol itself, but its misuse that causes any trouble. If those people who abuse alcohol are straining the health and police resources of San Francisco, then the city should charge them. But saying that the alcohol those people abused should foot the bill is prima facie ridiculous. We don’t charge soda companies for all the unhealthy people that result from drinking pop, or red meat, or any other unhealthy foods that make unhealthy people thus placing a greater burden on our health care system. We don’t charge parachute companies or other extreme sports equipment manufacturers for increased use of emergency room facilities that are disproportionally called upon by extreme sports enthusiasts when “accidents” happen. We don’t put a tax on motorcycle purchases even though its more likely that a motorcycle rider will be involved in an accident, and/or that their accident will likely be more serious than if that accident occurred while driving a car, thus placing a greater burden on our healthcare system. I could go on and on. The point is that it’s absurd that alcohol companies should be responsible for any harm that an adult drinking one of their products might cause to himself or someone else. But the neo-prohibitionists keep on making that argument, regardless of how specious it is.

Even assuming their assertion that there is any “harm its products cause,” it’s still not everybody who drinks alcohol. This “fee” punishes everyone who drinks because it raises the price for everybody across the board. That means that the 99% of adults who drink responsibly and don’t place an undue burden on the city’s resources are forced to pay for the 1% that might. And yet the Marin Institute has no problem saying that’s not only fair, but how the world ought to be. According to them, alcohol has to pay for any harm someone who drinks it may cause, but every other product in the world does not. Why? Obviously, it’s not remotely about fairness or even funding healthcare for people who need it. It’s about punishing alcohol manufacturers and consumers who drink it in any way they can think of. They also claim that others states have similar policies in place, as if that makes it right, but then contradict themselves in their press release by stating that if passed, the “San Francisco alcohol mitigation fee will be the nation’s first local ‘charge for alcohol harm’ program, expanding on traditional nuisance and enforcement laws.”

What will this do to San Francisco’s business should it cost 30%+ more for a drink (or at least $1.25 and possibly as much as $2 more per pint) in the city versus the surrounding big cities like Oakland or San Jose? I think they’ll lose convention revenue, not to mention the nighttime and weekend influx from the Bay Area to the city. And tourism could take a hit, too. Not that any of those concerns are remotely part of the Marin Institute’s list of things they care about. How, or why, they cozied up to Supervisor John Avalos remains a mystery. He, at least, should care about what this might do to San Francisco’s economy. And don’t forget this is a test case. If it works and San Francisco does impose this “fee,” you can bet it will be tried in every metropolitan area where the neo-prohibitionists have a “friend” in local government. Alcohol is already the most taxed consumer good on the market today, but the wingnuts at the Marin Institute won’t rest until it’s taxed out of existence entirely. Yesterday, they took one more step closer toward realizing that goal.

Be afraid, be very afraid….