Tuesday’s ad is for Heineken, from the 1970s. In the later 1970s, Heineken embarked on a series of ads with the tagline “Heineken Refreshes the Parts Other Beers Cannot Reach.” Many of the ads were in a sequential panel, or comic strip, format and they were intended to be humorous.

In this ad, a two-panel vertical format, the Mother Goose character Humpty Dumpty has already had his great fall, and is sitting on the grass beneath the wall he’s just fallen from with cracked noggin. He looks like he’s in pretty bad shape. And while “[a]ll the king’s horses and all the king’s men, couldn’t put Humpty together again,” one sip from a mug of Heineken and he’s good as gold, right as rain and fit as a fiddle. He’s even back on his wall, with a smile on the face of his now intact body, with a blue sky at his back. That’s some damn powerful beer. 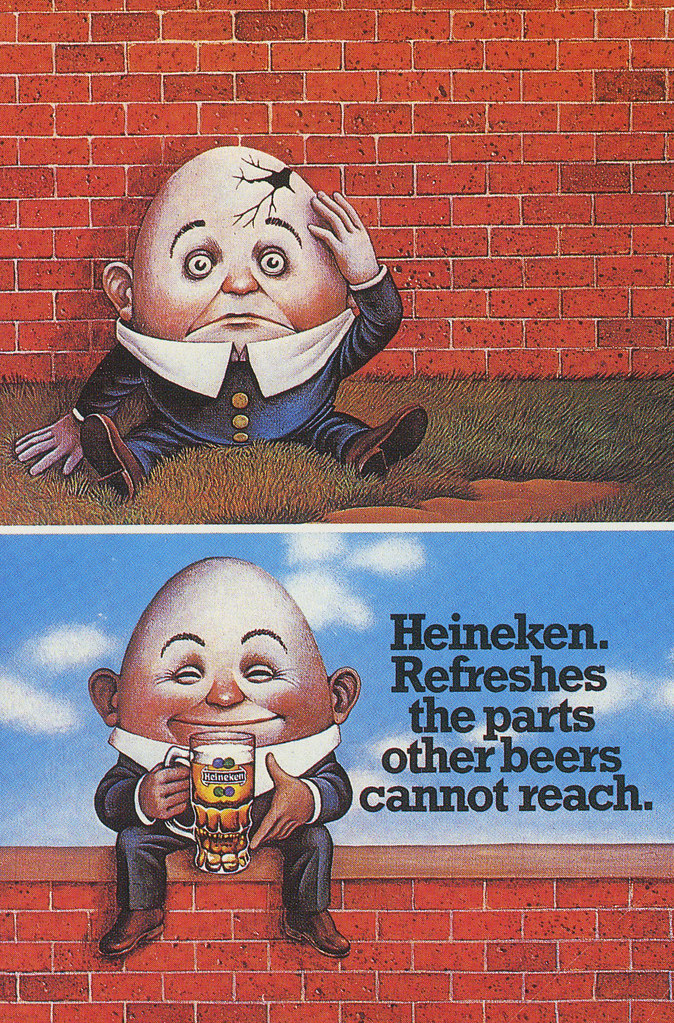 Today is the birthday of Danish author Hans Christian Andersen (april 2, 1805-August 4, 1875). Although he wrote numerous plays, travelogues, novels, and poems, Andersen is best known for his fairy tales, like the Little Mermaid, the Emperor’s New Clothes, the Ugly Duckling and the Snow Queen, which was loosely adapted into Disney’s Frozen in 2013. Those are just the highlights, he also wrote many more you’ve probably heard of and undoubtedly quite a bit more you haven’t. One of those lesser known stories is “Ole, The Watchman of the Tower” or “Ole the Tower-Keeper.” It was written in the 1850s and was included as part of his third collection of “New Fairy-Tales and Stories,” which was published in 1859.

It was from this short tale that Boulevard Brewing of Kansas City, Missouri, was inspired to create their Quadrupel (although they also refer to it as a “Belgian Dark Strong Ale”), The Sixth Glass. 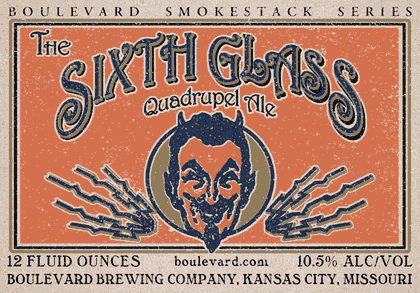 Here’s a synopsis of the story of Ole:

There was a man named Ole who was rumored to be the child of several different people and had been said to have done many interesting things in his life. As time wore on, he became less than enthused with society and decided to become a hermit.

He lived in a church tower because it was the only place where he could easily get bread and still be away from other people. He read books and had visitors around New Years. One person in particular visited him each year around New Years and that person had three stories to tell that Ole had told him. 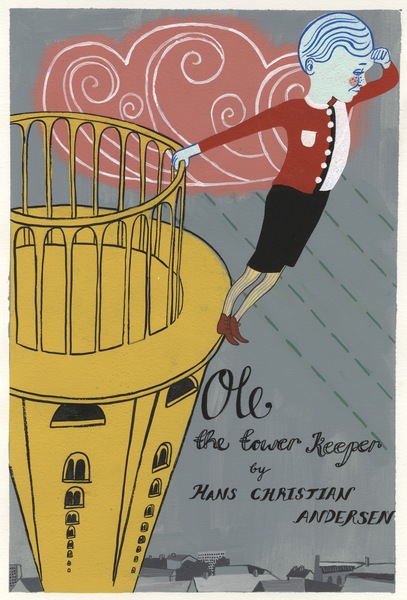 And here’s another, shorter, one:

Our first-person narrator tells us that he likes to visit a watchman of a tower named Ole. He visits twice on New Year’s Eve and hears some kooky stories about cobblestone, the Bible, and alcohol.

But it was during the end of his second of three nights that Ole visited and listened to the Tower-Keeper, after he’d explained about the first five glasses, who was in them, or how they would change you, he told Ole about the sixth glass:

“The sixth glass! Yes, in that glass sits a demon, in the form of a little, well dressed, attractive and very fascinating man, who thoroughly understands you, agrees with you in everything, and becomes quite a second self to you. He has a lantern with him, to give you light as he accompanies you home. There is an old legend about a saint who was allowed to choose one of the seven deadly sins, and who accordingly chose drunkenness, which appeared to him the least, but which led him to commit all the other six. The man’s blood is mingled with that of the demon. It is the sixth glass, and with that the germ of all evil shoots up within us; and each one grows up with a strength like that of the grains of mustard-seed, and shoots up into a tree, and spreads over the whole world: and most people have no choice but to go into the oven, to be re-cast in a new form.

That’s why there’s a devilish demon on the label, because that’s what’s in the bottle, too. Drink it at your own peril. Don’t say you haven’t been warned. Frankly, it only make me want to drink it even more. I love the idea that after reading that passage, founder John McDonald and/or brewmaster Steven Pauwels, were inspired to create a beer fitting that description. 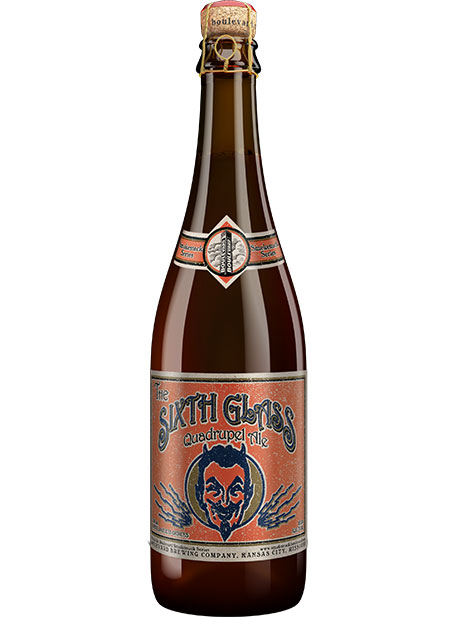 You just can’t make this stuff up. In southern Africa, two dam projects were in danger of being thwarted by … mermaids. According to the Weird Wide Web, the “mermaids had harassed workers installing water pumps at a dam near the small town of Gokwe, in northern Zimbabwe, according to local media reports.” And similar reports came from a project at the “Osborne Dam, near Mutare in the country’s east.”

“Water resources minister Samuel Sipepa Nkomo told a Senate committee last week that work on the pumps at Gokwe dam had stopped after terrified workers complained of machines breaking down under mysterious circumstances, and blamed mermaids, the state-run Herald newspaper reported.” Nkomo suggested that traditional rituals be performed at both dam sites, and that apparently included the use of “traditionally brewed beer, to rid them of the mermaid menace.” And apparently it did the trick. The “mermaid-plagued dam in Zimbabwe is up and working after traditional healers brewed beer to appease the mischievous water spirits.” Who knew?