Saturday’s ad is for Molson, from 1994. The ad shows a great cartoon of — what is that? — a Canadian Goose wearing shades and leaning up against a giant bottle of Molson on the beach. He also has a fairly large bottle on his hand. He actually looks more like a duck, but Canadian Goose makes more sense in context. Whatever bird, he certainly looks satisfied. 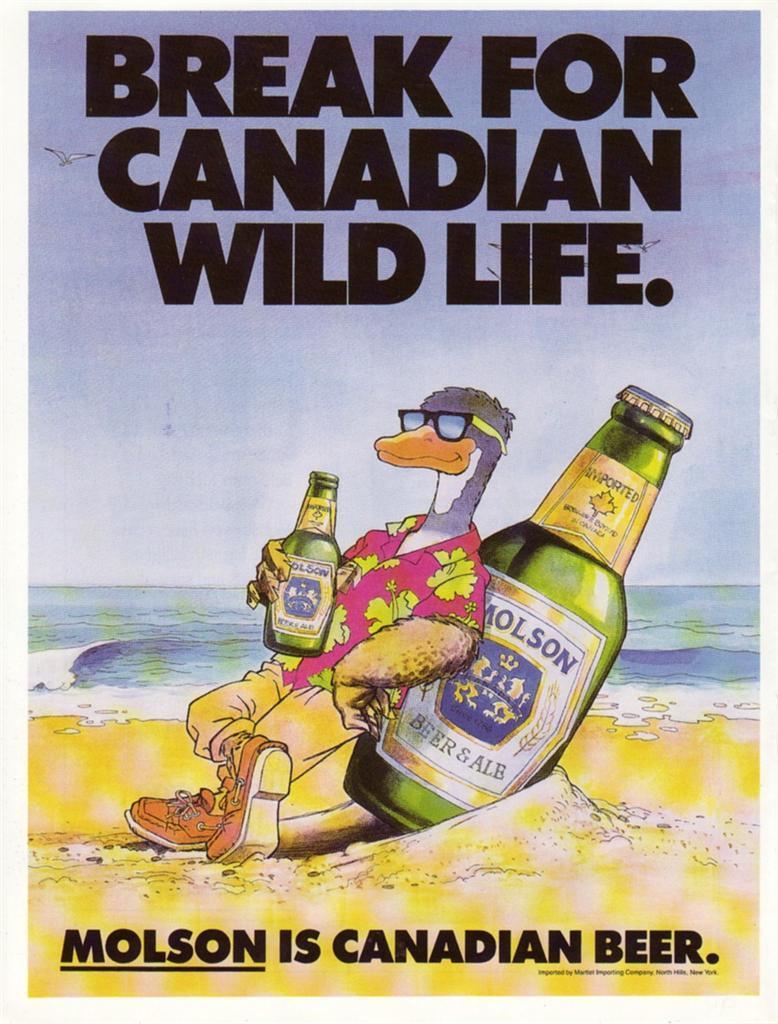 Today is Labor Day, not only in the U.S., but in Canada, as well. So today’s infographic is entitled Beer: Canada’s Drink of Summer, and was created by Molson Canadian. Naturally it focuses on Molson’s beer, but also includes some overall statistics about beer in Canada.

Here’s another fun video, this one from Canada’s Molson Beer. The Canadian National Canthem features the Canadian national anthem — O Canada — performed on various contraptions made with beer cans, bottles and crowns. Enjoy.

According to the Publican, next year MolsonCoors will launch a line of beer aimed specifically at the female market.

Molson Coors is to have another crack at the female beer drinking market next year with the UK roll-out of a range of products that it hopes will appeal to women.

Mark Hunter, chief executive of the UK arm of the global brewing behemoth, said today that the range had undergone more than a year’s worth of research, including a series of trials with numerous focus groups, and was ready for sign off before Christmas.

“This won’t be just about launching a beer aimed exclusively at the female drinker,” he said, although with 60 per cent of women admitting to not drinking beer he added he was encouraged to go after some of that potential customer base.

The soon-to-be launched beers, details of which have yet to be revealed, will be partnered with special glassware designed by fashion guru Amy Molyneaux, with goblets made of black glass, embossed with gold lettering.

Hunter said the range evolved from the Bittersweet Partnership, a strategy created by the brewer to help broaden beer’s appeal.

I don’t know why big companies keep doing this, as they seem to miss the point entirely. First, they emphasize the packaging — it’s always about the packaging and rarely about what’s inside of it — and that just feels foolish.

They also seem to always make beer aimed at women lower in alcohol. But isn’t the stereotype that women prefer wine to beer? And wine is three times stronger than the average English beer, so what am I missing? My wife loves barley wine, and many other stronger styles. She hates low-calorie beer because it tastes of nothing. She wants, like all of us really, flavor. And I can’t see how that’s a gender issue.

My son Porter has been train obsessed since he could express a preference, so I’ve watched a lot — I mean a lot — of train videos. I remember in one the story about how Lionel, the toy train company, a number of years ago came out with a pink train engine, with all pastel cars, to appeal to girls, hoping to pull more of them into the hobby. It was, of course, a miserable failure because the girls who liked toy trains wanted authentic-looking ones, not pink trains that some marketing “expert” thought she would like. And that’s how I see beer. Pandering to women with something you think they’ll like, no matter how many focus groups you conduct, seems like the wrong approach on so many levels.

To me, the fact that women don’t drink beer has more to do with the male-leaning marketing that the big companies have been doing their entire lives. That pandering I have to believe has left them feeling like beer is not aimed at them and is not for them. Pandering to them now with a pink beer in the hopes of undoing decades of stereotyping seems doomed to fail.

The other common stereotype is that beer is too bitter for many women. Again, I think that’s due to stereotypes, too, but this time of the beer itself. I hate to keep going back to Mrs. Brookston Beer Bulletin, but hers is a story I know only too well. When we first met, she drank Natural Light and knew precious little — nothing, really — about beer. The first thing we did together, before I even asked her out on our first date, was go to a brewpub where I ordered her a sampler of the beers they offered. I tasted her through the range of beers, talking about each one, and explaining the differences, the history, how they were made, etc. Not only was she very open and responsive, but she loved them. In fact, she’s never looked back and has been a lifelong lover of good beer from that point to today, some 16 or so years later. And I’ve heard similar stories from people over the years, too. That leads me to believe that the stereotypes heaped on women about why they don’t like beer are, for the most part, pure horseshit. But alcohol companies continue to treat them as gospel and make business decisions as if they really were true.

Carlsberg is also currently testing their own female-friendly beer, Cardinal Eve, or just Eve, from their Swiss brewery, Feldschlösschen Beverages. According to the press kit, there are four flavored beers — lychee, passion fruit, peach and grapefruit — at 3.1% a.b.v. Frankly, those sound like they’re treading dangerously into wine cooler or alcopop territory.

Since I know dozens, perhaps hundreds, of women who love beer — and I see thousands more all the time — it’s hard to take seriously this notion that women don’t like beer. I continue to think the reason that more women (that is more, from a purely business point of view) don’t drink beer is a self-inflicted wound by the big beer companies that they’re now trying to figure out how to undo without losing their core marketing techniques involving sports and images of women that appeal to men but often demean women. They could also make beers that taste of something, too. I’ll be interested to hear what the more vocal female beer writers think about this.