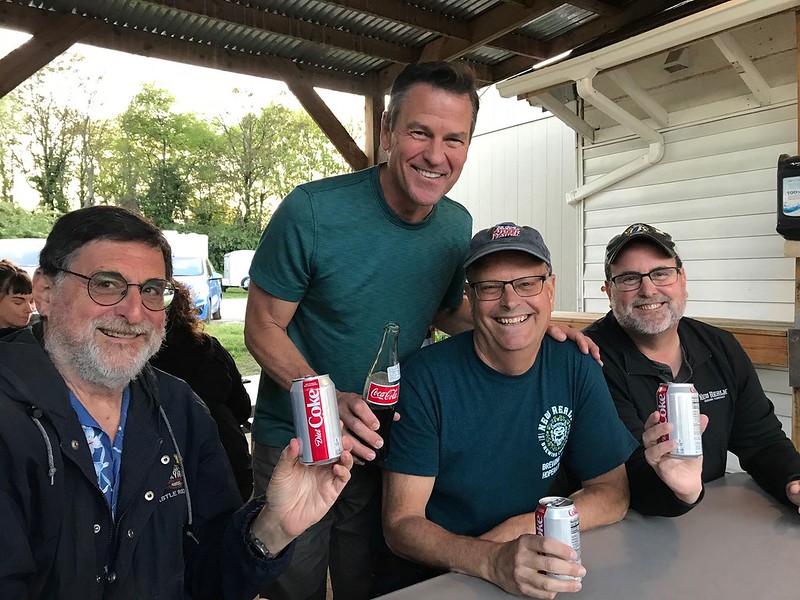 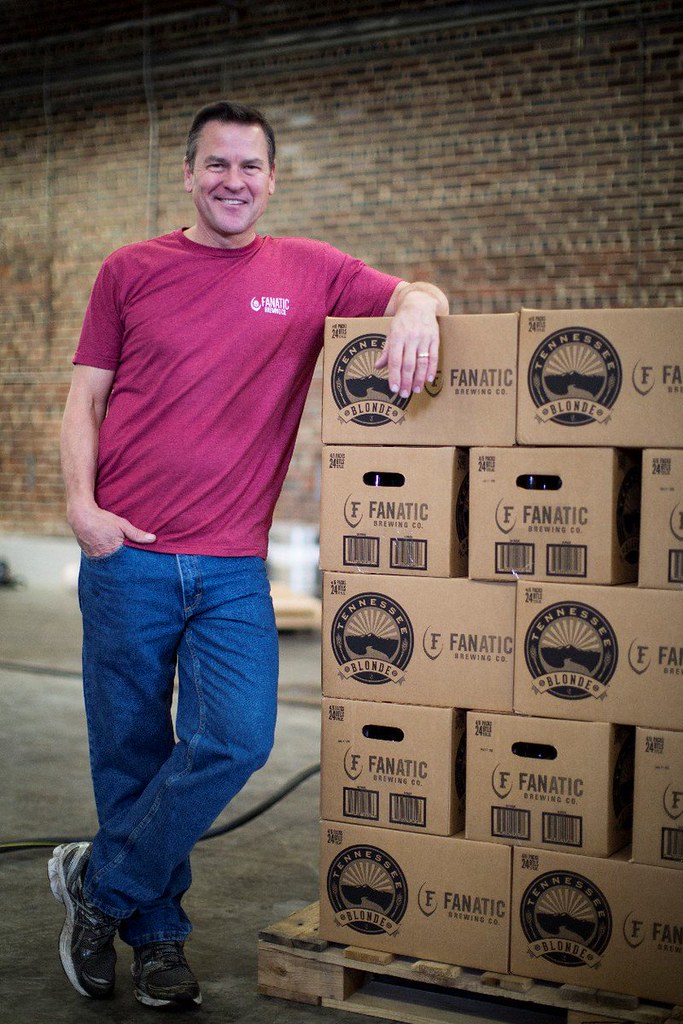 Today is Chuck Skypeck’s 68th birthday. Chuck was a founder of Bosco’s, a brewpub which has three locations in Tennessee and Arkansas, and also Ghost River Brewing. I met Chuck at BA functions many years ago and he’s always been one of the warmest, most genuine people I know. A few years ago, he joined the Brewers Association staff as Technical Brewing Projects Coordinator, and a few years ago we judged together in Melbourne, Australia at the Australian International Beer Awards. Join me in wishing Chuck a very happy birthday. Chuck and me at the Craft Brewers Conference in Seattle in 2006. From a 2011 interview in Memphis’ Commercial Review (Photo by Mike Brown). 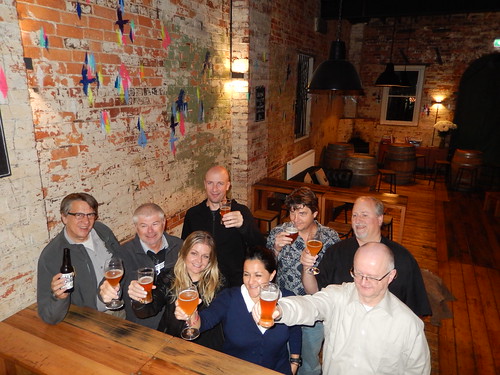 Chuck, me and a few others judging a couple of years ago in Melbourne at the Australian International Beer Awards.

Today is the birthday of William H. Gerst (April 1, 1847-March 10, 1933). In 1890, along with Christian Moerlein as a partner, he bought the Nashville brewery that was founded in 1859. A few years later, he bought out Moerlein and his brewery became known as the Wm. or William Gerst Brewing Co. until it eventually closed down for good in 1954. 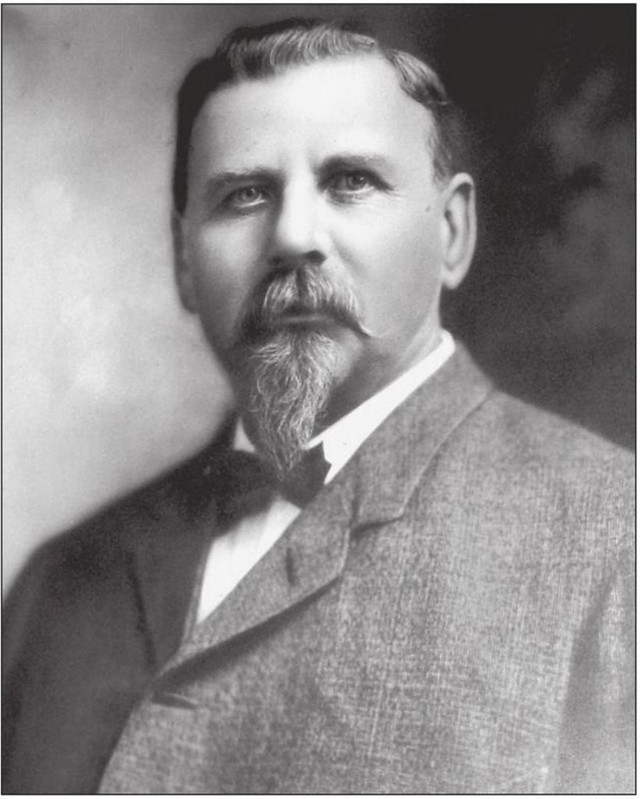 Here’s Gerst’s history from the Gerst Haus in Nashville, Tennessee, which Gerst’s grandson opened in 1955.

William H. Gerst was born in 1847, coming from a long line of brewers in the Bavarian region of Germany. A short time later the National Brewing Company was established in 1859 and changed hands several times. In 1890 Christian Moerlein and William Gerst went into partnership to open the Moerlin-Gerst Brewing Company, until Gerst bought out Moerlin and the brewery became William Gerst Brewing Company in 1893. The brewery was located on 6th Avenue South here in Nashville, Tennessee. William Gerst received a Master Brewers Certificate in 1888, and in 1889 was elected the second President of the United States Brewmaster’s Association. Gerst had a passion for horse racing. In 1910 his horse by the name of Donau won the Kentucky Derby in 2 minutes, 6.5 seconds, and is to this date the only horse owned by a Tennessean to win the derby. Gerst was a prominent business man and also a family man with 4 sons and 2 daughters. The sons all worked in the brewery and eventually would come to run the brewery. William Gerst retired from running the brewing business due to Prohibition. He died on March 10, 1933 and never got to see his brewery after the Prohibition law was repealed that same year. The brewery closed in 1954 and the original building was demolished in 1963. 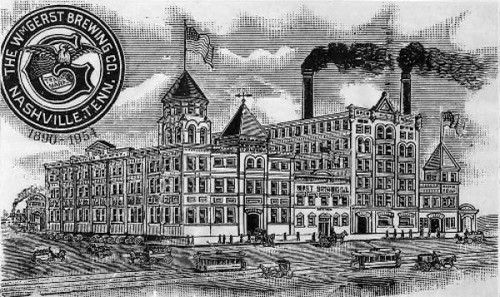 An excerpt from the book Nashville Beer includes this snippet about Gerst:

William H. Gerst was a pioneer in the brewing industry and was also known as the king of advertising. He promoted a variety of his beers at the Tennessee State Fair and Centennial Exposition, gained lots of attention for creating cone-top cans and labeled it as “Brewed in Dixie,” before Prohibition practically shut down the brewery. Gerst lost his desire to brew malt beverages, near beers and other non-alcoholic drinks (Cola-Pepsin, Imperial Ginger Ale, sodas) during Prohibition, paving the way for his four sons to take over the brewery. 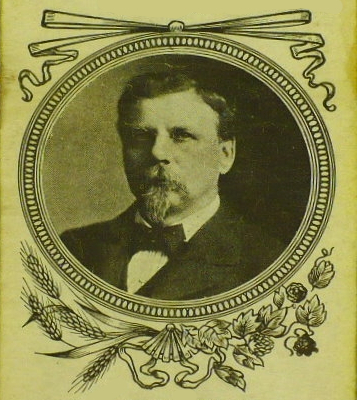 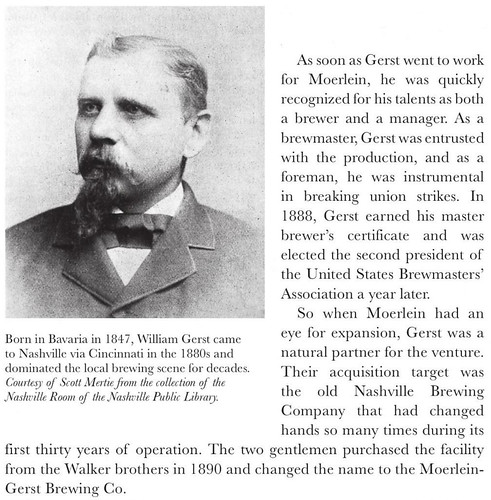 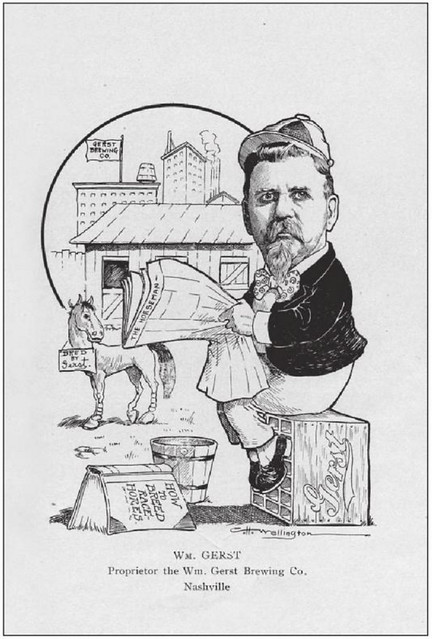 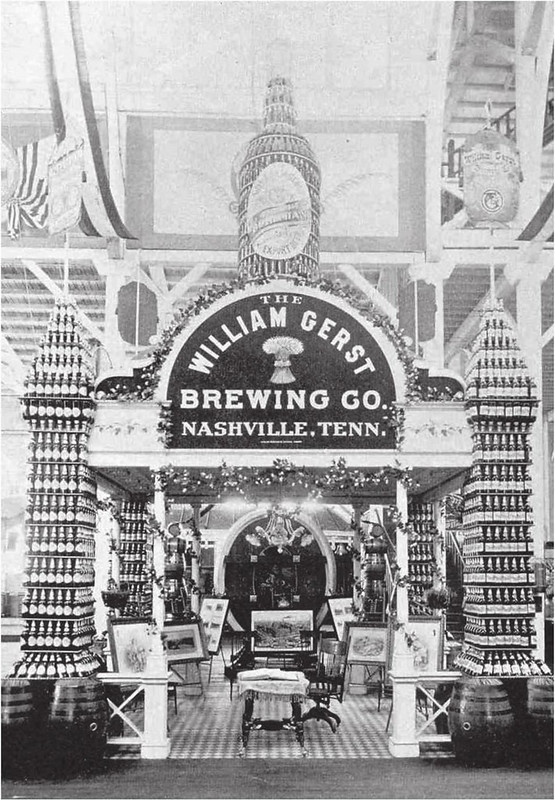 The Gerst Pavilion at the Centennial Exhibition, made from beer bottles and featured a 2,500-gallon cask of beer. 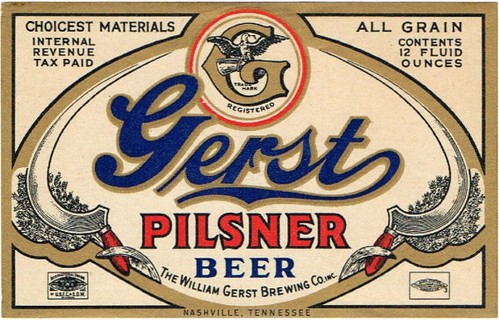 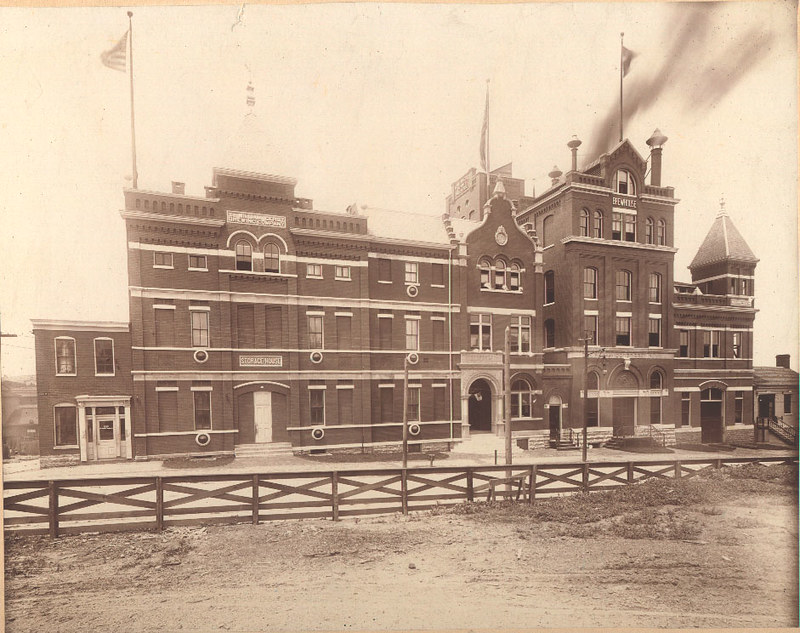 Here’s another interesting historical artifact on beer and good health. This is from the Tennessee State Fair Official Souvenir Program and Guide, from 1907, advertising a talk by a German professor, Dr. P. Bauer, “demonstrating the effect of beer on the health.” It looks like his appearance was sponsored by the William Gerst Brewing Co. of Nashville, Tennessee. One insight he could be expected to give: “Solid foods often remain in the stomach a long time and retard digestion. Liquid foods, like GERST Beer, are an aid to digestion.” Oh, and there’s this subtitle. “People Who Drink Plenty of Beer Are Always Strong and Healthy.” The ad then ends with this branded tagline: “There is Good Health in every bottle of Gerst Beer.” 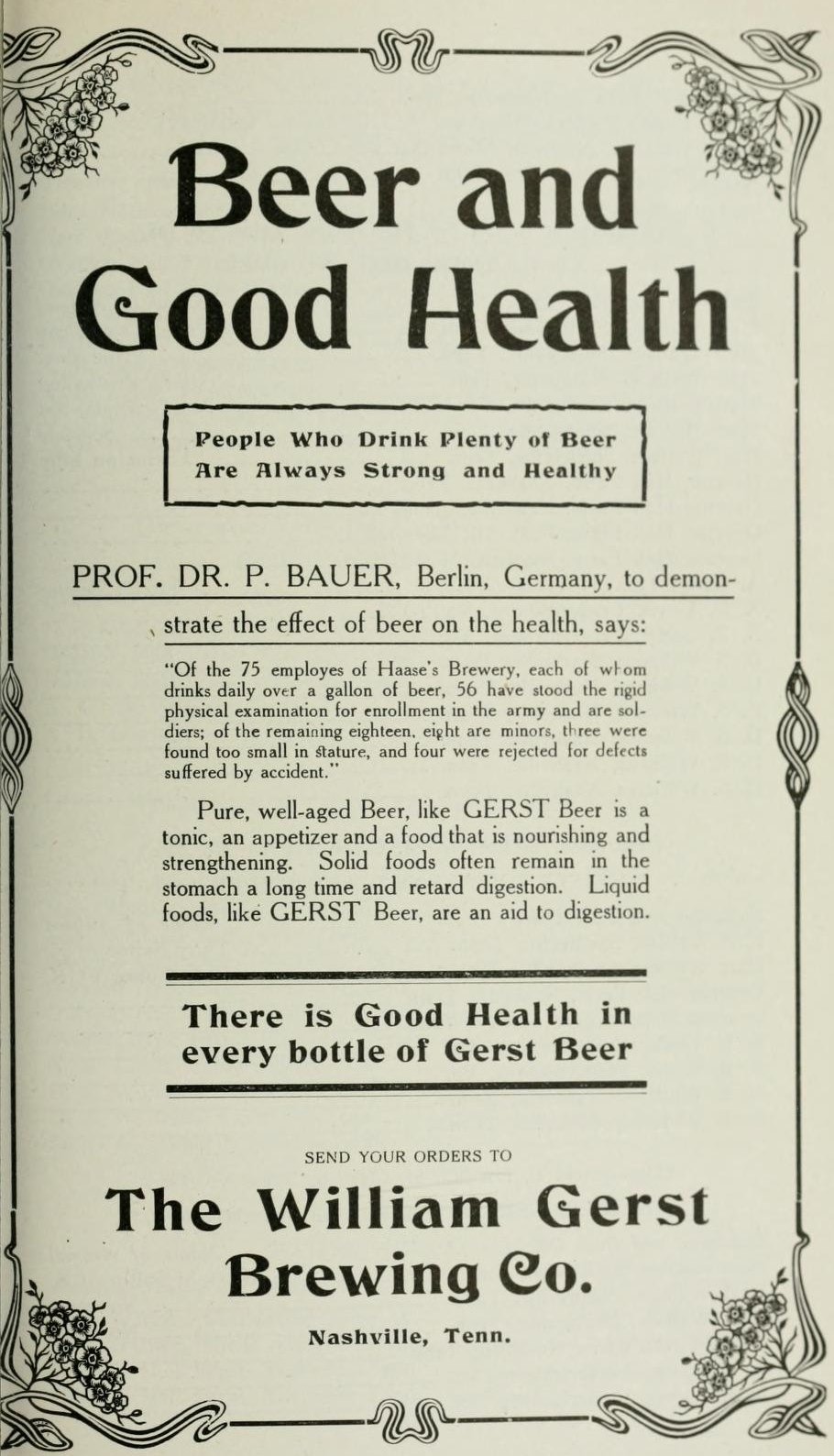 Trying to catch up with all the news fluttering around the beer world, I see that last week the Hardy Bottling plant in Memphis, Tennessee has finally found a buyer. The brewery was originally built by Schlitz in 1971 and then Stroh’s operated it for a time before selling it to Coors, where they brewed their Blue Moon line of stealth micros, along with Zima and Keystone. MolsonCoors shut it down in 2006 and I seem to recall there were some labor disputes there, too. Then later that same year it was sold for $9 million and it became the Hardy Bottling Co.

City Brewing, of La Crosse, Wisconsin, agreed to buy the brewery for $30 million, plus will invest an additional $11 million to renovate and update the facility. When it reopens this summer, it will be renamed Blues City Brewery.

City Brewing Company is the 4th largest brewer in the United States. Prior to this acquisition, City Brewing had over 6,000,000 barrels of capacity between its breweries in La Crosse, Wis. and Latrobe, Pa. The Company currently has approximately 720 employees. With the addition of the Memphis brewery, City Brewing will exceed 10,000,000 barrels (135 million cases) of brewing capacity. The acquisition of the Hardy Bottling Plant in Memphis offers City Brewing the ability to rapidly increase its capacity for brewing, packaging and distribution for its existing customer base as well as to expand its brewing and packaging services to new customers and markets, including those currently served by Hardy. “City Brewing Company welcomes the opportunity to work with Carolyn Hardy and the current staff to fully develop the brewing and packaging capabilities of the Memphis facility.” stated City Brewing President George Parke. “This is truly a significant occasion for our industry and a unique and remarkable opportunity for Memphis, Tennessee.” Carolyn Hardy added.

The Wall Street Journal is reporting that Yuengling Brewery of Pottsville, Pennsylvania is close to finalizing a deal to purchase the brewery in Memphis, Tennessee formerly owned by Coors. Yuengling has signed a letter of intent to buy the brewery for an undisclosed amount and the deal is expected to close in a few weeks. This will be Yuengling’s fourth brewery, as they currently own and operate three breweries, two in Pennsylvania and one in Florida.

The brewery was originally built by Schlitz in 1971 and then Stroh’s operated it for a time before selling it to Coors, where they brewed their Blue Moon line of stealth micros, along with Zima and Keystone. MillerCoors shut it down in 2006 and I seem to recall there were some labor disputes there, too. Then later that same year it was sold for $9 million and it became the Hardy Bottling Co..

Today’s art is by an anonymous artist from 1840. It’s a diorama depicting political life in Nashville, Tennessee and specifically a scene in which as a part of a political campaign, one side is giving beer to a potential voter. It doesn’t have a title per se, but is referred to as Diorama of Political Campaign in Nashville. Giving beer to a potential voter. It’s folk art made of carved wood and is painted. It’s housed at the Tennessee State Museum.