Also at the Anchor event for Maureen’s book, Ambitious Brew, I had my second encounter with Beer Chips, a new snack food on the market.

Sadly, they don’t do the cans anymore, not since the company was taken over by a nephew and moved from the farm to an actual plant. Happily, they still taste as good but I must say some of the magic in them is gone. But I bring this up only to illustrate that potato chips are one of the other things I know something about. So when someone makes chips with beer — combining two of my great loves — then attention must be paid.

The creator of Beer Chips, Brett Stern, who’s a native New Yorker, flew down from Portland, Oregon (where he makes his chips) with boxes of his chips in tow. That gave me a better chance to try the chips, and I must say my first reaction is that they’re very tasty and highly addictive. Of course, that may be the added sugar, itself an unusual ingredient in potato chips. Generally, there are only three ingredients in what I’ll refer to as “craft chips” — let’s call it the spudheitsgebot — which are potatoes cooked in oil (either a vegetable oil or lard, most commonly) with salt added. I’m told the beer used is a bock style that is reduced to a powder and sprinkled on the chips during the cooking phase. And for the most part it works. They do seem to have just a hint of beer flavor and happily it’s not overpowering the way it is in barbecue or some other strongly flavored chip. I brought some home for my wife to try and she loves them, as well, and has become quite addicted. Now if I can only get BevMo to get off their bureaucratic arses and carry them in my neighborhod …

Here’s another review of Beer Chips from Chipworld.

These potato chips had a kettle-cooked texture and were crisp with varying levels of crunch. They earned praise around the chip bowl for being quite tasty. Most of our tasters thought that the chips did taste like beer, though some thought the beer taste was most noticeable on first bite and faded away after that. The chips were generally smallish with wiggly, irregular shapes, some folded over. 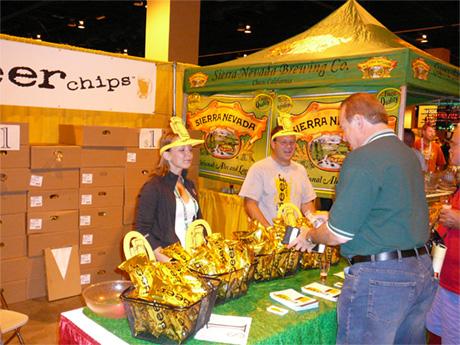 The Beer Chips table at GABF.