Today in 1941, US Patent 2262863 A was issued, an invention of Robert C. Schock, for his “Lauter Tank.” There’s no Abstract, although in the description it includes this summary:

Lauter tanks, as is known, are provided with two bottoms, a false or inner bottom which is in the nature of a screen or a perforated plate or a slotted plate permitting the wort to pass therethrough, and a lower bottom which collects the wort that has filtered through the false bottom.

It has heretofore been’ proposed to remove the wort which is passed through the false bottom, by a large number of separate pipes, one for each subdivision of the lauter tank, and these pipes, generally speaking about twelve to thirty-two in number, having an equal number of discharge valves or cocks, lone for each pipe. ‘I’he control of the wort by means of such a multiplicity of valves was difficult and not at all times possible.

Furthermore, in some of the lauter tanks heretofore used, the outside bottom was entirely flat and in consequence there would be an adherence of the wort to the bottom, so that the wort would accumulate on such bottoms and bring about a harmful condition of uncleanliness, favorable to the generation of bacteria in undesired quantities, unless carefully cleaned after each use.

The object of the invention here is to provide l an outside bottom which prevents a building up of sediment or under dough, and to replace the said multiplicity of pipes and valves by three valves which can be readily controlled and regulated in accordance with the practice of determining the amount of sugar in the wort, and thereby determining the density of flow of the l wort as it bypasses through the saccharometer chambers, and in the event that the flow in any of the chambers which is so governed by the three valves is not of the desired order, it can be throttled until the flow shall have been equalized.

For this purpose, the improvements in the lauter tank forming the basis of this invention are, first, the provision of three manifolds concentrically arranged to render each of said manifold saccharometer grant. Secondly, the invention consists in providing the outside bottom with a series of concentric channels, each V-shaped in cross-section, the apex of the V being provided with the outlet pipes which discharge the wort into the aforesaid manifolds, such V-shape formation providing the outside bottom with concentrically disposed inclined walls, to enable a free flow of the wort which is passed through the false bottom in such a manner as to maintain the inner walls of these V-shaped circumferential members clean of the wort, by promoting faster running thereof and thus to prevent the formation of undesirable accretions of solid matter from the wort, also to aid in preventing under dough and to prevent any possible generation of undesired bacteria. 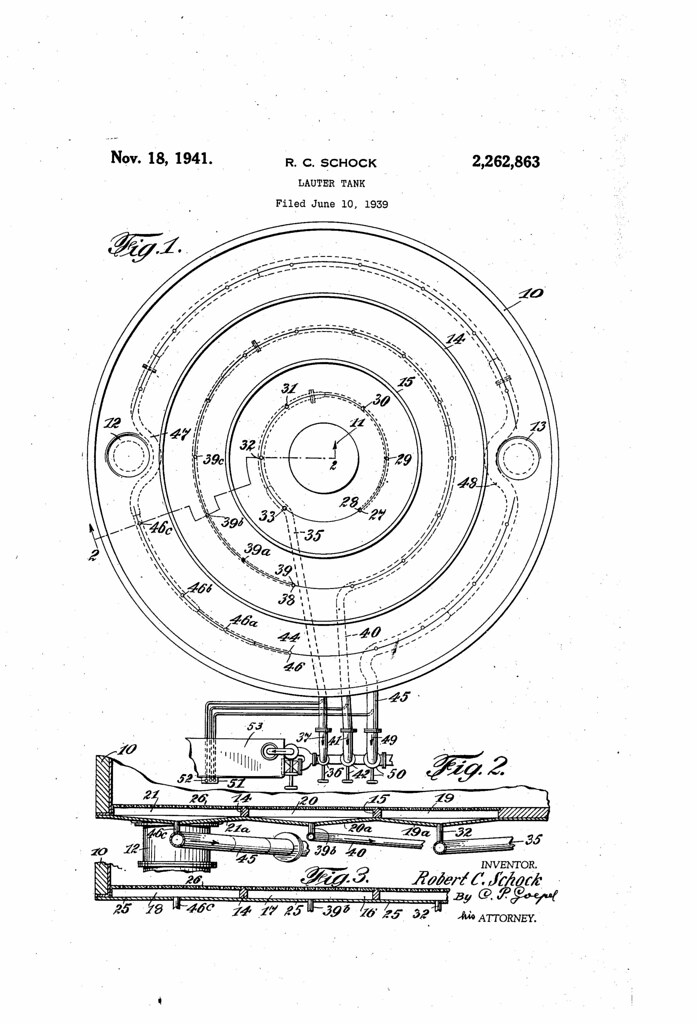