Yesterday’s Beer in Ads post featured an ad for Budweiser from the 1970s. The ad, Pick-A-Pair Twice!, was trying to get people to buy not one, but two six-packs. I wondered in the post when the 12-pack debuted. My ignorance about this stems largely from having grown up in Pennsylvania, which is a case state, one of the weirder examples of what happened when alcohol laws were left to the states following the repeal of prohibition.

I’d never really thought about the 12-pack package until I was posting that ad last night. I remember reading about breweries experimenting with different size packages in groceries way back when until they decided six was the right weight for women shopping to pick up and bring home (assuming that’s even true).

After high school I went into the military, stationed in Virginia and then New York City, but generally went to bars and rarely bought beer for at home since I lived in a barracks. After my stint in the army, I moved back to PA. When I moved to California in 1985, there were 12-packs everywhere, though in retrospect I don’t remember even paying any special notice of them. By that time, most of the beers I was interested in came in 22 oz. bottles, or maybe six-packs. Who was the first early small brewer to have 12-packs? My guess is probably Samuel Adams. Sierra Nevada wasn’t until the latter 1990s, I believe. I was still the chain buyer at BevMo when they debuted. RedHook might have been early on, too.

Anyway, I wasn’t expecting an answer, but happily Dave “Beer Dave” Gausepohl sent me an excellent response. Beer Dave is breweriana collector of epic proportions, and has over 400,000 items in his collection, He’s also a board member of the BCCA — the Brewery Collectibles Club of America and a frequent contributor to All About Beer magazine. Here’s his short history of the 12-pack, written extemporaneously, from his own studying of beer history, reprinted with his kind permission.

Six-packs appeared first by Pabst just following World War II. They tested numerous package sizes and determined in a sexist fashion that the average housewife could comfortably carry six beers home with the shopping. The 12-pack came a few years later, and it resembled the dimensions of the Full Sail Session 12-packs. This was due to the fact that the first cans in 12-pack packages were cone top and crowntainer cans. This was also a corrugated carton. These cans were able to be filled on most breweries bottling lines with little retooling and they did not have purchase separate packaging equipment. The one way bottle was much more desired than cans when the flat top can debuted in 1935. World War II also limited the steel for cans and returnable bottles were a friendlier package towards the war effort.

In the 1960s when the convenience store took off, six-packs were the package of choice. They worked with the shelf space mostly laid out for milk and dairy items. The moisture of the retailers’ refrigeration equipment also was not kind to packaging larger than six packs. Also glass was still the package of choice for beer. Glass was a cheaper package than steel or aluminum. Many breweries had 8-pack glass as their package. It was not until after the oil crisis of the 1970s that the weight of packaging became a major cost factor. This movement pushed breweries to pursue cans over glass. 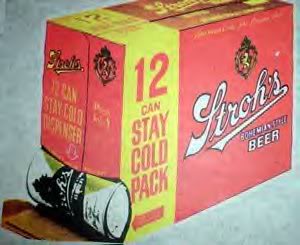 A Stay Cold Pack, this one by Stroh’s.

Rainier debuted the Cold Pack in the early 1960s. In the Midwest it was not until the late 1960s when Stroh’s pioneered a similar 12-pack with a foilized paper that could with withstand the moisture of the refrigeration systems used at retail. A number of carton manufacturers like Mead developed waxed versions of cardboard to withstand the moisture levels. Corrugated rather than cardboard was the leader prior to the advent of the moisture resistant 12-pack. Back then just like today wet corrugated boxes have NO strength or purpose. 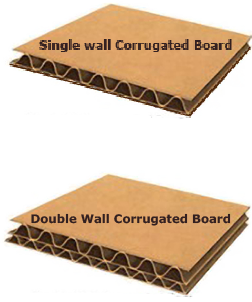 The difference in corrugated boards.

The Pick-A-Pair campaign was a huge success for Budweiser. Ironically a number of states did not allow for 12-packs to be sold. The eight-pack was the largest package allowed to be purchased at retail in numerous states. The enormous growth to the suburbs also increased the demand for a larger retail pack. Since the country was driving to the store rather than walking or taking the bus or street car, more items could be carted home on the average shopping trip. The development of the supermarket drove this demand for package innovation. Also, the advancement of the size of the household refrigerator made this a more inviting package. 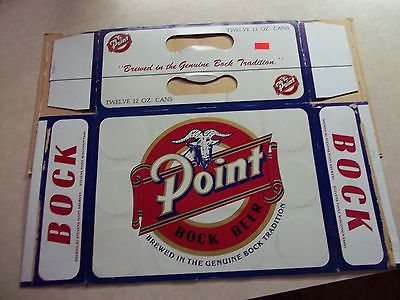 An example of a cardboard 12-pack.

Prior to the 1970’s Returnable bottles in the 12, 16 and even quart bottle were very much a part of how beer was retailed. These fiberboard cases were very durable and withstood many trips back to the breweries to be refilled. These were a desired package with the on-premise trade. I imagine you remember the heavy wooden crates and glass bottles that soft drinks were packaged in until the 1980s. 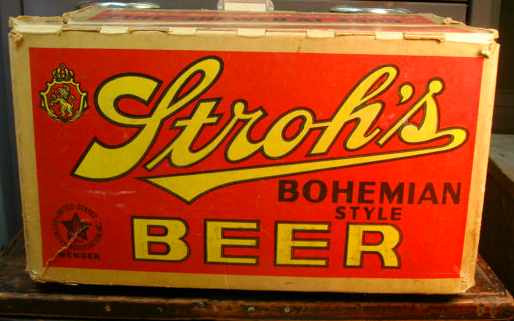 An example of Fiberboard.

Thanks Beer Dave. Now you know.