Today is the 51st birthday (maybe) of Joe Wiebe. Joe is a Canadian beer writer from Victoria, B.C. He founded the Victoria Beer Society and co-founded Victoria Beer Week. He writes online as The Thirsty Writer and published “Craft Beer Revolution: An Insider’s Guide to BC Breweries.” Joe also provides content for the BC Ale Trail, an online resource about breweries in British Columbia. I’d worked with Joe on Flagship February virtually but finally got to meet him recently while judging the Canada Beer Cup earlier this year. Join me in wishing Joe a very happy birthday.

Today is the birthday of William H. “Billy” Biner (April 16, 1889-January 5, 1953). Biner was a journeyman brewer who worked for numerous breweries over his long career. He was born in the Montana territory to Swiss immigrant parents. His father, Theophil Biner, knew Leopold Schmidt and even worked at his Olympia Brewery. Biner sent two of his sons, including Billy once he’s finished with a career as a boxer, to brewing school in Milwaukee. Biner’s first brewing job was at the Phoenix Brewery in Vancouver, British Columbia in 1912. He then worked as the brewmaster for at least eight more breweries, from Los Angeles to Canada. The breweries he worked at included the Mexicali Brewery; the Orange Crush Bottling Company in L.A.; the Mexicali Brewing Company again after it was rebuilt following an earthquake; then the Kootenay Breweries, Ltd. in both Nelson and Trail, in BC, Canada; followed by the Ellensburg Brewing Co. in Washington, and then in 1937 he founded his own brewery, the Mutual Brewing Company. But it didn’t last thanks to World War II and supply issues, and it folded. Afterward, he moved on to both Sicks’ Century Brewery in Seattle and the Silver Springs Brewery in Port Orchard, Washington. Finally, he ran the East Idaho Brewing Co. in Pocatello, Idaho until 1946, when he retired from brewing and bought his own bar, the Leipzig Tavern in Portland, Oregon. He stayed there until a year before he died, which was in 1953.

You can read his biography at Brewery Gems, written by Gary Flynn working with Joseph Fulton, the grandson of Billy Biner.

I suspect that by the time you read this, all ten bottles of the newest release from Storm Brewing, of East Vancouver in British Columbia, will already have been sold, despite the hefty $1,000 per bottle price tag. The new beer is Glacial Mammoth Extinction, and is described on Storm’s website. Essentially it’s a sour beer that, according to brewer James Walton, was frozen “into one big, solid ice cube at -30 degrees Celsius, a process that took him about a month to complete.” Then the water was removed, and the remaining liquid was “aged in French oak barrels for two years until it was ready.”

Part of the expense of the beer is the packaging, with a hand-blown glass bottle fashioned by a local artist, using a 14K gold clasp and 35,000-year-old ivory for the pendant hanging from the neck of the bottle. The beer weighs in at almost 25% a.b.v. and is described as “quite sweet, almost like a port.” 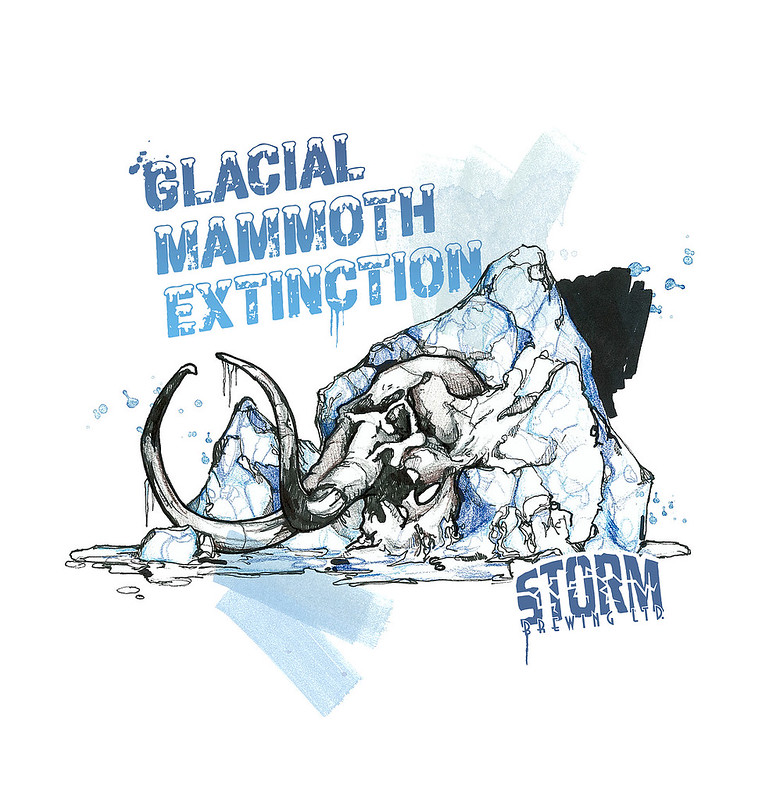 The Beer: The Glacial Mammoth Extinction is the first beer of its kind (in the world!!) and the result of freezing a strong sour beer to -30C in two stages over a one month period. The sweet alcoholic liquid was separated from the extinct ice glacier that was left in the tank and then aged in French oak barrels for two years until it was ready. The final product is a rich, complex, and viscous 100% malt beverage that resembles Port more than beer.

The Brewery: For over 20 years brewer James Walton and the Storm Brewing team have been bringing Vancouverites innovative and unpretentious craft beer. James is hailed as a craft beer pioneer by both media and trade and is proud to be one of the very first brewers in North America to brew sour beer. The brewery sits at the corner of Commercial Drive and Franklin Street in gritty East Vancouver and is considered a “must-visit” destination by craft beer fans worldwide.

The $1000 Bottles: A total of ten bottles were designed and made of hand blown glass by Terminal City Glass Co-op’s Brad Turner. Adorning these bottles are one of a kind prehistoric mammoth ivory pendants made by local sculptor Richard Marcus. The ivory used for these pendants is from a tusk estimated to be 35,000 years old and they are complimented with a 14K gold clasp. Both of these East Vancouver artists are renowned for their craft and their studios are located within walking distance from the brewery. 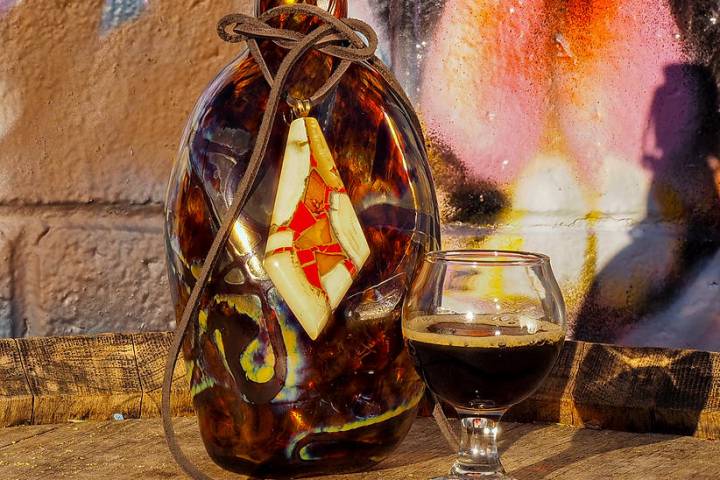 This week’s work of art is by Canadian artist Alida and is a still life she did of several beer bottles while on a trip to a family cabin over a long weekend in September of this year. As she tells it. “I had good intentions of painting outdoors, but in my opinion it was too cold so instead I chose to do a still-life.” The painting has no title, so I’m calling it Still Life With Beer Bottles. Originally from the Yukon, Alida now lives in British Columbia. She points out the bottle at the far left is Ice Fog IPA from my friends at Yukon Brewing, with “artwork by fantastic Yukon artist Emma Barr.”

For more about Alida, check out her blog Alida’s Art. She also has a blog featuring her photography, Alida’s FSJ Photos.