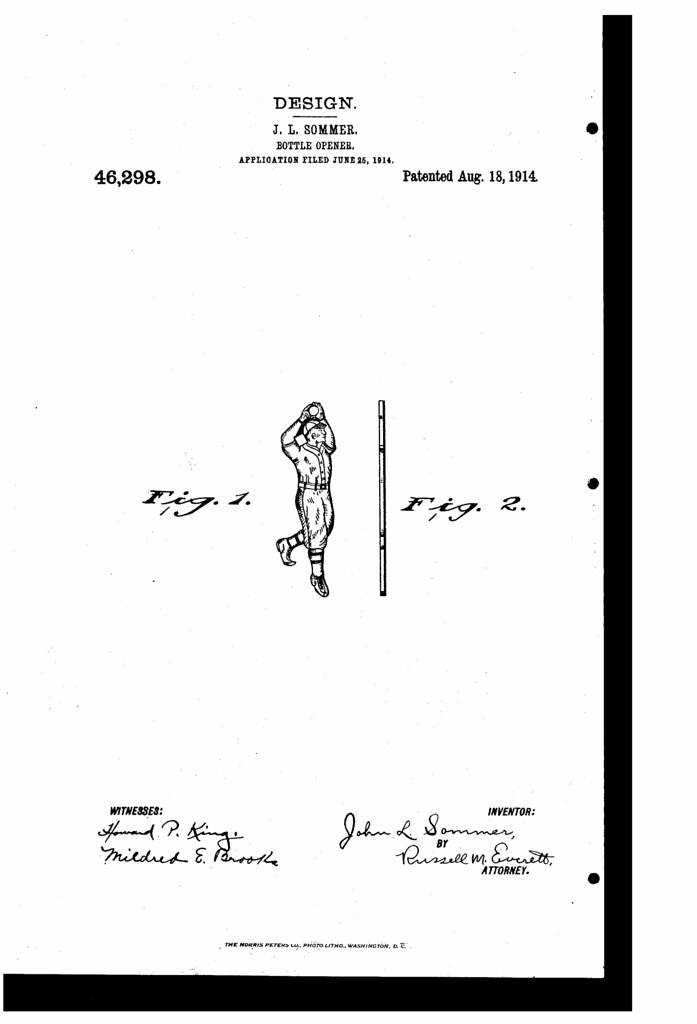 For their New Zealand market, Beck’s hired an ad agency, Shine, to create some buzz for their brand, and they came up with The Beck’s Edison Bottle, the world’s first beer bottle you can play like a record. 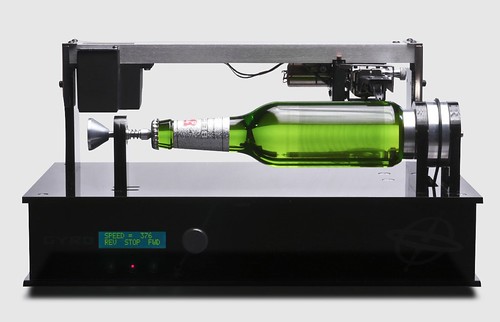 Here’s the description from Vimeo:

19th Century technology meets 21st Century music over a bottle of beer in the latest extension to the Beck’s Record Label project.

This time, the art label has evolved, and been replaced by the grooves of Auckland band Ghost Wave. Their new single was inscribed into the surface of a Beck’s beer bottle which could then be played on a specially-built device based on Thomas Edison’s original cylindrical phonograph.
Making the world’s first playable beer bottle was a formidable technical challenge. The clever people at Auckland firm Gyro Constructivists first had to design and build a record-cutting lathe, driven by a hard drive recording head. Then they reinvented Edison’s original cylinder player, using modern materials and electronics and built to very fine tolerances.

The Edison Bottle made its public debut at SemiPermanent in Auckland in May to a standing ovation from the assembled media and design community.

Beck’s has had a long association with music and art. In fact, at about the same time Heinrich Beck was brewing his first beer in the 1870s, Tom Edison was tinkering away on designs for the first phonograph.

Considering how beer has influenced recorded music since then, this physical collaboration was very appropriate and long overdue.

And below is a video showing the design and manufacturing process, along with a short demonstration of the bottle being played.

These close-ups show what the grooves on the bottle look like.

Maybe it’s my own skepticism, but this is setting off all of the Amway/Infomercial/Snake Oil Salesman alarm bells. On Indiegogo — similar to Kickstarter — someone has launched a project for the Ziblee Beverage Pleasure Enhancer, which they describe as follows. “Briefly stir your favorite adult beverage with the Ziblee and be amazed at the improvement in flavor and smoothness.” Uh, huh. Sure. Convince me.

Here’s what it looks like. To me, it looks roughly like a honey dipper made out of a metal spring with an aluminum handle. But no, the spring is made from “the finest stainless steel [they] could find. Surgical grade stainless steel,” no less. 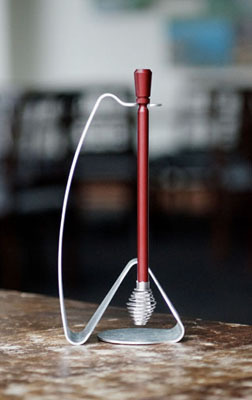 But actually it’s the pitch, and the fact that there’s a special crystal inside the wand, that makes is sound like it’s coming from a snake oil salesman.

The Ziblee is an energetically-charged wand-like device that, when stirred gently for six or seven seconds in a glass of wine, spirits, coffee or juice, liberates all the flavor of the beverage and smooths the taste significantly. Just like award-winning vintners, connoisseurs and sommeliers who have used the Ziblee, you will be astounded at the difference it makes. It really does “make the cheap stuff taste like the good stuff…and the good stuff taste even better!”

Beer is conspicuously absent, but apparently every other alcohol on the planet, along with coffee and juice, will magically be improved by a few stirs. How does this “magic” work? Here’s their explanation.

The Ziblee is not an ‘aerator’ and it doesn’t have magnets. It’s a totally new technology that uses the subtle energy of frequencies. Those frequencies impact the beverage on a molecular level releasing its full flavor and smoothness. There is no chemical change in the beverage at all, nothing dissolves, nothing is added or taken away. It really is a quantum energy thing and there are only two ways to know that something wonderful has happened to your drink. The first is to look at the molecular structure of the drink under an electron microscope, which we’ve done — but honestly, it’s not that easy to do. The second is a far better option…taste it! Do a variety of taste tests. All in the name of scientific research of course! This is absolutely the most fun you can have using quantum physics!

It works through specially selected natural quartz crystal. Due to their balanced and set formation, certain crystals have the ability to tune into the vibrations of what is around them. People have known that since ancient times. Today what we’re able to do with the Ziblee is ‘tune’ the crystal with a proprietary combination of frequencies. When the super-charged Ziblee connects with your beverage it harmonizes the frequencies to gently reveal the remarkable story within every glass. It makes every sip, every drink, every conversation more pleasurable.

Dizzy yet? Toward the end of this new ageiness, they claim that it “works with all adult beverages, making them taste smooth, expensive,” but finally address beer. “With carbonated beverages like beer, soda and champagne the Ziblee tends to make them go flat, so don’t ruin your drink. We’re not sure why that happens, but it does. We dumped many a beer down the drain trying to figure it out.” It’s funny that they don’t know why it happens, suggesting to me that they don’t really know anything about their claim that it does work on non-carbonated drinks, except water.

So what do you think? Magic or hokum? I’m sure it’s not that simply swirling your drink makes it taste differently. That would be too easy, wouldn’t it? Who would fall for that? 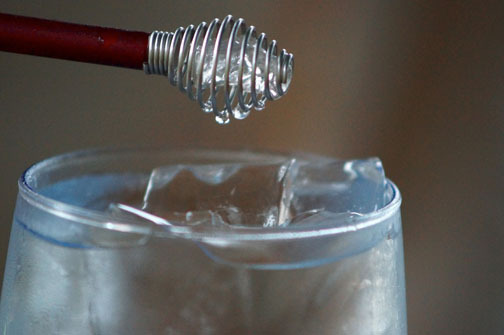 This looks promising, although it’s not yet out on the market. A new device that pairs with your smartphone, Alcohoot, will apparently be a police grade breathalyzer. But not only that, it can direct you to the nearest restaurant for a cup of coffee, start a timer until your body should be below a preset BAC, or if all else fails call a friend or a taxi. It can even give your exact position using GPS even if you’re too far gone to know where you are.

I could do without the scary statistics that begin the video below, but I know their goal is to make sales, so it’s understandable, at least. You can safely skip the first 30 seconds and get to the meat of it. Unfortunately, as I mentioned, it’s not on the market just yet, but it may be soon. The suggested price it should be around $95, and may even drop as sales increase, which given everything it does seems like a bargain, especially when compared with the cost of standard low-tech breathalyzers.

PopSci also has a short video of the two founders of the company demonstrating the Alcohoot at an event at the New York Stock exchange recently. If it delivers on its great promise, it may be quite the device. I know I’d like to give it a try. I have an e-mail out to the company to see if I can find out more about it and when they think they’ll begin selling Alcohoot. 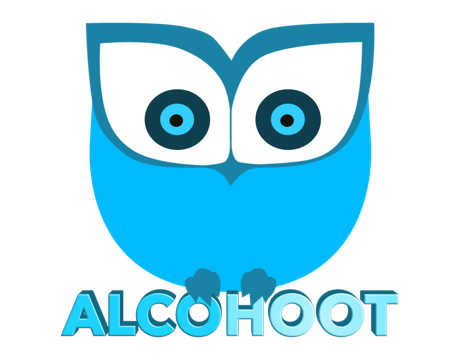 Earlier this year, I watched a stand-up comedy special by Jake Johannsen on Showtime, entitled I Love You. In one of his bits during the show Johannsen describes a dream — a man dream — for putting a mini fridge in his bedroom. Here’s the essence of it, omitting the added automatic coffee maker he wants to put on top of it.

I was going to buy a mini fridge, and that was going to be my bedside table. I thought I had a great idea. So at night I could be lying in bed with my wife, maybe watching a movie or reading a book, and have a nice cold beer out of the mini fridge, maybe two. That was my dream.

Long story short, the punchline is his wife said no, which was his example of compromise between married people. Trust me, it’s funnier in context. Well apparently somebody was listening and felt his pain. A new company, ManTables, has created a line of small refrigerators that resemble end tables so they won’t look out of place in a living room, rec room or … bedroom.

They ManTable refrigerators come in three colors: black, walnut and tobacco. Below in the walnut finish in a living room setting. 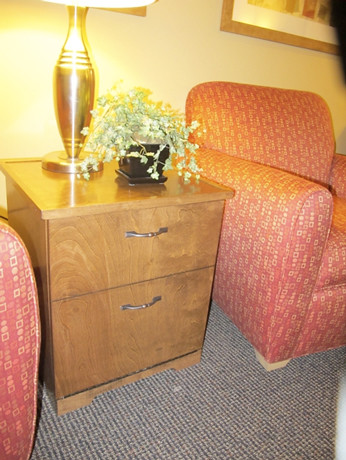 And here’s an open view. The website claims they can fit 45 beer cans. No word on how many bottles. 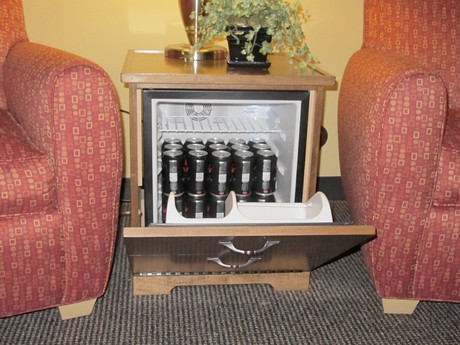 It seems to me they’d be perfect for a rec room or man cave that was some distance from the kitchen. The cost is $389.99, plus shipping, tax and handing charges.

I’m not quite sure what to make of this gadget. It was created by a design firm in Australia, JonesChijoff, working with Edwin Koh and Iqbal Ameer for their Melbourne bar, Biero. It’s called a Beer Vault, and takes bottled beer and transfers it into a draft environment, cooled by glycol and kept under pressure to preserve it using carbon dioxide which they claim maintains its freshness as if it was still in the bottle. It was also designed so the bottle itself can be displayed just below a clear UV-protected tube that stores and dispenses the beer. (Thanks to Andrew M. for sending me the original link.) 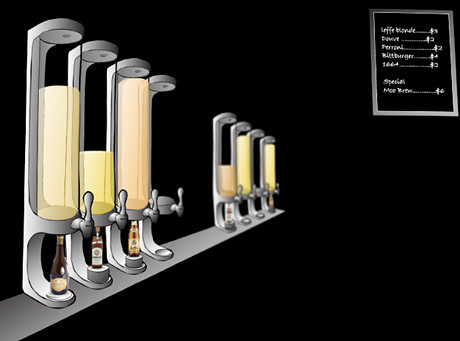 And here’s the finished product, behind the bar at Biero bar. 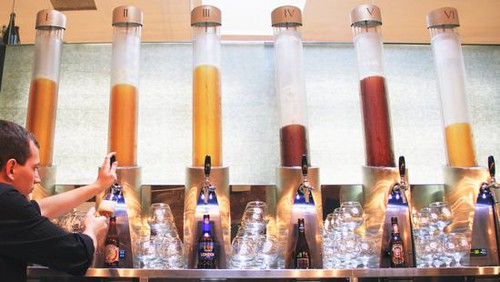 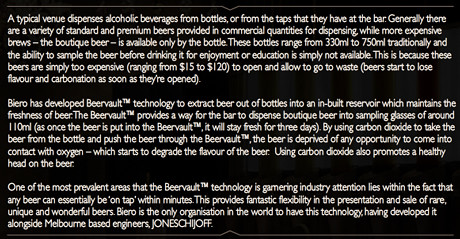 And there’s also a blueprint there, too. 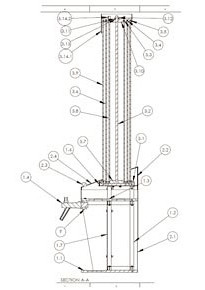 Be able to offer premium beer to punters in a way that hasn’t previously been done. Any beer is now available on tap! But not displayed in an industrial tin-can hidden away, but out ‘n’ proud, showcasing the varying hues of amber.

Syphoning the bottled beer into the BeerVaults and keeping it under the same pressure as was in the bottle before the lid was cracked. It is also chilled via a clear volume of liquid glycol surrounding the beer, which reticulates through a chiller. At JONESCHIJOFF we put simplicity above all else, and this was the simplest yet most effective solution.

Apparently it will keep the bottled beer fresh for about three days, meaning more people could theoretically buy a small amount of a rare beer, without having to open and potentially even waste a whole bottle. So maybe it’s a good idea? I guess time will tell.

And here’s a wider shot of the Biero bar. 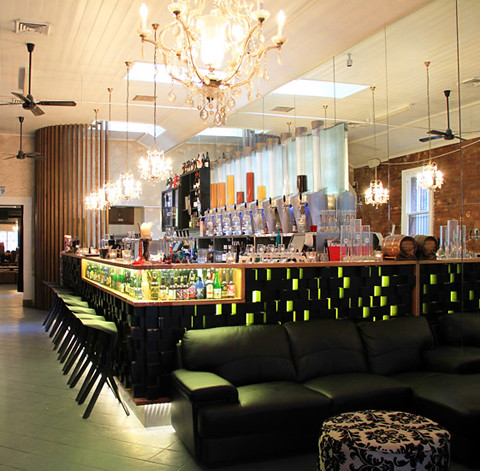 It is not known precisely where the mythical Gnome originated, or why, but their mythology spread throughout Europe. Eventually the more common garden gnome originated in Germany in the 1800s and by the 1840s had spread to England and other parts of Europe.

In Germany, the gnomes (or dwarfs as they are known there) were often portrayed as miners. There is a theory that miners, of small stature, came from the island of Crete around 1,500 BC to dig for gold and silver in parts of Europe, including southeast Germany, and they might have been the origin of the mining dwarf myth. Dwarfs often featured in German fairy tales, such as those told by the Brothers Grimm, and dwarf figurines were thought to bring good fortune to a home if placed in the house or garden which is why they were adopted by so many German homes. The familiar pointed red hat that we see on many garden gnomes today was originally a representation of the hat that was once worn by miners in the mountains of south-east Germany.

Now Gnomeland, a UK dealer in garden gnomes is offering a beer drinking garden gnome, perfect for your hop yard.

You can also customize the label on the beer bottle your garden gnome is holding on to, as shown in this Newcastle example. 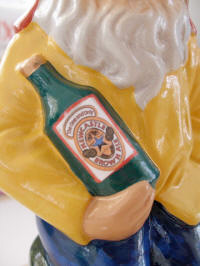 Of course, at least one other beer variety exists, the gnomes created by Bas for his wife’s Urthel beer. Oh, and you want more gnomey puns — and who doesn’t? — check out Gnome Pun Intended.