Wednesday’s ad is by the Brewing Industry Foundation, from 1945, part of a series of ads the beer industry undertook just as World War 2 was ending, after their “Morale is a Lot of Little Things” series. They were also a precursor to the “Home Life in America” series that was numbered (and which I’ve featured before), and very similar. Each ad featured an original illustration or work of art by prominent artists of the time, along with the first use of the “Beer Belongs…enjoy it!” tagline. It’s also when the UBIF started using “America’s Beverage of Moderation” in their advertising.

In this ad, entitled “New England Clam Bake,” the scene shows a beach where a dozen people are having a clam bake, complete with many beers. The painting was done by William Palmer, who was an “American painter who created public murals” from Des Moines, Iowa. 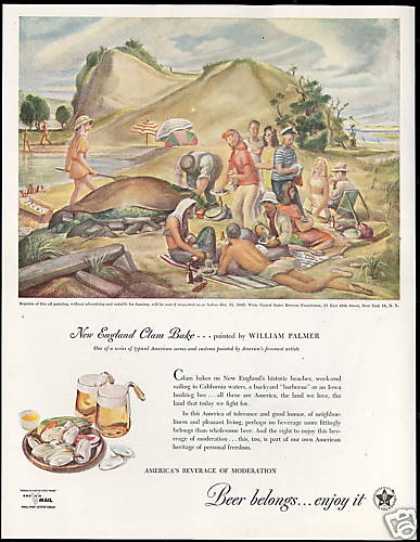 Monday’s ad is for Schaefer Brewing from 1970. The ad is promoting the idea of consistency with the curious tagline, “Every Glass of Schaefer Tastes the Same. That’s What Makes It Different.” The ad was for the Boston and New England market, suggesting enjoying your Schaefer beer while watching the Red Sox play baseball, and also mentioning that it was sold at the concession stands of, presumably, Fenway Park. In case you missed it, yesterday my friend and colleague Andy Crouch dropped the bombshell that Long Trail Brewing of Bridgewater Corners, Vermont was in the early stages of purchasing Otter Creek / Wolaver’s Brewing, also located in Vermont. Not that I doubted him, but I was able to confirm the news through a well-placed anonymous source. Apparently it’s too soon for an official announcement and the story leaked (not by Andy, I should stress) so I was unable to get any additional details. I tried to reach owner Morgan Wolaver, but so far I haven’t heard back from him. I’ll update the story when I can. For now, you can read the full story at Andy’s Beer Scribe.

Greg Noonan, the craft beer pioneer who founded the Vermont Pub & Brewery in 1988 passed away October 11. He died in his sleep Sunday night. He was only 58 years old. His brewery was one of the first on the east coast, New England and, naturally, Burlington, Vermont. He’s not as well known for his contributions to the industry as he probably should be.

He will be missed. Raise a toast to his memory.