You are here: Home / Beers / Patent No. 3293040A: Method For Chill-Proofing Beer With Water Soluble Alkyl Cellulose Ethers

Today in 1966, US Patent 3293040 A was issued, an invention of Raymond L. McAdam and Richard G. Shaler Jr., for their “Method for Chill-Proofing Beer with Water Soluble Alkyl Cellulose Ethers.” There’s no Abstract, although in the description it includes this summary:

The present invention is in part an improvement in the now conventional method of chill-proofing beer by the addition to the beer of a swelling gelling clay such as hectorite during processing of the beer. In the preferred embodiment the present invention contemplates the combination of a water soluble cellulose ether with the clay. This combination is employed as the clay itself was previously employed. Through the use of the new combination it has been discovered that the chill-proofing properties of the clay are maintained as before but the sludge produced by the clay in the beer is substantially reduced. Also, it appears that the beer is less turbid than when the clay alone is used.

Sludge reduction is desirable since beer is trapped by the sludge and is lost when the sludge is removed. By reducing the sludge level a greater recovery and yield of beer is possible. 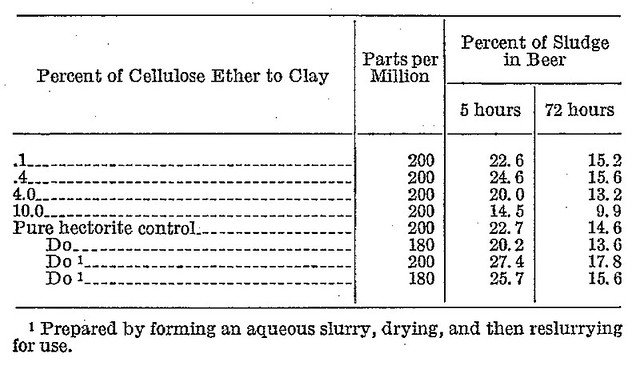