Taco Bell announced today the opening of their first Taco Bell Cantina in Wicker Park, Chicago. The new restaurant had a soft opening today, with a grand opening scheduled for September 22. A second one will open in San Francisco later this month. One aspect about the new concept, known as “urban” restaurants, that stands out is they will serve beer, along with wine, rum, vodka and tequila.

“These new urban restaurants are a critical part of our growth strategy in markets where people experience our brand differently,” said Brian Niccol, chief executive officer, Taco Bell Corp. “Today’s consumers are living in more urban settings and our new restaurants cater to their lifestyle in adapting our traditional restaurant concept to fit their modern needs.”

Taco Bell Cantina restaurants will be the first and only Taco Bell restaurants to serve alcohol to customers who are of legal drinking age. The San Francisco restaurant will serve beer and wine only, while Wicker Park will serve beer, wine, sangria and twisted Freezes. Cantina restaurants will also feature a new tapas-style menu of shareable appetizers – including nachos and rolled tacos – during designated hours each evening, in addition to the full standard Taco Bell Menu. 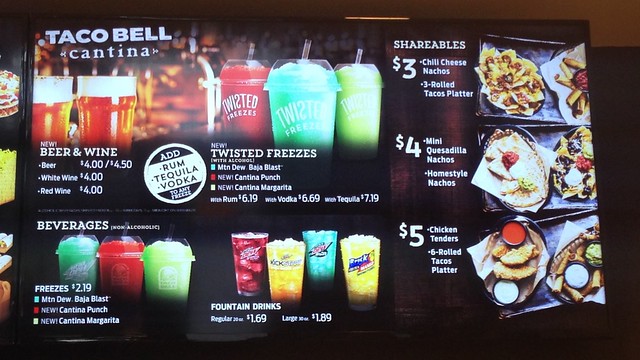 According to the Chicago Tribune:

Toast to the fact you’re drinking in a Taco Bell over a new menu of what the brand is calling Shareables — essentially, appetizer baskets. Choose from regular or chili-cheese nachos, quesadilla triangles, mini taquitos (called “rolled tacos”) and, surprisingly, chicken tenders, which are actually the best of the bunch.

But give up your dreams of a drink after closing time at your local bar. Taco Bell Cantina will serve wine, beer and liquor until only 10 p.m. Sunday to Thursday, and midnight Friday and Saturday. 1439 N. Milwaukee Ave. 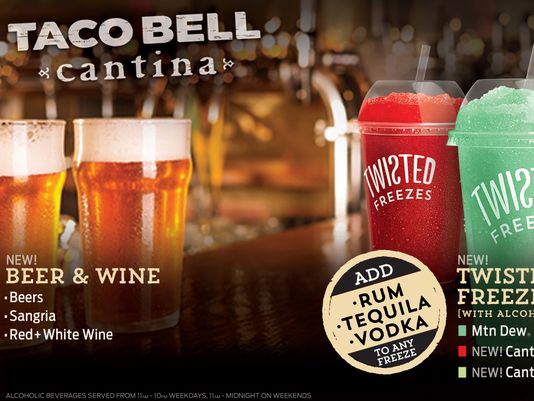 Expect to see Alcohol Justice and the prohibitionists going apoplectic over this news.