Today is the feast day of St. Medard of Noyon, who was also known as St. Medardus (c. 456–545). “He was the Bishop of Noyon. He moved the seat of the diocese from Vermand to Noviomagus Veromanduorum (modern Noyon) in northern France. Medardus was one of the most honored bishops of his time, often depicted laughing, with his mouth wide open, and therefore he was invoked against toothache.” He is also the patron of brewers, as well as vineyards and good harvests. “He is sometimes depicted with a giant eagle hovering over his head to shelter him from rain, while others around him got wet (reputedly this occurred while he was a child.) This led to his association with control over the weather.”

Born c.470 in Salency, Picardy, France; died c.558. Born of a Frankish noble father and a Gallo-Roman mother, Saint Medard was educated at Saint-Quentin. He is also the brother of Saint Gildard, archbishop of Rouen. At 33, he was ordained to the priesthood and became so successful as a missioner that he was chosen to succeed Bishop Alomer in 530 in the see of Vermandois. Medard may have been consecrated by Saint Remigius of Rheims.

According to an unreliable tradition, Medard moved his see from Saint-Quentin to Noyon after a raid by the Huns, then united it with the diocese of Tournai. Allegedly Noyon and Tournai remained under one bishop for 500 years.

Medard is known to have given the veil to Queen Saint Radegund. He is credited with the institution of the old local custom of Rosiere. Each year where his feast is celebrated, the young girl who has been judged the most exemplary in the district is escorted by 12 boys and 12 girls to the church, where she is crowned with roses and given a gift of money (Benedictines, White).

In art, an eagle shelters Saint Medard from the rain, a reference to the legend that this happened when he was a child (Roeder). This may explain the origins of the superstition that if it rains on his feast day, the next 40 days will be wet; if the weather is good, the next 40 will be fine as well (White). He might also be portrayed with two horses at his feet, leaving footprints on stone, or holding a citadel (Roeder). In Medieval art, Medard may be laughing with his mouth wide open (le ris de Saint Medard), and for this reason he is invoked against toothache (White).

Saint Medard is the patron of brewers, peasants, prisoners (Roeder), corn harvests, and vintage (White). He is invoked on behalf of idiots and lunatics, as well as for fruitfulness, both in child-bearing and in the fields, for rains and vineyards, and against bad weather and toothache (Roeder).

Why exactly he’s a patron of brewers or vineyards or good harvests is not very clear, and I can find no satisfactory answer. The only logical assumption may have to do with association with rain, but that’s admittedly a bit of a stretch.

There’s also a Brasserie Saint Médard in France that was founded in 2015 that uses the saint in their logo and on their beer bottles.

Today is the 4th annual holiday celebrating brewers around the world, International Brewers Day, which I created in 2008. While I haven’t been able to put as much effort into it as I might have liked, someday I will. In the meantime, some parts of the international brewing community are carrying on with celebrations, most notably in Australia. For now, a quiet celebration involving beer and any brewer you happen to encounter today is in order.

You could see the original idea, the plan and why I chose July 18 at the old International Brewers Day website, but unfortunately it’s currently down. I’ll have to get that moved and back up again one of these days.

Here was my original driving thought:

Brewers have given so many of us the pleasure of their artistry and enriched our lives with their beer since civilization began. So I think it’s time we recognized their efforts by celebrating their lives, their commitment and their craft. We’re all beer people, but without the brewers what would we be drinking?

Did I mention that hugging brewers is a big part of the holiday? 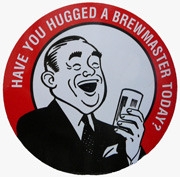 As the old Czech saying goes:

“Blessed is the mother who gives birth to a brewer.“

Today’s work of art is one that I own and is hanging on the wall in my kitchen. It’s by a local artist, Rik Olson, who’s an illustrator as well as a fine artist. Olson has a studio in Sebastopol and I’ve been to it a few times during the annual Sonoma County Art Trails, where artists open up their studios two weekends each year. The title of the work is The Saint of Beer. 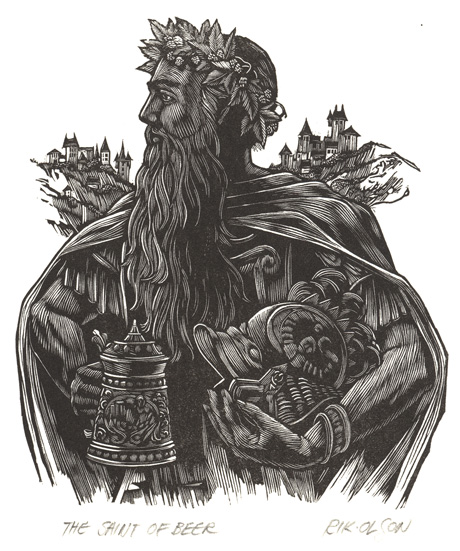 For many years now Rik Olson has created strong graphic illustrations for corporate, advertising, and publishing clients. He is well known for both his black and white and color work in scratchboard, pen and ink, acrylics, linoleum cuts and other media. He is especially well known as one of the few living masters of wood engraving and has taught that art to appreciative students for over ten years. His work also hangs in a number of fine arts galleries, chief among them the Graton Gallery.

Rik’s work has been used for logos, packaging, brochures, advertising spots, textbooks, books, editorial, wine labels, web sites, signs, illustrative maps, and just about any other use you can imagine. 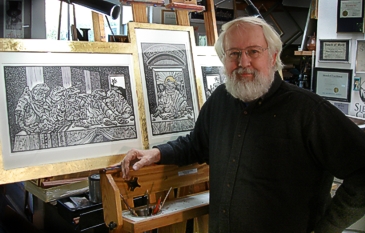 And here’s his biography:

A California native, Rik received his B.F.A. from the California College of Arts and Crafts in Oakland. He has studied under such masters as Barry Moser, John DePol, Richard McLean, and Ralph Borge. He has lived, studied and exhibited in Italy, Germany and the U.S. His influences include the years he lived in Europe and currently the beautiful countryside of Sonoma County, California. He enjoys pushing the envelope in printmaking and has recently been working on editions of multi-color linoleum cut prints. He recently took part in a fund raising event where the works of ten artists, whose over-size prints were printed by an actual steamroller, were featured.

Rik and his wife, Brita, live in rural West County with their two dogs and goldfish. He also participates in ArTrails, the annual artist open studio event in Sonoma County and invites you to visit his studio.

His stuff is great, and he’s become one of a handful of artists we like to visit each year. We’ve also bought several of his linocut prints, one of a starry night seen through trees, a winter moon seen through a bare tree, a Steller’s Jay and some poppies. 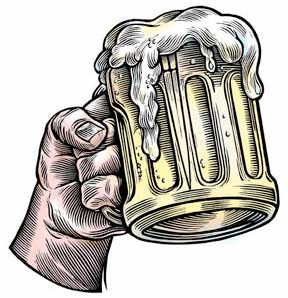 Here’s another one from his gallery, but I’ve never seen this one at his studio.

There’s not much more biographical information online, but there are several online galleries of his work, including these at the website of his agent Ann Koeffler, another rep., Tom Maloney, and at Folio Planet. There’s also a Steamroller print he did for a charity auction that I saw in his studio the last time I was there.