So this looks like it should be fun. There’s a new beer film being released on March 1, which is called Beers of Joy. It apparently follows the journey of four individuals in beer, but two of them are good friends of mine, Tonya Cornett and Sean Paxton.

Below is the press release from yesterday, announcing the film’s release:

Beer. It’s what you reach for after a long day and how you celebrate with friends – and now, it’s the focus of a new feature-length documentary – “Beers of Joy” – debuting worldwide on March 1, 2019. Written and Directed by David Swift and Scott Owen of One-Eleven Entertainment, the film examines the rich history, detailed science and unique personalities of the beer world, and encourages viewers to consider the stories behind their favorite pints. Beer lovers everywhere are invited to celebrate the film when it makes its theatrical debut at select theater locations across the country, as well as on-demand on iTunes, Comcast, Spectrum and more.

From medieval monasteries to historic German villages and all the breweries in between, “Beers of Joy” follows the fascinating journey of four distinctly different characters and how they ultimately converge over a shared enjoyment of the beloved brew, including:

“It’s incredible just how vast the world of beer is. Through all of my studying and experiences, I still feel as though I’ve barely scratched the surface,” said Ryan Daley. “To me, the magic of beer is how it brings people together regardless of how much you know. If you’re sitting with a pint of beer in front of you and enjoying the flavor and the company, then you’re usually in a good spot.”

The concept of what became “Beers of Joy” was first born out of Anheuser-Busch’s desire to create an entertaining film that not only celebrated the beer industry, but told the inspiring stories of the people behind it in a way that would resonate far beyond the world of beer. Producer Jonathan Hack partnered with Popular Mechanics and the award-winning filmmakers at One-Eleven Entertainment, who both shared a passion to create a true love letter to the world’s most popular and oldest fermented beverage. “Beers of Joy” is being distributed worldwide by Gravitas Ventures.

“As Directors and beer enthusiasts, it was an incredible experience for us to discover and document the amazing and compelling stories of the characters in ‘Beers of Joy,'” said David Swift, Writer-Director with Scott Owen, and CEO of One-Eleven Entertainment. “In the film, we are fortunate to have some of the biggest luminaries in the world of beer and brewing from across the globe share their passion, their knowledge and their perspective on this special beverage. We hope ‘Beers of Joy’ and its characters make you love more, laugh more, and learn more than you ever thought you might about humanity’s connection to beer… which you should always ‘Pour with Vigor!‘”

If you read through the press release, you’ll no doubt notice that Anheuser-Busch InBev provided some of the financing for the film, as did Popular Mechanics, too. But even in their own press release, their involvement seems to be downplayed, and they’re the last of the five company’s listed that were part of the making of the documentary. I’m sure there will be some hand-wringing over that, but I’m still keen to see Tonya and Sean and want to give is a fair shake. Neither of them is going to be involved in anything if they’re not comfortable with how it’s being done.

The film will make its theatrical debut during an exclusive showing at Alamo Drafthouse Cinema in Brooklyn, N.Y. on March 1st featuring a Q&A with the cast and filmmakers.

So at least Sean has a good excuse for missing my birthday party the next day, since he’ll be in New York for the premiere. Here is the trailer for the film, which gives a good flavor as to what we can expect from it:

Beers of Joy – Trailer from One-Eleven Entertainment on Vimeo.

Here’s an interesting look at the history of hops in Oregon’s Willamette Valley, the second-largest growing area for hops in America. Although the production values remind me of an elementary school slideshow presentation, complete with monotone narrator, there’s a lot of good information nonetheless. Based on some of the information presented, I’d guess it was made in the pre-craft era before 1980, but when exactly is anybody’s guess. All told, the three parts of the documentary run a little less than 30 minutes. Thus endeth the lesson for today. 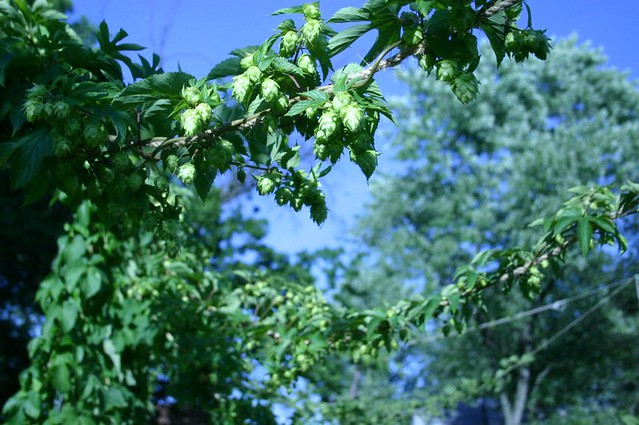 This looks interesting. Jeff Smith and Fran Ellsworth are directing and producing a new documentary film about California breweries entitled “Craft: The California Beer Documentary.” They recently released their first trailer, which you can watch below. All I know at this point is from a short description of their project. “A road trip throughout California, learning from the master brewers of the state. It’ll also feature interviews with beer enthusiasts and home-brewers.”

Today’s beer film is trailer for Beoir: A Tale of Irelands Craft Ale which looks like it could be a very interesting, cool film about Ireland’s growing craft beer scene. Here’s the description of the film:

Today’s beer film is an episode about Vermont craft beer done by Vermont Public Television. This episode is from 2013 and features the http://www.fiddleheadbrewing.com/ in Shelburne, Vermont.

Today’s beer film is an episode about Vermont craft beer done by Vermont Public Television. This episode is from 2013 and features the Rock Art Brewery in Morrisville, Vermont.

Today’s beer film is an episode about Vermont craft beer done by Vermont Public Television. This episode is from 2013 and features the Hill Farmstead Brewery in Greensboro Bend, Vermont.

Today’s beer film is an episode about Vermont craft beer done by Vermont Public Television. This episode is from 2013 and features the Alchemist Brewery in Waterbury, Vermont.

Today’s beer film is an episode of Local Brew, Episode 2 featuring a visit to Maine Beer Company in Lewiston, Maine. It was completed in 2012, but they apparently only did two shows.

Today’s beer film is an episode of Local Brew, Episode 1 featuring a visit to Baxter Brewing in Lewiston, Maine. It was completed in 2012, but they apparently only did two shows.