Just in time for Trump’s first visit to foreign countries as President of the U.S., a Ukrainian brewery, Pravda Beer Theatre, has just announced the release of a new beer, a 7.2% a.b.v. beer called “Trump.” On the website, it’s initially referred to as a “blonde” although on the label it’s listed as an “Imperial Mexican Lager.” Here’s the description from the brewery’s website:

And here’s the label, where Trump is said to be the President of the Divided States of America:

From what I can tell about their portfolio of beers, they like to have a bit of fun with both their beer and the labels for them. This may be their first political beer, but it doesn’t appear to be their last, as several more are listed as “Upcoming” or “Maybe in Future.” UPDATE: I’ve heard from brewmaster Cory McGuinness, who wrote to me to let me know that in fact all four of their political series beers are, in fact, available now. Apparently, with English being not their first language, the English-language portion of the website has not been updated recently.

So the first beer in their politicam series is Frau Ribbentrop, a 4.5% Belgian Wit featuring German chancellor Angela Merkel:

Does anyone want to bet that Trump will be most upset about this because Putin’s beer is stronger than his?

Today’s infographic shows the beer market worldwide in 2010, created by Alexander Antoshkiv on March 25, 2011. The language of the infographic is Ukranian — Ринок пива 2010. Інфографіка — and today is their Independence Day.

Today’s infographic is an interesting one, although it’s somewhat unusual. It may prove useful, however, the next time you find yourself in the Ukraine. Entitled For Every Thirst, a Beer, it comes from an article by Oleksandr Yarmola, “the leader of folk rock band Haydamaky,” as he “tours Ukraine mapping breweries that produce unpasteurized “live beer.” It almost makes me want to go there. 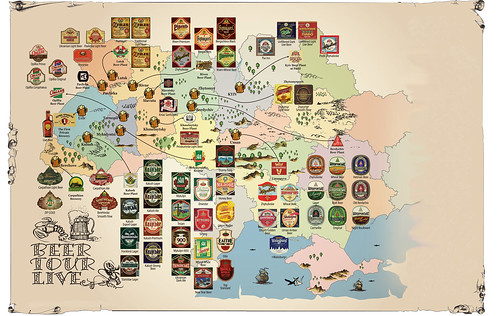 Canada’s Random House Publishing runs an interesting website called Hazlitt, where, presumably, they feature their own authors on a variety of topics. The one that caught my attention was by Linda Besner, and it’s an essay about My Best Friend, beer.

She begins by claiming that mankind has been “thinking and talking about beer since 4000 B.C.” She’s only off by as much 5,500 years, since brewing is believed to have begun with the “advent of agriculture in the Neolithic Period of the Stone Age about 11,500 years ago.” I don’t want to dwell on that, because we haven’t even gotten to the meat of it, but it did make me initially skeptical.

The story concerns a study that examined beer commercials from both the U.S. and the Ukraine, described as a “cross-cultural study of beer’s metaphors.” Again, I’m quibbling a bit, because the researchers looked at a total of 37 ads from both nations, not exactly a large number, but the author credits them with having “seen a lot of beer commercials.” I think the average consumer might see nearly that many during the average football game, or certainly over the course of a Sunday watching sports in general. But okay, let’s let them make their point. What did they find?

In the Ukrainian commercials, the study notes, “people do not become friends by sharing beer; rather beer drinking occurs among individuals who are already established as friends, which entails a close and trusting relationship.” The people drinking beer together are described as druh, which Dr. Lantolf translates as being like the English concept of “best friend,” rather than tovarysch, which translates as “comrade” or “acquaintance.”

In the United States, it’s almost the opposite. Apparently, we use the term “friend” rather loosely, calling people we hardly know, or have just met, our friends. In other words, many of our friends are more superficial, at least compared to how Ukrainians see them.

To illustrate, they give the example of a Budweiser commercial currently up on YouTube under the name “Magic Beer.” A young man sits alone at a bar, opening a bottle. He pours it into his glass, but, miraculously, once the glass is full, beer continues to spill forth. Quickly, he pours some of the excess beer into the glasses of the men next to him. In the next shot, the bar is packed with carousers dancing to a live Scottish band as beer continues to gush from the magic bottle. The erstwhile lonely young man dances between his new friends, a beatific look on his face. Then he drops the bottle. It smashes on the floor, and the flow of beer trickles to nothing amid ghastly silence. The outraged people around him glare daggers. Those closest to him turn and walk away.

Frankly, I hate these ads. They’re not just superficial, they’re utterly ridiculous. Saying they’re depicting how typical Americans act, or view friendship, seems like quite a leap. I think it says more about the advertisers than the consumers, and maybe even a little about the researchers that they think idealized commercials reflect real life.

Even if I accept the premise, that that may be how some people see their “friends,” I’ve never considered such people my friends. Fair-weather friends, perhaps, but that’s a rather derogatory expression. Is it possible I’m not typical? No, I don’t think so, because I’m pretty sure most of the people I know well feel roughly the same way.

I love beer. I make my living writing about it, reviewing, analyzing it, along with the people and companies who make, sell and market it. I have admittedly made friends, to varying degrees, with actual people who work in the industry. But I’d never mistake the beer itself as my friend. It’s an inanimate object, after all. I may love beer, but in the same way I love potato chips or frites. It’s not the same as another person. Doesn’t everyone know the difference?

Not according to the study, apparently. To wit:

It seems that not only do Americans see beer as a person, they see beer as a person other people like better than them. In this scenario, beer is the cool friend you bring to the party who makes you popular by association. As soon as your cool friend leaves, no one wants to hang out with you anymore. It’s doubtful, Dr. Lantolf says, that the producers of “Magic Beer” and other commercials are consciously depicting shallow friendships: “I think that what they were showing is how Americans typically behave.: Dr. Bobrova is originally from the Ukraine, and she says, “I didn’t expect that American commercials would show this superficial concept of American friendships. I have many friends in the U.S. and we spend time together and I share everything with them as with Ukrainian friends. But commercials show a little bit of a different picture. But then,” she adds, “I’m not a beer person.”

Should I be insulted by that? I’m really not sure. I don’t believe that’s “how Americans typically behave.” Sure, there are certainly superficial people in the world, and I’d be willing to accept that a lot of them live here in the States, but I don’t think it’s something most people aspire too. I don’t think Americans view superficiality as a positive attribute. So when the researchers say they think “Americans see beer as a person,” it’s the people in the commercials who may “see beer as a person,” but they’re not real. They’re actors. It’s not the same thing. The advertisers are projecting an image onto the characters to sell us something. It’s not necessarily a reflection of real people, or real life. Am I off base here?

I know many Canadians quietly don’t think too much of their neighbors, and there are certainly times when I agree with them, at least about how we sometimes behave and view the world. But this one I just don’t quite understand. The author of the piece, Linda Besner, is a poet from Quebec who recently published her first collection, The Id Kid. And they may be fine poems, “sassy and sumptuous,” as her publisher describes them, but I can’t help but think she doesn’t know human nature as well as she might think. But the researchers have even more to answer for, since they’re from the University of Pennsylvania, the same school where Patrick McGovern, author of Uncorking the Past, does his research and teaches.

In the end, however effective advertising can be, I tend to think most people know the difference between it and real life. My old hometown beer — Reading Premium Beer — used to advertise with the wonderful slogan: “The Friendly Beer for Modern People.” I love that phrase, but it’s utterly meaningless. I don’t think beer can be friendly, any more than my cat actually likes me when I rub her belly. Oh, sure, it looks likes she’s smiling, but I know she really thinks of me as the hired help. But actual personification, or anthropomorphisation in the case of my feline companions, of beer is ultimately just as futile. It’s just the advertisers trying to project — maybe that needs a new word: advermorphisation — human characteristics onto inanimate objects. Beer will never be my BFF. The people I drink beer with? Those are my people, my true BFFs. 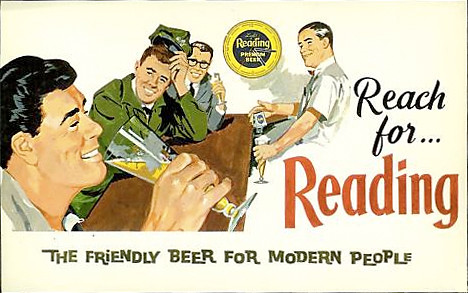 Today in 1918, the Ukraine declared their Independence from Soviet Russia and unified the same day, a year later in 1919. 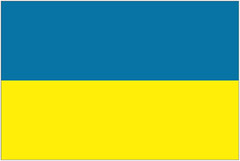 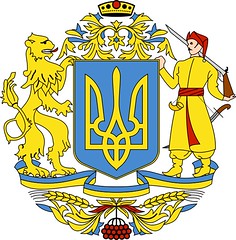 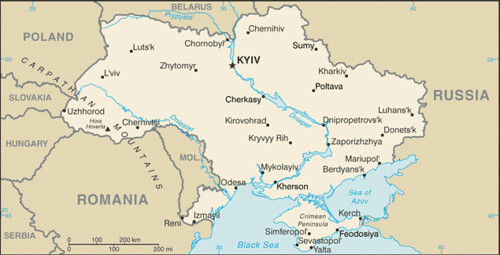 Today’s painting is done using a unique technique, reverse painting on glass. It’s an ancient process, and today’s artist, Andriy Khomyk, is from the Ukraine where at one time it enjoyed more popularity. According to his website. “No other medium allows for the creation of such deep and energetic color! Painting is done on the reverse side of the pane — the work is viewed through the layer of glass, which produces amazing effects!” You can also read more about painting on glass on Khomyk’s website. The title of the painting below is Drinking Beer. 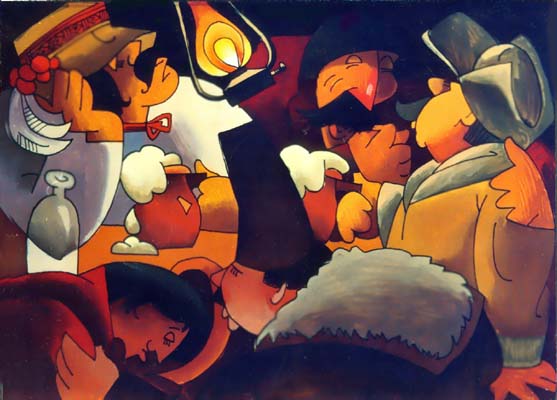 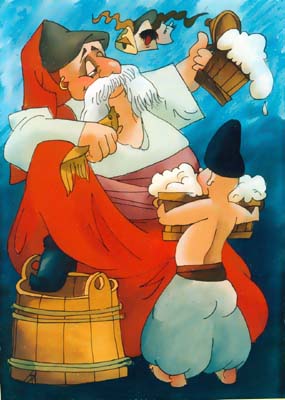 You can see many more of his painted glass artwork at the gallery on his website.