Today is the 86th birthday of Bob Uecker, who is an “American former Major League Baseball player and current sportscaster, comedian, and actor. Facetiously dubbed ‘Mr. Baseball’ by TV talk show host Johnny Carson, Uecker has served as a play-by-play announcer for Milwaukee Brewers radio broadcasts since 1971. He was honored by the National Baseball Hall of Fame with its 2003 Ford C. Frick Award in recognition of his broadcasting career.” But he is best-remembered, beerwise, for his humorous commercials in the 1980s for Miller Lite beer. 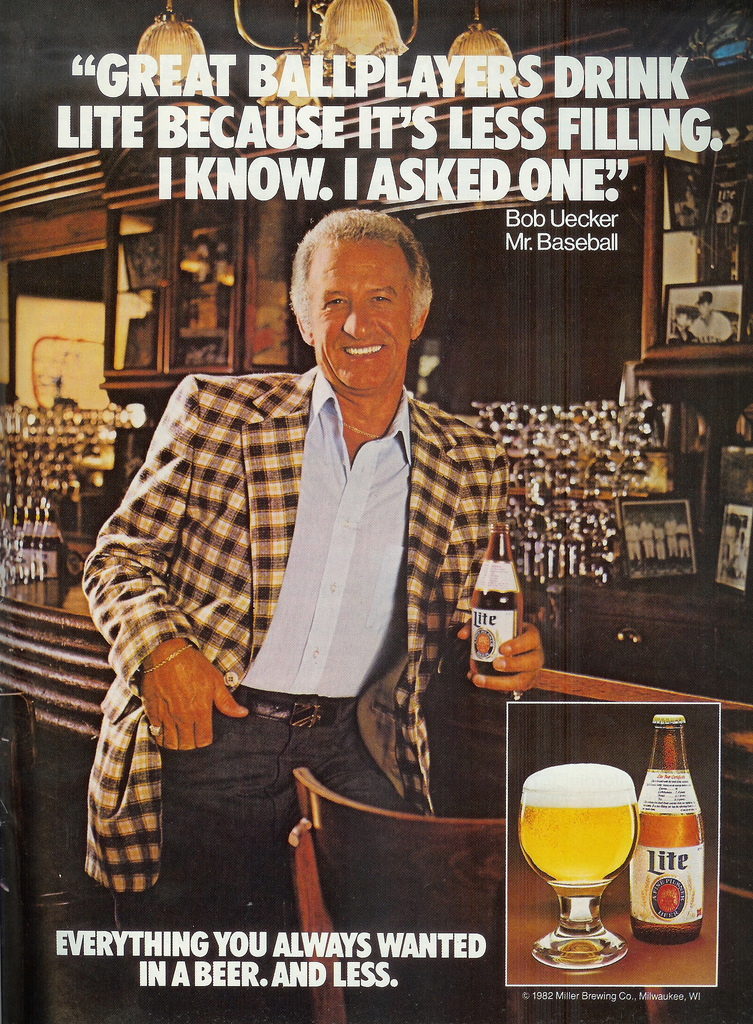 This is his biography, from his Wikipedia page:

Though he has sometimes joked that he was born on an oleo run to Illinois, Uecker was born and raised in Milwaukee, Wisconsin. He grew up watching the minor-league Milwaukee Brewers at Borchert Field. He signed a professional contract with his hometown Milwaukee Braves in 1956 and made his Major League Baseball debut as a catcher with the club in 1962. A below-average hitter, he finished with a career batting average of .200. He was generally considered to be a sound defensive player and committed very few errors in his Major League career as a catcher, completing his career with a fielding percentage of .981. However, in 1967, despite playing only 59 games, he led the league in passed balls and is still on the top 10 list for most passed balls in a season. At least a partial explanation is that he spent a good deal of the season catching knuckleballer Phil Niekro. He often joked that the best way to catch a knuckleball was to wait until it stopped rolling and pick it up. Uecker also played for the St. Louis Cardinals (and was a member of the 1964 World Champion club) and Philadelphia Phillies before returning to the Braves, who had by then moved to Atlanta. His six-year Major League career concluded in 1967.

Perhaps the biggest highlight of Uecker’s career was when he hit a home run off future Hall of Famer Sandy Koufax, after which Uecker joked that he always thought that home run would keep Koufax from getting into the Hall of Fame. 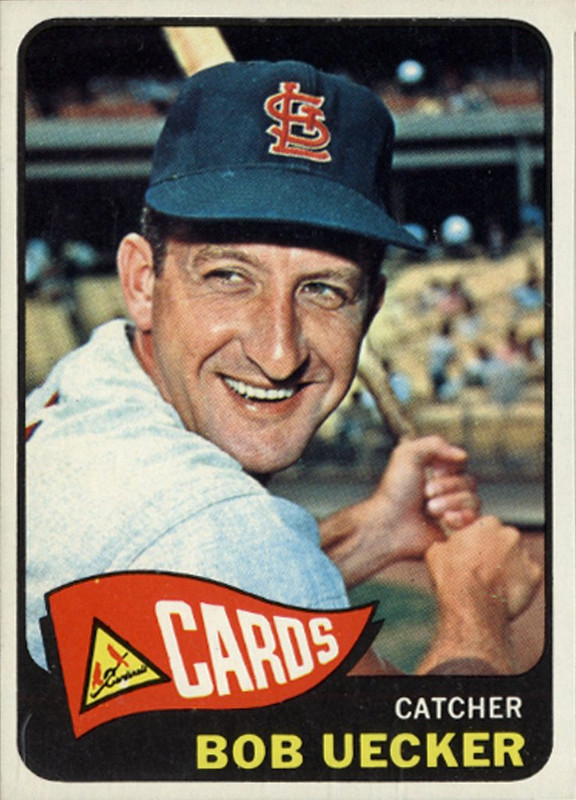 After retiring as a player, Uecker returned to Milwaukee. In 1971, he began calling play-by-play for the Milwaukee Brewers’ radio broadcasts, a position he holds to this day. During his tenure, he has mentored Pat Hughes, Jim Powell, Cory Provus and Joe Block, all of whom became primary radio announcers for other MLB teams. For several years he also served as a color commentator for network television broadcasts of Major League Baseball, helping call games for ABC in the 1970s and NBC (teaming with Bob Costas and Joe Morgan) in the 1990s. During that time, he was a commentator for several League Championship Series and World Series.

As of 2016, Uecker teams with Jeff Levering to call games on WTMJ in Milwaukee and the Brewers Radio Network throughout Wisconsin, save for some road trips which he skips; for those games Lane Grindle substitutes for Uecker on the radio broadcasts. Uecker is well known for saying his catchphrase “Get up! Get up! Get outta here! Gone!” when a Brewers player hits a home run.

Known for his humor, particularly about his undistinguished playing career, Uecker actually became much better known after he retired from playing. He made some 100 guest appearances on Johnny Carson’s Tonight Show. During one Tonight Show appearance Carson asked him what the biggest thrill of his professional baseball career was and with his typical dry wit Uecker replied, “Watching a fan fall out of the upper deck in Philadelphia; the crowd booed.” Most of his wisecracks poked fun at himself. He once joked that after he hit a grand slam off pitcher Ron Herbel, “When his manager came out to get him, he was bringing Herbel’s suitcase.” On another occasion, he quipped, “Sporting goods companies would pay me not to endorse their products.” On his later acting career, he commented, “Even when I played baseball, I was acting.”

Uecker also appeared in a number of humorous commercials, most notably for Miller Lite beer, as one of the “Miller Lite All-Stars”

Here’s a selection of some of Uecker’s commercials for Miller Lite:

Another one from 1988, promoting the Olympics:

Tuesday’s ad is for Natural Light, from 1980. Today is the birthday of baseball legend Mickey Mantle. In the mid-1970s, Mantle did some commercials, along with fellow Yankees teammate Whitey Ford, for Miller Lite. So when he did this ad for rival Natural Light, they played up his being a switch hitter “who switched to Natural Light.” 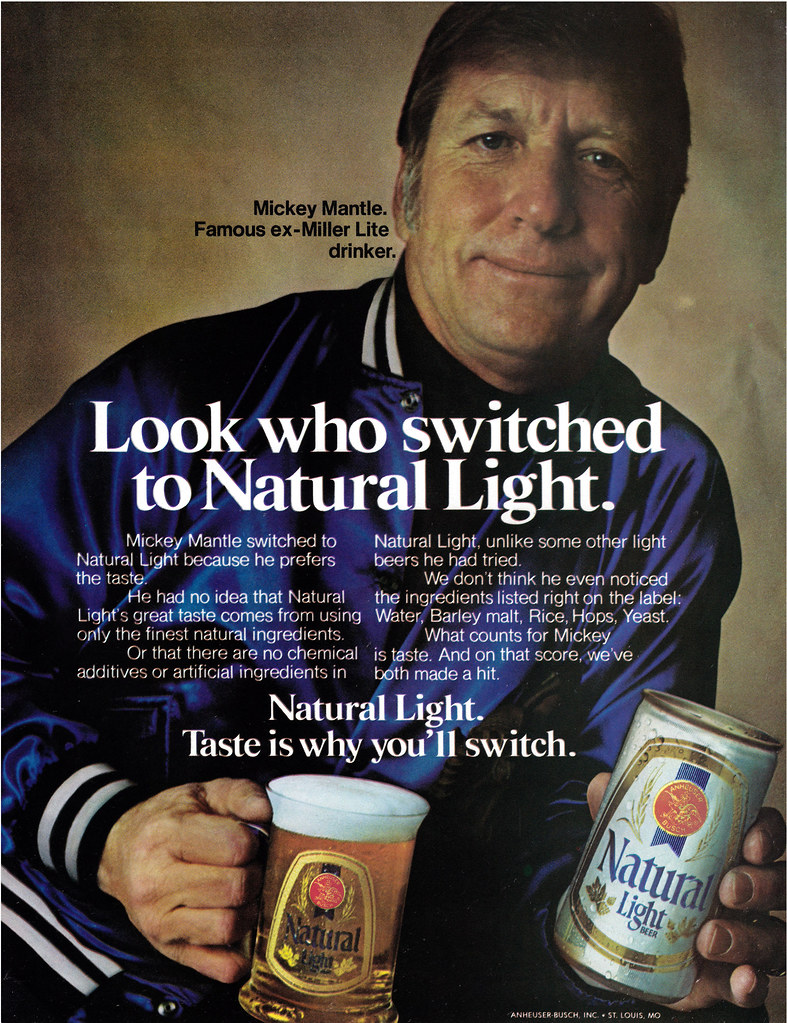 Today in 1982, US Patent 4355047 A was issued, an invention of William F. Line, Vinod K. Chaudhary, Etzer Chicoye, and Robert J. Mizerak, assigned to Miller Brewing Company, for his “Method of Preparing a Low Calorie Beer.” Here’s the Abstract:

Low calorie beer is prepared by introducing into the brewing process a debranching enzyme (pullulanase) obtained from rice, a traditional brewing material. The debranching enzyme reduces the real extract of the beer by cleaving alpha 1,6 linkages of unfermentable limit dextrins to form alpha 1,4 dextrins which can be converted by alpha 1,4 carbohydrates to sugars that can be fermented by brewer’s yeast. The enzyme may be introduced into the brewing process by adding rice or the enzyme extracted from rice to the mash or to the wort before or during fermentation. The debranching enzyme may be obtained from polished dry milled rice by extraction with an aqueous buffer solution. When malted rice is used as the enzyme source a particularly useful mixture of the debranching enzyme and alpha 1,4 carbohydrates is obtained. 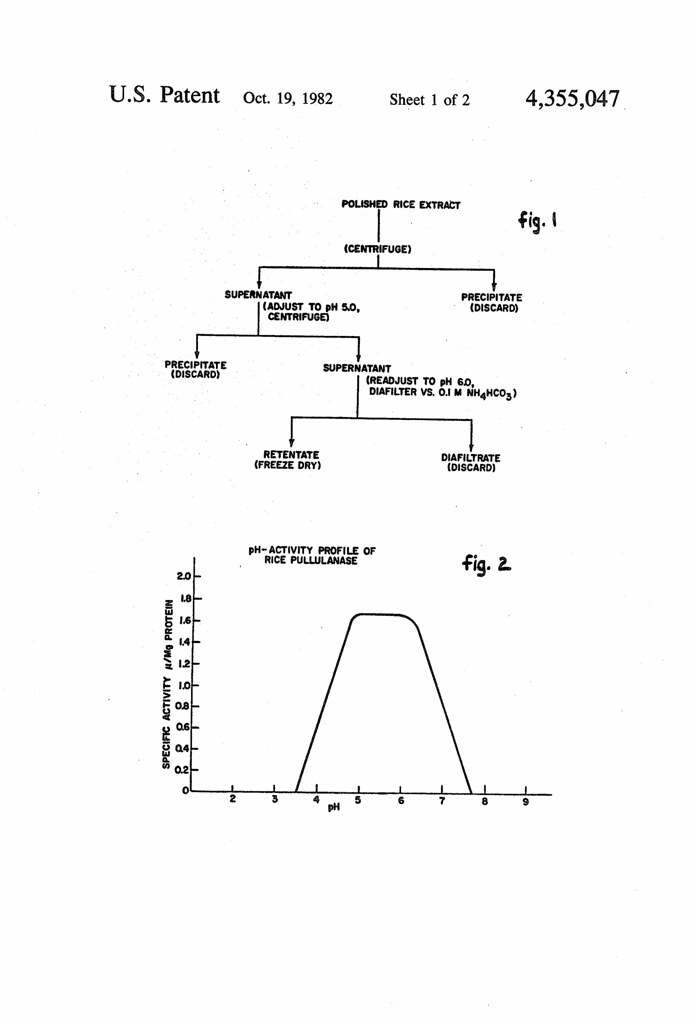 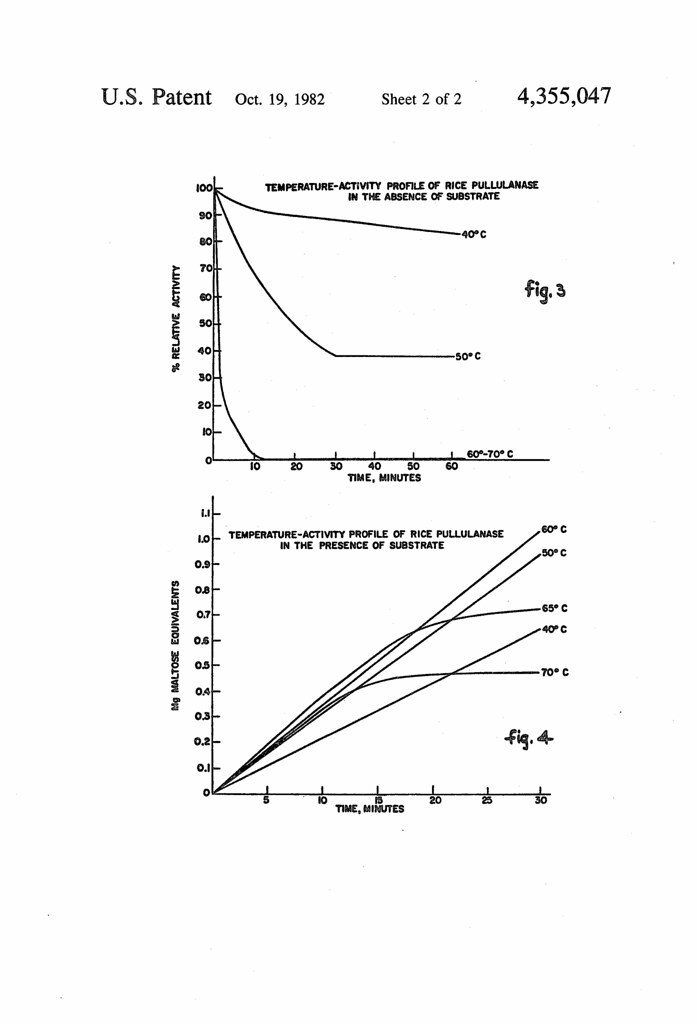 Today in 1989, US Patent 4837034 A was issued, an invention of Joseph L. Owades and Charles J. Koch, assigned to the Boston Beer Limited Partnership, for their “Preparation Of Low Calorie Beer.” Charles J. Koch was Boston Beer founder Jim Koch’s father, himself a fifth-generation brewer who apparently quit the business in the 1950s when things were looking dark for American beer and even tried to dissuade his son from going into the family business. According to family legend, “his greatest gift [to the Boston Beer Co.] lay in an old trunk stored in his attic. That trunk contained family brewing memorabilia and beer recipes dating back to the 1800s.” And the story goes that he gave Jim a recipe from the trunk created by his great-great grandfather, Louis Koch, which was the basis for their flagship beer, Samuel Adams Boston Lager. Joe Owades was the first to create low-calorie light beer when he was at Rheingold and eventually through M&A it turned into Miller Lite and later in life he did consulting work and helped Boston Beer tweak the Louis Koch’s recipe and make it into their Boston Lager. As I understand it, Owades continued to do work with them from time to time over the years, and that’s likely how Joe and Charles ended up working on the patent which, I presume, eventually became Samuel Adams Light Beer.

A low-calorie, all-malt beer characterized by full body and flavor of a conventional all-malt beer and a method of preparing the same without any external enzymes is described. A wort is prepared by blending warm malt mash with hot water under conditions which avoid exposing the blend of hot water and the malt mash to temperature between about 52° C. and 75° C., and the resultant wort is converted to beer by fermenting the wort with Brewer’s yeast. The wort extract is oxygenated with substantially pure oxygen in place of air normally used in the fermentation, and the Brewer’s yeast is added to the wort extract at a rate of about 30 to 60 grams pressed yeast per 100 liters wort so as to absorb, within the yeast cells of the Brewer’s yeast, substantially all harsh and grainy flavor compounds contained in the wort extract. 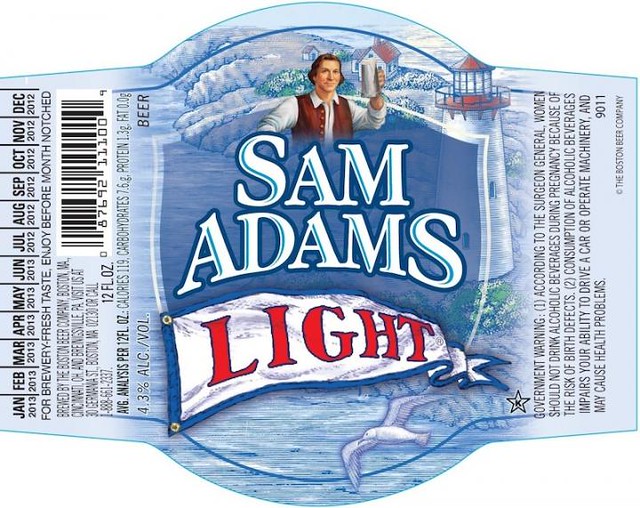 Today in 1991, US Patent 5021246 A was issued, an invention of Roger L. Sieben and Klaus D. Zastrow, assigned to Anheuser-Busch, for their “Step Mashing Process For Producing Low Alcohol Beer.” Here’s the Abstract: 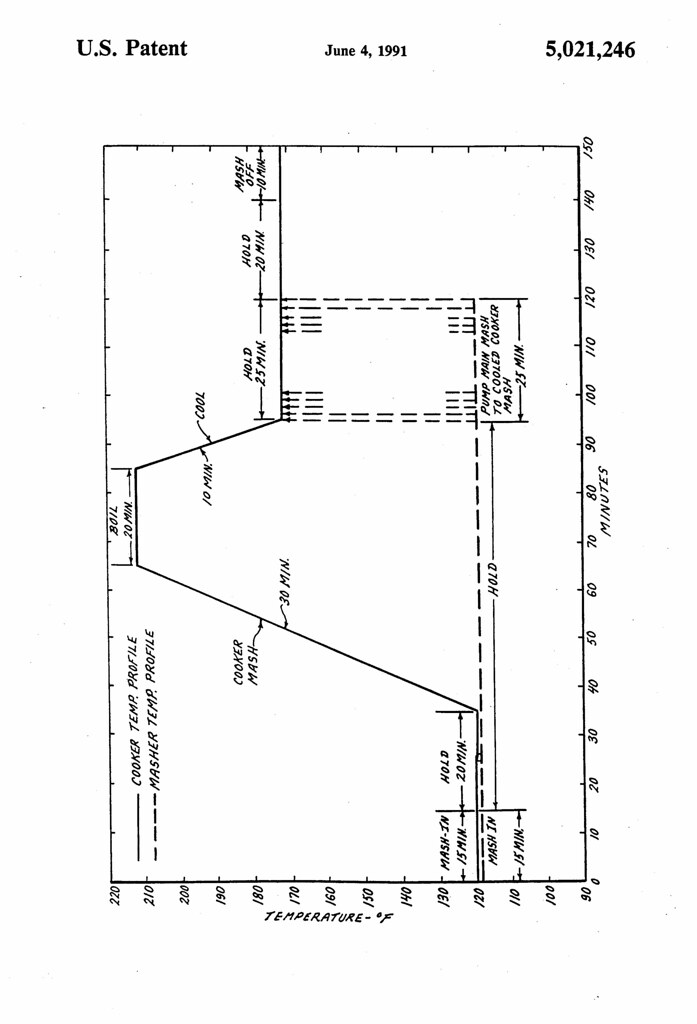 Today in 1979, US Patent 4138499 A was issued, an invention of Karl M. Strauss, Harold H. Geller, and Bernard J. Wagner, assigned to Pabst Brewing Co., for their “Preparation of Beer with Reduced Calories.” Here’s the Abstract: 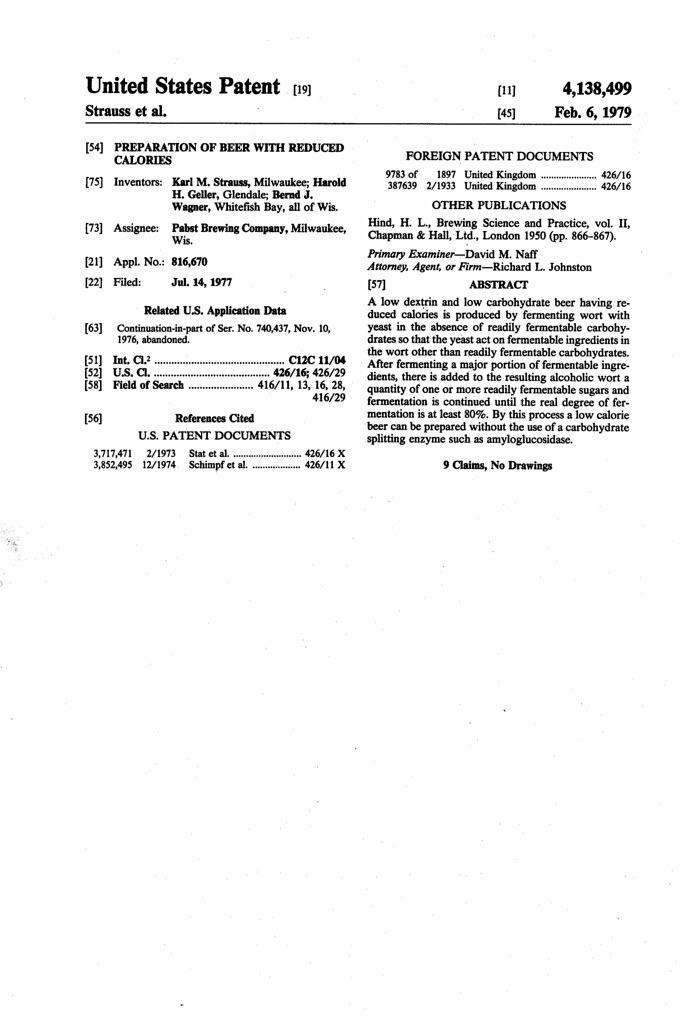 Monday’s ad is Miller Lite, from 1982. Today is also the birthday of Mr. Baseball, Bob Uecker, who arguably was at least partially responsible for the success of lower-calorie diet beers with his wildly successful ads for the beer in the 1980s. It was a marvel of modern advertising and I’m still amazed to this day that it worked in convincing people to drink an even more watered-down version of the macro lagers of the day. But Uecker was certainly great in the ads, and I loved him in the “Major League” movies, too. 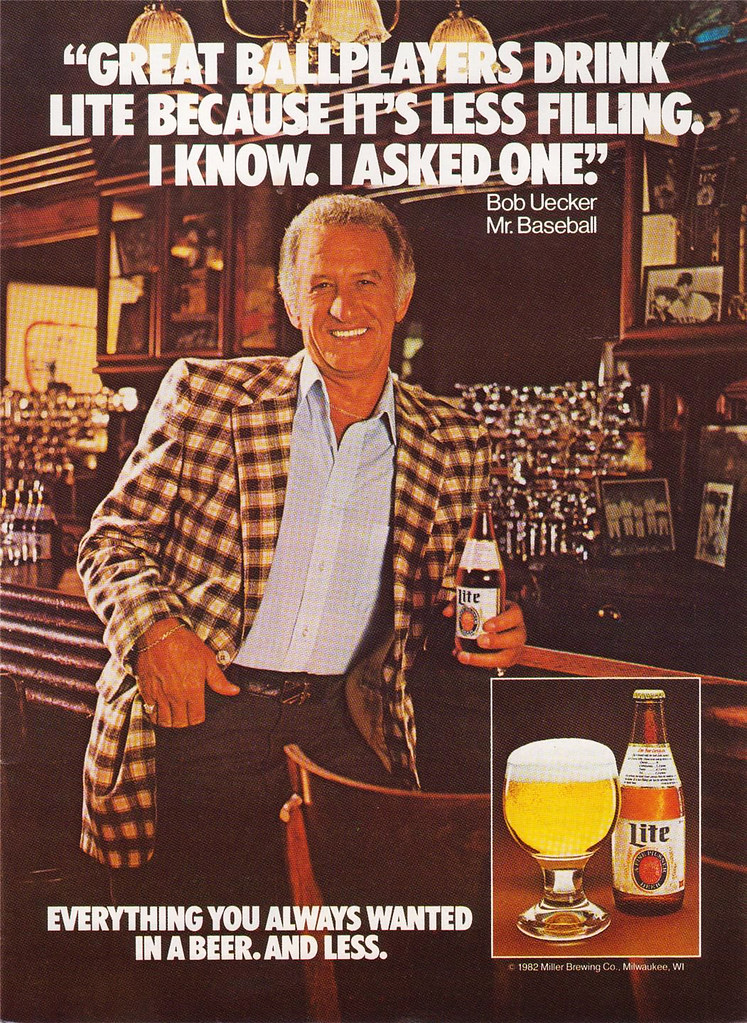 These always give me a chuckle. Whenever sales are flagging, one of the strategies employed by the bigger beer companies to reverse their fortunes is to change the packaging. Earlier this month, Miller sent out a press release, “Celebrate Miller Time with the Light Beer that Started It All.” They’re bringing back the original can design for Miller Lite, their unnatural abomination of a diet beer. My thoughts on low-calorie light beer are very opinionated, and none too positive, for example read Disrespecting Low-Calorie Light Beer and No Defense For Light Beer.

The Original Lite Can features the familiar images of hops, barley and the words “a fine pilsner beer,” which reinforce the high quality ingredients and the unique brewing process that consumers have enjoyed for generations.

“There was a time when all that existed was heavy beer that weighed you down,” said Elina Vives, marketing director for Miller Lite. “The launch of Miller Lite broke this category convention and offered beer drinkers the best of both worlds, great taste at only 96 calories and 3.2 carbs. Miller Lite is the original light beer and this limited-edition can celebrates that innovation and helps inform consumers of the rich history behind our beer.”

In addition to becoming available to consumers in January, the Original Lite Can will appear in the upcoming Paramount Pictures’ release, Anchorman 2: The Legend Continues. The news team can be seen enjoying the Original Lite in the film, which will be released nationwide December 18.

The limited-edition Original Lite Can will be available nationwide January through March in 12-, 16- and 24-ounce sizes.

All well and good, but sheesh, why not just make a beer that people would want to drink, not one you have to market and advertise to death to create demand? Can people really be nostalgic for that can design? But that seems to be used a marketing tactic every few years, to change the package, the label or something along those lines. It’s indicative of a culture that’s long ago abandoned the importance of what’s inside the package and instead has been concentrating on the external. Sure, how the packaging looks is important, but it’s not more important than the beer, and for big beer companies it surely seems like marketing has trumped any other concerns for many, many years.

Calling it a “Pilsner beer,” of course, strains the notion of what a pilsner is.

Today’s infographic is aimed essentially at college students to warn them about the perils of drinking light beer, a worthy subject given my personal disdain for low-calorie, low-flavored diet beer.

Regular readers of the Bulletin know my feelings about low-calorie light diet beer, so this poster by Lucky Bucket Brewing in Nebraska gave me quite a chuckle. “We didn’t repeal Prohibition so we could drink light beer.” Amen, brother. Truer words were never spoken. Happy Repeal Day, everybody. 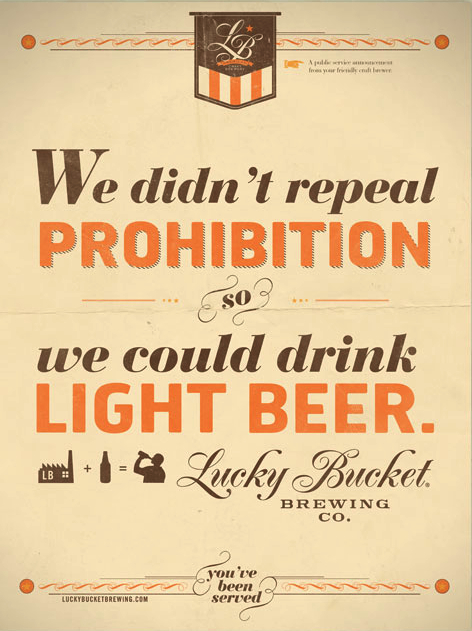