Friday’s ad is for the Columbia Brewing Co. of St. Louis, Missouri, from 1896. I love these old 19th century ads that were such artistic marvels. It’s hard not to love such patriotic posturing, trying to rule the world of beer. 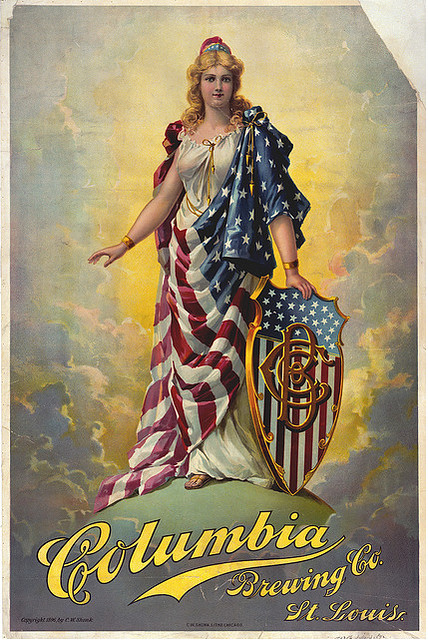 Today’s infographic is from Orchestrated Beer, which is business management software for craft breweries. They created the infographic below to visually show what their software can help breweries do, showing the supply chain from farm to consumer. 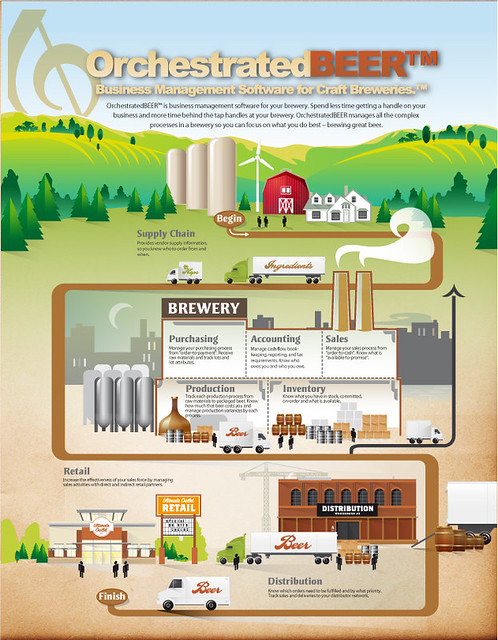 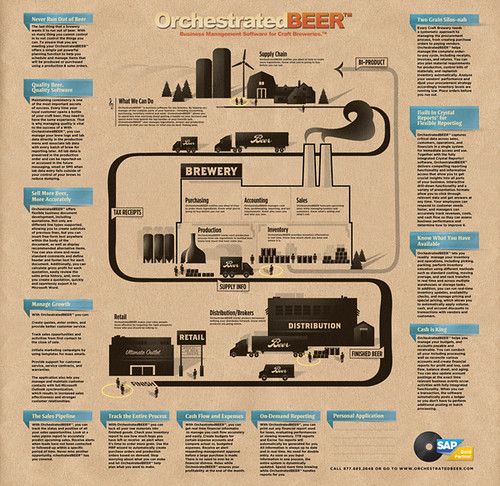 Thursday’s ad is for the Anheuser-Busch Brewing Association, from the 1890s. I love these old 19th century ads that were such artistic marvels. Though I confess I’m not sure why there’s a baby about to fall, but who’s still hanging on to their empty glass. 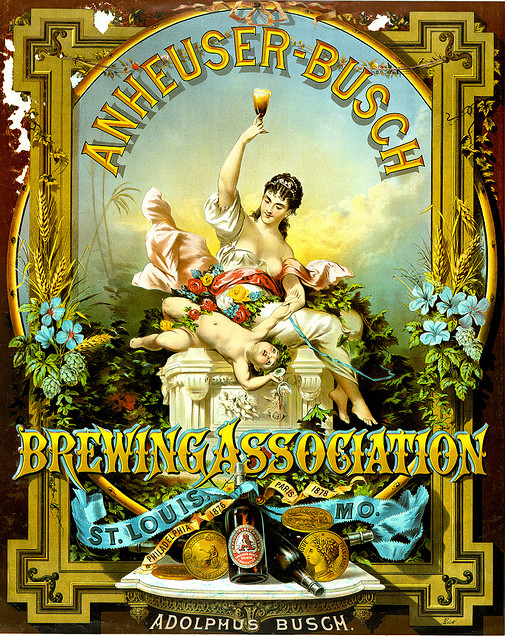 Here’s an interesting development. In hindsight it’s probably inevitable, especially given the sheer number of breweries in planning. There’s a new crowdfunding website that just launched. It’s called CrowdBrewed, and as its name implies, it’s specifically aimed at helping potential brewers and brewery owners raise the money they need to get started. It appears to work like Kickstarter, just with an emphasis on breweries.

Personally, I love Kickstarter. So far I’ve backed well over 100 projects through the crowdfunding website, and a few more on other similar ones. I find the idea of crowdfunding appealing, though I’ve spoken with plenty of people who feel otherwise, and they’re welcome, of course, not to participate. But if you like helping others or feeling like a small part of something you find worthwhile, take a look. Kickstarter is the king, at least for now, but there’s also Indiegogo, RocketHub, GoFundMe and many more.

As for beer, searching for it on Kickstarter reveals 311 results, so there’s certainly a ready base of potential folks for CrowdBrewed. I’ve sponsored more than a few brewery and beer-related projects, and since I’m drawn to them, it might be nice to have a single place to see what people are trying in the world of beer. Will it work, catch on, and help get some breweries started? Only time will tell.

Today’s infographic is a simple Beer Styles poster, divided into ales and lagers, with just five of each. At the bottom there are also three hybrids (not marked) and hard cider. Still, if you knew nothing, this would be an okay place to start your education. 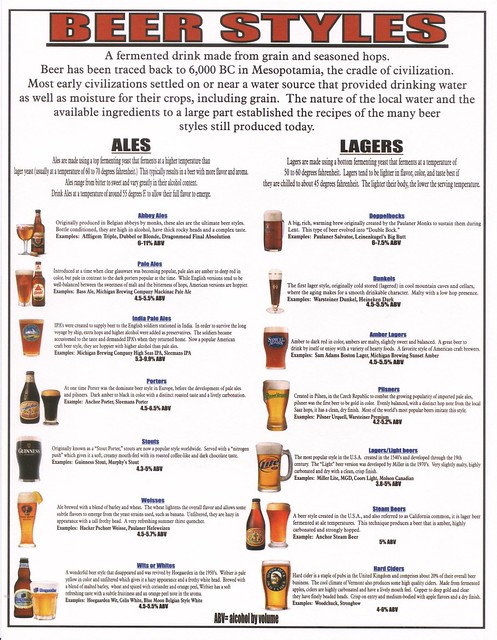 According to Inside Scoop SF, a new brewery to be named Phantom Coast Gastropub and Brewery has signed a lease for 5,000-square feet in the Tenderloin. The specific address is 65 Taylor Street, which used to house the Sixty-Five Club. According to the article, “The guys behind the project are Keith Wilson and Casey Gray, who own Tope in North Beach together; Wilson also owns the Boardroom in North Beach. But according to Wilson, a bigger gastropub and brewery project has always been the goal.” There’s not much else that’s been revealed yet, other than this.

Phantom Coast — a moniker stemming from a name that they saw on a vintage San Francisco map of the bay-side waterfront — will focus on West Coast beer and wine. Wilson and Gray are going to brew their own beer, but with at least 75 taps (!) on the premises, they will also highlight West Coast craft breweries and local wineries. Everything — both beer and wine — will be served on tap, Wilson says, thereby minimizing waste and passing on savings to customers.

Their plan is to have live music — with the hope that the city can help out with the permitting process there — and create a raucous, “Bavarian-style” atmosphere with big tables and communal seating. There will be food, too, with housemade sausages, housemade pretzels, salads, sandwiches and more. 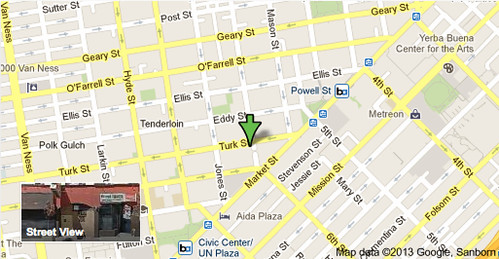 Wednesday’s ad is for Schafer, from 1948. Yesterday, Porter and I just watched Blazing Saddles — me for the umpteenth time and Porter for the very first time — so a Hedy Lamarr (“that’s Hedley!“) seemed the perfect ad for the day. 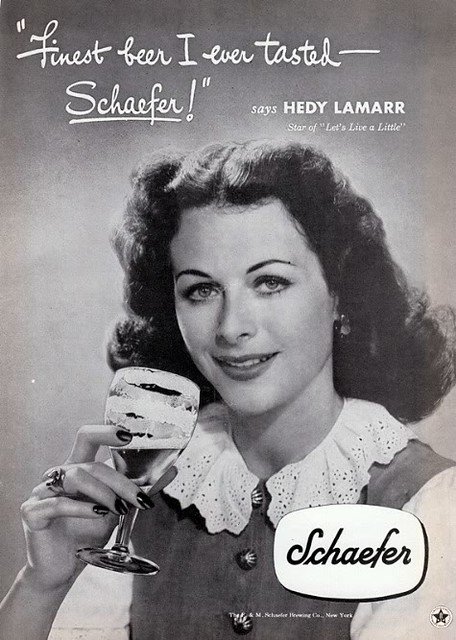 Last Thursday, I helped the San Francisco Brewers Guild put together a fun event at the Old Mint with Flipside and the San Francisco Museum and Historical Society called Hops and History. My part during the event included being the moderator of a panel discussion about opening and running a brewery in the city of San Francisco. 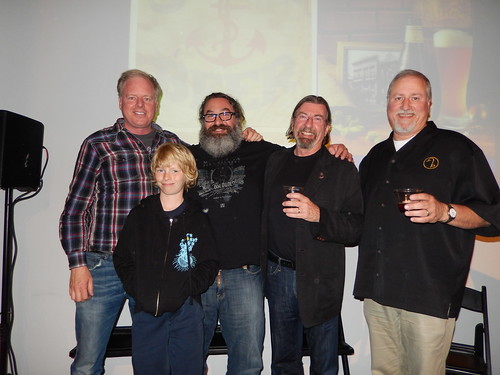 Shaun O’Sullivan (21st Amendment), Shaun’s son Ryan, Dave McLean (magnolia), Keith Greggor (Anchor) and me. Below is the audio of our discussion.

One of my favorite parts of the evening was a gallery showing of local breweriana, provided by my friend Ken Harootunian, along with some pieces from Anchor Brewing and some labels from SF Brewers Guild executive director Brian Stechschulte.

Below are a few highlights from the gallery: 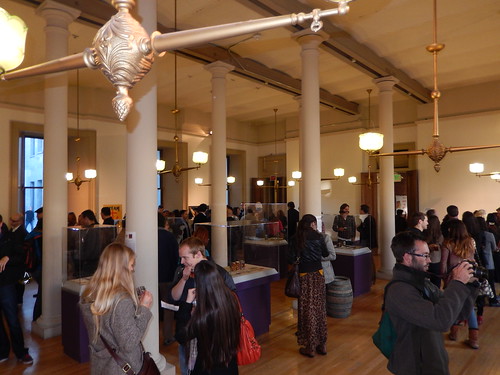 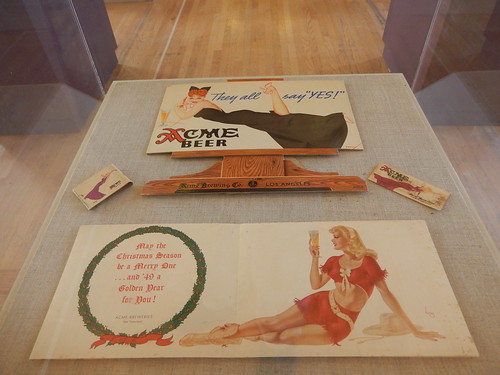 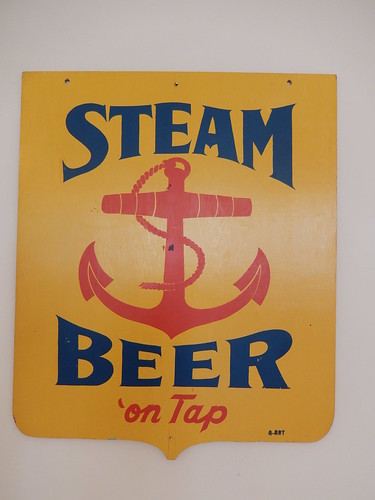 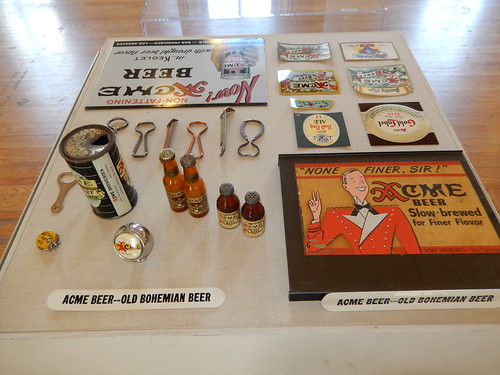 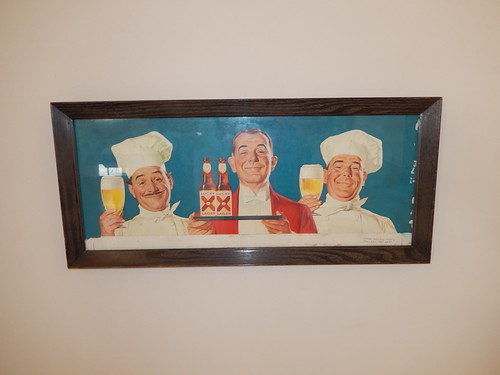 The original artwork from a Lucky Lager ad. 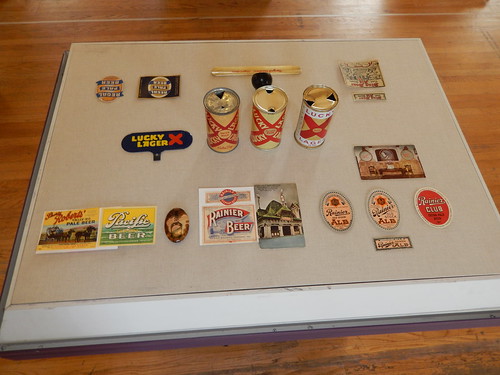 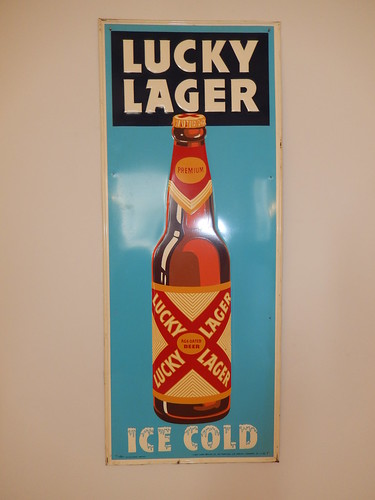 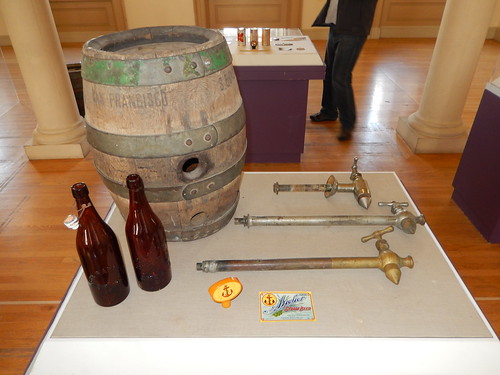 An old, pre-Prohibition, wooden keg and taps from Anchor, along with some additional steam beer artifacts. 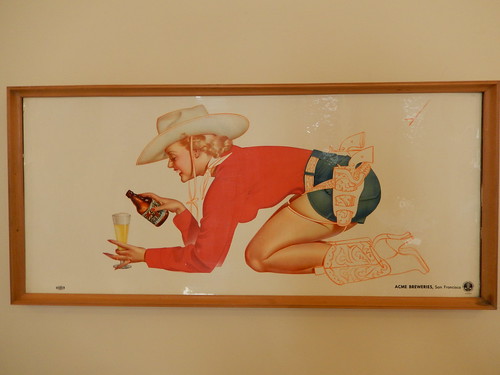 Today’s infographic is an interesting one. It was created by the makers of a new iPhone app, Beer Hunt, which looks to be giving Untappd a run for the money. It was created by Monkey Inferno, located in San Francisco. Essentially, it gives the stats of beer check-ins for Beer Hunt’s first ten days of use. It will be interesting to see it updated for the first month, first quarter, etc. to see how the data changes.

Tuesday’s ad is for Miller High Life, from 1949. The scene in the ad depicts a ceremonial burning of the mortgage — presumably because it’s now paid off and not in protest — with the assembled party goers toasting the event with beer, and making the comparison to champagne that Miller continually advanced as its selling point. It’s funny to think that there was a time when people actually paid off their mortgages in full and owned their homes outright, but it happened. It was even relatively common enough back then that it could be used in a beer ad. But when’s the last time you heard of that happening recently? 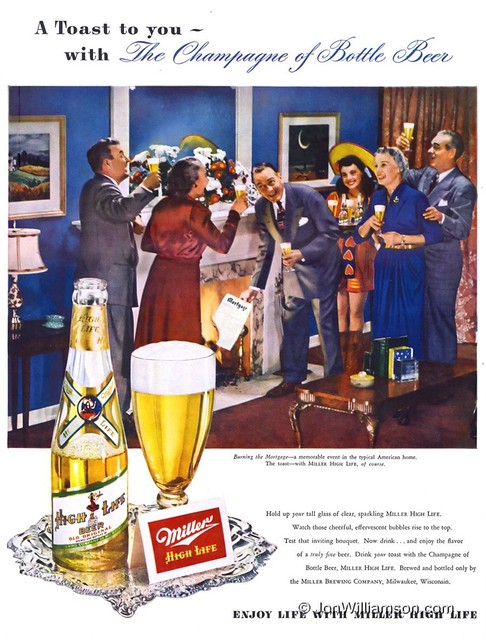