On Wednesday I flew to Boston to judge the finals of the Longshot American Homebrew Contest. This is the third year for the new contest, which Samuel Adams also did in the mid-1990s in a slightly different format. But the idea is the same. Homebrewers submit their beer, which is judged in regional competitions. The two big winners will then have their homebrew made commercially and bottled. There were 1300 entries this year which was whittled down to four, from which our job was to pick two. You can read more of the story at my post at Bottoms Up. 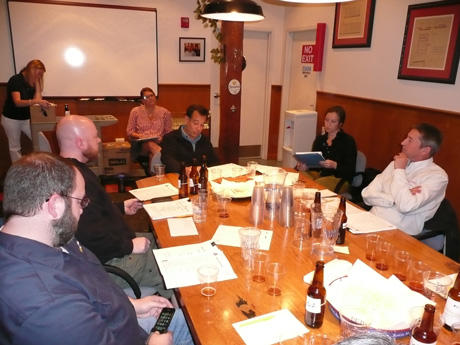 Jim Koch was at the head of the table, with six more of us there. 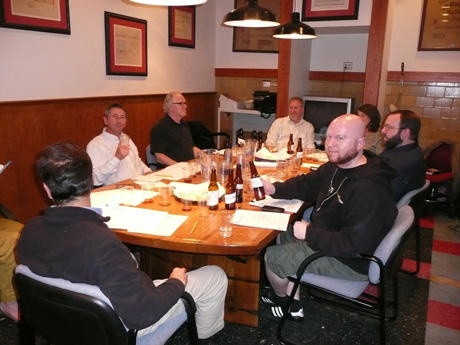 Todd Alstrom showing off one of the homebrew beer bottles. 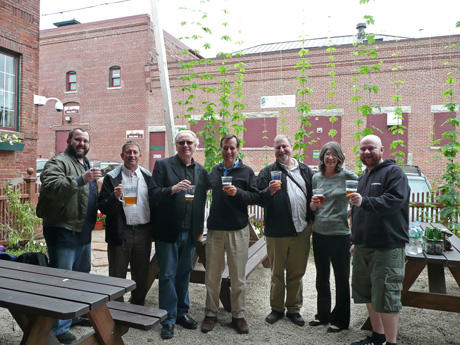 The seven of us, to break any ties, afterwards in the back garden picnic area. From left: Jason Alstrom (from Beer Advocate), Tony Forder (from Ale Street News), Bob Townsend (a food & drinks columnist for the Atlanta Journal-Constitution), Jim Koch (founder of the Boston Beer Co.), yours truly (on assignment for Celebrator Beer News), Julie Johnson (from All About Beer magazine), and Todd Alstrom (also from Beer Advocate).