Today is the 65th birthday of Tom McCormick, former Executive Director of the California Craft Brewers Association (CCBA), who just retired a couple of years ago, though is still doing some work with them. Tom’s also owned and ran a distributorship and the Pro Brewer website, worked with Wolaver’s for a time, but found his true calling promoting and defending small brewers in California. Tom is the most unflappable person I’ve ever met, and hands down one of my favorite people in the industry. Join me in wishing Tom a very happy birthday.

Below are the results of the 2019 inaugural California Craft Brewers Cup:

In addition to the individual awards, there were also two big awards, “Best in Show,” taken from the individual gold medal winners, and “Californa Brewery of the Year.”

California Brewery of the Year

In addition to the two big brewery awards, they also gave a Pioneer’s Award and the California Guild of the Year.

California Guild of the Year 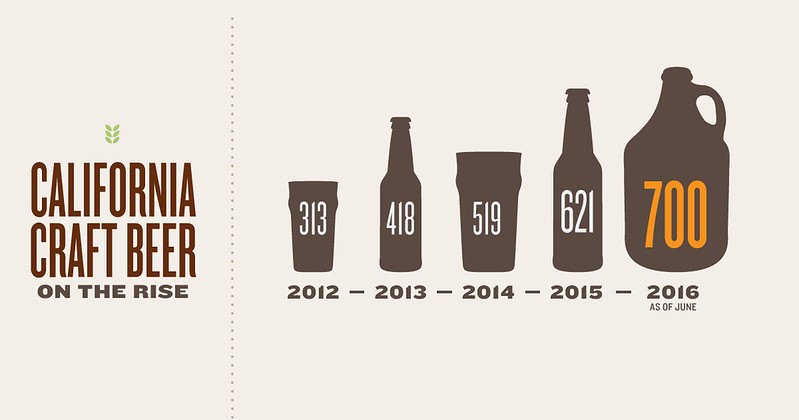 California has more breweries than many countries. So it only makes sense that we have our own world class, statewide events. This September, the CCBA will put on the second annual California Craft Beer Summit and Beer Festival in the state capitol of Sacramento.

The three-day Summit includes 24 educational sessions, 60,000 feet of interactive displays, 450 beers, 160 breweries and unlimited tastings. It’s an amazing event, especially the huge beer festival. I’ll be there again this year, and if you work in any part of the beer industry, or want to, you should be there, too. Here’s more information about it from the CCBA’s press release.

“California continues to lead the nation’s craft beer movement and the Summit showcases the wild success of a community united over a common passion: craft beer,” said Tom McCormick, executive director of the CCBA. “CCBA’s signature event is the ultimate opportunity for craft beer enthusiasts to join the tribe, learn from brewers and experts across the Golden State and taste the creativity and passion that serves as the foundation of the industry.”

Reigning as the largest California-brewed craft beer event of its kind, the 2016 Craft Beer Summit and Festival gives attendees a tasting tour through the state’s craft brewing landscape.

“At the Summit, beer lovers and brewers have the chance to experience wonderful techniques and ideas from the best of the industry,” said McCormick. “David Walker from Firestone Walker, Fritz Maytag, the founder of the American craft beer movement, the brewers and owners from AleSmith, 21st Amendment, Russian River Brewing Company, and many others will share their knowledge, history, expertise and passion with every person connected or passionate about the craft beer industry.”

Educational highlights at the Summit include:

“The Summit has become, in a very short period of time, one of the largest and most significant craft beer events not only in California but across the nation,” said Natalie Cilurzo, co-owner of Russian River Brewing Company and president of the CCBA Board of Directors. “The unique part about the Summit is the bringing together of brewers, retailers, wholesalers, suppliers, and consumers all in one location, something I have not experienced to this level at any other event. I’m proud to be a part of this incredible state trade association as well as the second annual Summit.” 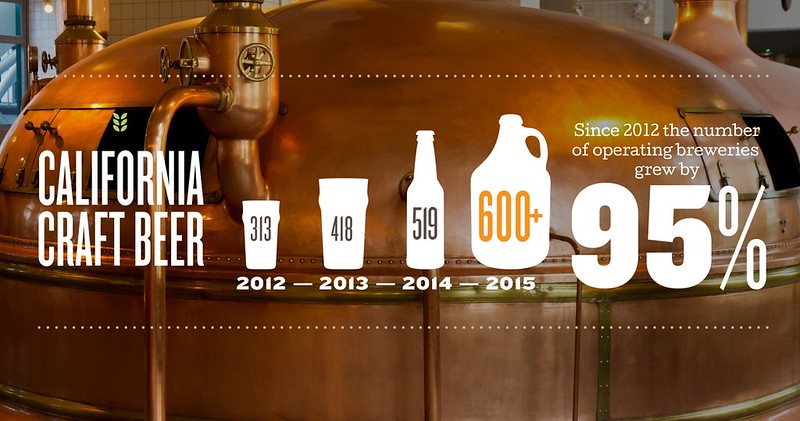 For me the biggest takeaway is how rapid the number of California breweries doubled. Fritz Maytag bought the Anchor Brewery in 1965, but the first new brewery opened over a decade later, in 1978. That was New Albion. It took until 2012, or 34 years, to reach 300 breweries. Three years later, this month in 2015, there are 600. That means half of the breweries in California are less than three years old, which seems remarkable.

The California Craft Brewers Association (CCBA) today announced another milestone in the growth of local brewing, with more than 600 craft breweries in operation across the state. More breweries call California home than any other state in the nation.

“We continue to celebrate the success of craft beer in California,” said Tom McCormick, executive director of the CCBA. “The Golden State is the birthplace of the American craft beer movement and continues to lead the nation with its committed fans and creative brewers. We have seen a remarkable and growing demand for neighborhood-supported craft breweries and handcrafted, locally produced beers. It’s an exciting time to be a craft beer drinker in California and even more exciting to be a craft brewer.”

The 18 percent increase in operating breweries over that past year represents a return to the localization of beer production. In 2014, an average of two breweries opened every week in California.

Industries associated with craft beer also continue to expand, with additional investment in California-grown ingredients. Breweries throughout the state are planting hops and barley and looking to local farms to source ingredients.

“California’s craft beer drinkers are looking to their neighborhood breweries for local, sustainable, hand-grown, hand-produced, hand-crafted beers,” said Jacob Pressey, owner and brewmaster for Humboldt Regeneration Brewery and Farm and CCBA member. “We are the first California brewery since Prohibition to brew a 100 percent house-grown and malted beer, a milestone we’ve been focused on for the past three years. Across the state we see hop growers, grain growers and craft maltsters set the stage for a sustainable, local-focused industry.”

As the number of craft breweries has increased, so has national recognition for creative styles and classic West Coast IPAs brewed in California. In 2015, California breweries received the largest number of awards at the Great American Beer Festival, contributed hundreds of millions of dollars and thousands of jobs to the state’s economy and donated approximately $11,050,000 to support local and statewide charities, including fundraisers for nonprofits and charitable causes.

This weekend, beginning Friday September 11, the California Craft Beer Association is holding the first-of-its-kind Craft beer Summit, a two-day event in Sacramento celebrating the rise of beer in the Golden State. It should be an amazing event that if you’re a beer lover you won’t want to miss, and will include many different experiences, ending with the the largest Beer Festival ever held in California!

It’s being hailed as the California version of the “Great American Beer Festival,” and with 150 breweries pouring their beer — as many as 400 different beers (including several brewed just for the event) — it’s an apt description. The CCBA is describing the event as “the showcase event for craft beer – a premier California craft beer festival. People from all over the state (and country) can come to Sacramento to see (and taste) our thriving craft beer scene. Our beers are coveted across the nation, so here is your opportunity to try all of them!”

But it’s also much more than just a beer festival. The summit will bring together retailers, wholesalers, brewery owners, beer enthusiasts and home-brewers for an educational, hands-on experience where they will be able to see, touch, smell and taste beer. There will be Educational Seminars both days, beginning at 9:00 AM, cooking and homebrewing demonstrations, panel discussions, talks by industry pioneers and insiders (including yours truly), an Expo and much more. You can find out more about the event here, and tickets are also available online.

Still not convinced? Here’s 8 Things You Don’t Want to Miss at the California Craft Beer Summit and Brewers Showcase Beer Festival posted by the CCBA. 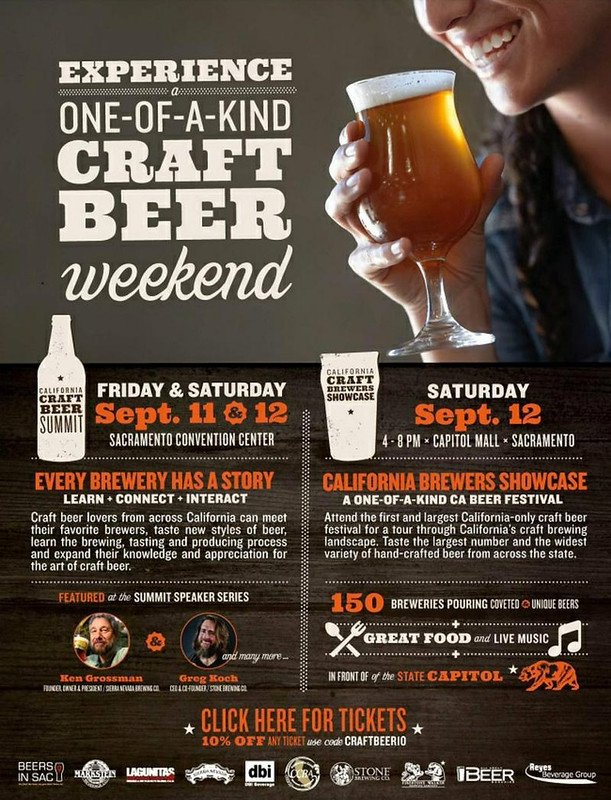 The California Craft Brewers Association (CCBA) recently commissioned an economic impact study of the state’s brewing industry for last year. And the news is pretty great. Here’s some of the highlights:

Economic Impact: In 2014 craft beer contributed more than $6.5 billion to the economy of California. That’s up 18% from 2013. That’s a fairly conservative number and they’ll have a more accurate and most likely higher numbers in June when the full report is finished. The craft beer industry in California has a higher economic impact than any other state in the US.

Exports: 1.3 million barrels. (That’s still higher than the total production of all but two other states (PA and CO)). 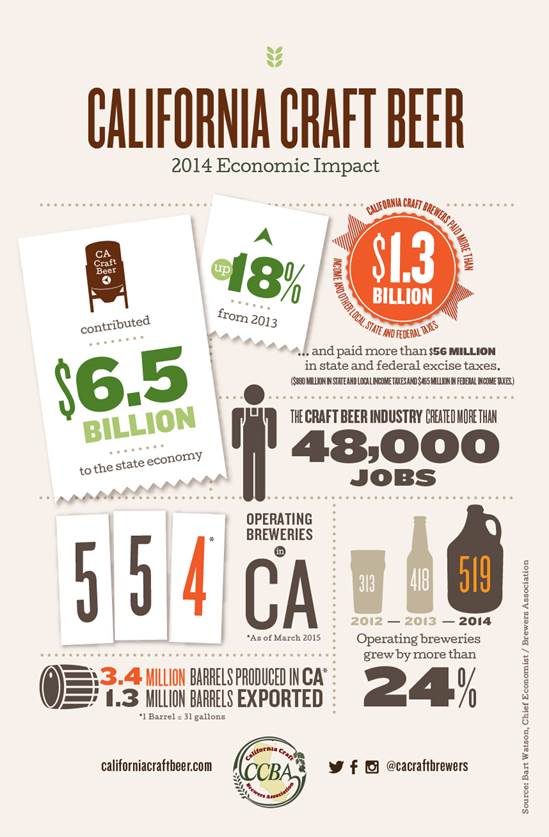 Early last month, the California Craft Brewers Association celebrated its 25th anniversary with a two-day conference in Santa Rosa. I gave a talk on the history of craft beer in the Golden State, and there many other seminars, including a wonderful panel discussion with three craft beer pioneers, John Martin (Triple Rock), Ken Grossman (Sierra Nevada) and Fritz Maytag (Anchor), moderated by Vinnie Cilurzo (Russian River). The Film Squad created a fun video showing an overview of the conference.

This year the California Craft Brewers Association (CCBA) celebrates its 25th anniversary, and they just concluded a two-day conference in Santa Rosa. I missed the first day (traveling home from Belgium) but gave a talk yesterday morning on the history of craft beer in California. But the highlight of day two was a panel discussion with three craft beer pioneers, John Martin (Triple Rock), Ken Grossman (Sierra Nevada) and Fritz Maytag (Anchor), moderated by Vinnie Cilurzo (Russian River). 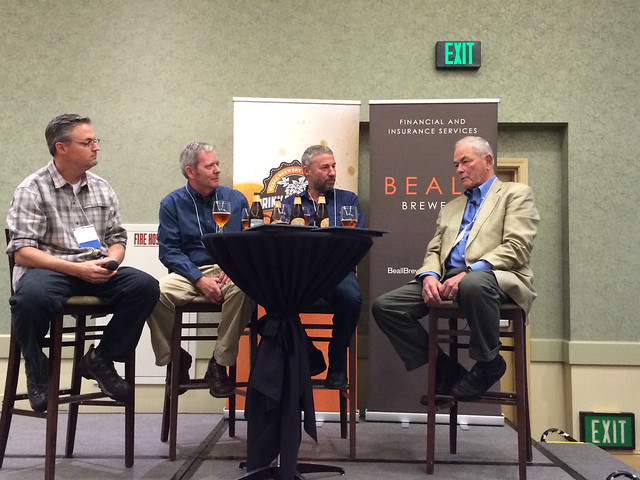 The trio spoke for around an hour, then the audience asked a few questions. I captured the main part of the talk (not the Q&A) in two parts (due to limitations of my camera) which you can watch below. There’s a short gap in between the two videos, only a few seconds. It’s a fun and fascinating talk. Enjoy. 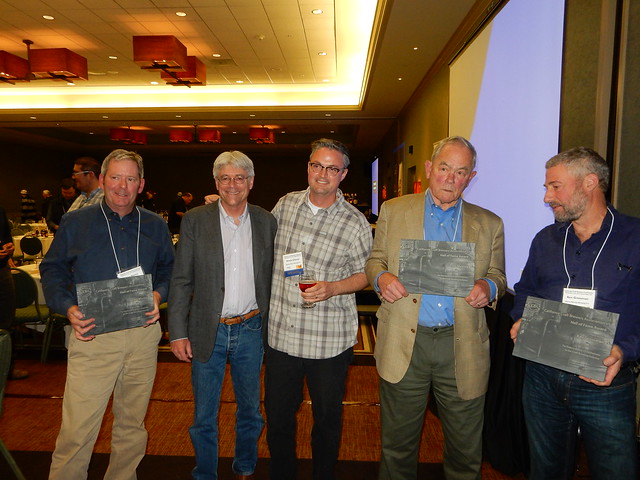 The California Craft Brewers Association will be holding a general members meeting in Southern California on May 19-20. The two-day event is open to all California Breweries, Breweries in Planning, Allied Trade Members and Distributor Members.

On Monday, May 19, Workshops and a Beer Garden BBQ will be held at Stone Brewing Company in Escondido, with the workshops taking place from 3-5 PM, followed by a BBQ from 5-7 PM.

On Tuesday, May 20, the CCBA General Meeting will be held from 9:00 AM to 6:30 PM at the Center for the Arts in Escondido, and will include a beer social.

More details about the meeting are available at the CCBA website. 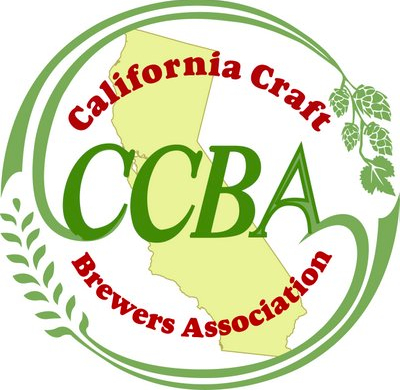 In case you’ve missed all of the reminders and e-mail blasts, today is the last day to register for the California Craft Beer Association‘s Northern California General Meeting, which will take place October 29 at the University of California Davis Conference Center, located at 550 Alumni Lane, Davis, CA 95616. You can register online via Eventbrite, and check out the schedule of the day’s itinerary.